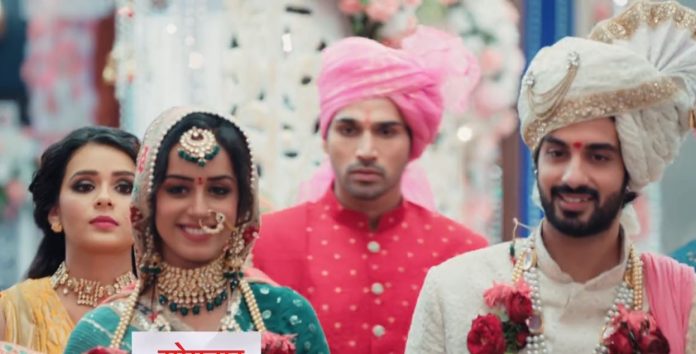 Yeh Hai Chahatein 4th October 2021 Written Update First night twist After Prisha and Rudra’s marriage, they get a happy moment with Saransh. They realize that Saransh is slowly recovering his memory. Saransh asks Prisha where did she go, why did Rudra and she come to save him from the danger. Prisha and Rudra get too happy realizing that Saransh’s memory is back. They get a big surprise from Saransh on their marriage day. Saransh tells that Ahana and Mishka took him away and troubled him a lot. He reveals that he forgot everything because of the medicines fed by Ahana. He regrets that he forgot their happy family. Sania and Armaan didn’t expect Prisha and Rudra to face this twist. Prisha and Rudra unite with Saransh.

Rudra asks Saransh if he remembers everything. Saransh tells that Rudra is his dad, the best dad in the world. He hugs Prisha and Rudra. Sania asks Armaan to move on in his life, since Prisha and Rudra got married. She doesn’t want him to plan anything further and waste his time. Armaan tells that its just the marriage completion, but he has a plan to hinder her first night. He enters Rudra’s room secretly. He sprinkles the itching powder on the bed. He fixes a spy camera in the room. He keeps an eye on Prisha and Rudra. He finds them romancing, and awaits his plan to create a trouble for them. Will Armaan succeed in his plan to ruin their first night? Keep reading. Comment if you like this show.

Prisha and Rudraksh hug Saaransh. Rudraksh asks Saaranash if he has recalled everything from his past. Saaransh says, “yes dad, you are my best dad and my mom, worlds best mom. Prisha, Saaransh and Rudraksh happily hug each other again. Rudraksh and Prisha promise Saaransh to never let him go away again. Saaransh tells that Ahana troubled him a lot. She used to give him strong medicines and made him look like a girl. Prisha asks him not to recall all that. Rudraksh hugs Saaransh and promises him that he will never let him go away. They ask him to not be scared.

Saaransh says he is mumma’s brave boy and dad’s strong boy. Anvi apologizes to Prisha. Prisha asks why she is apologizing. Anvi tells her that she and Saaransh were fighting and he fell down. Saaransh also tells that Anvi is telling the truth as he fell down due to water on the stairs. Prsiha and Rudraksh praise the kids for being good and honest. Anvi asks Prisha is she angry with her, does she love her? Prisha makes Anvi sit on her lap and says she is not angry and loves her a lot. She further tells the kids that both of them are the same for her. Sharda asks Prisha to return to Khurana house.

Prisha takes a leave from Armaan’s house after her bidaai. Sanya taunts Armaan for failing to stop Prisha. She further taunts Armaan and asks him to accept the reality and move on. Armaan says he can’t forget Prisha and says he will not let Prisha and Rudraksh’s first night happen. At Khurana Mansion, Sharda performs Prisha’s Griha Pravesh. Prisha happily drops the kalash and makes her footprints on the entrance of the house. She also makes handprints on Khurana house’s wall as the Lakshmi of the house. Prisha and Rudraksh also perform the ring ritual. GPS supports Rudraksh, while Sharda and Vasudha support Prisha.

Armaan secretly enters Rudraksh and Prisha’s room through its window. He puts the itching powder on the wedding bed and also puts a camera in the room. Sharda sees Armaan and asks him how he came into the house. Armaan lies and successfully manipulates her. Sharda makes the newly weds perform the barfi ritual. Armaan feels awkward and Preesha wins it. He takes Anvi and leaves. He apologizes to Prisha in his thoughts for stooping so low. Rudraksh takes Prisha to their room. Prisha recalls her past in the same room. Rudraksh gets romantic with Prisha.

Prisha feels shy. Rudraksh removes Prisha’s jewellery and gets close to her. Armaan watches them through his planted camera. He gets angry. Rudraksh lays Prisha on the bed and tries getting intimate with her. Prisha feels itching. Rudraksh asks her to not joke with him. Rudraksh too feels itchy. They get up from the bed. Prisha says there is some problem in his room. Rudraksh finds the powder on their bed and thinks someone did mischief with them, they wonder who would have done it.

Armaan gets happy thinking his plan got successful. Rudraksh takes Prisha to the bathroom. He tells her that they will celebrate their first night in the bathroom only. In the next episode, the next morning will be seen. Rudraksh and Prisha standing in their bathrobes will think what to do with their ruined bed now. Prisha will give Rudraksh the idea and both of them will put their bed on the floor. Armaan will get tensed and angry seeing Rudraksh and Prisha getting intimate. He will think to stop them. Someone will knock Prisha and Rudraksh’s bedroom door and interrupt their romance. Rudraksh will open the door.

Reviewed Rating for Yeh Hai Chahatein 4th October 2021 Written Update First night twist: 3/5 This rating is solely based on the opinion of the writer. You may post your own take on the show in the comment section below.