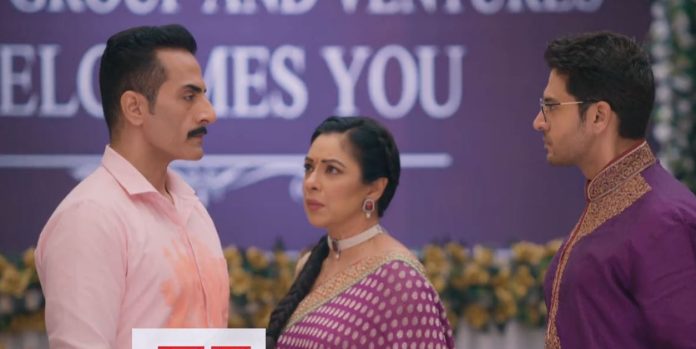 Anupama 6th October 2021 Written Update Line crossed Anuj pacifies Pakhi in a good way, and asks her to never doubt Anupama, his friendship with Anupama will come never between their relations. He wants her to understand their friendship. He also befriends Pakhi. Pakhi likes him, who is much cool than Vanraj. While Anupama is happy to see them bonding, Vanraj is angered. Pakhi defends Vanraj, until the moment he creates a big scene. Anupama asks Vanraj to burst out whatever is going on in his heart. Vanraj confronts Anuj. He tells that he will talk straight and not like a coward like Anuj.

Kavya is afraid that Vanraj will lose everything because of his ego. Vanraj tells the family that Anuj is either bribing him or giving him a charity because of Anupama. Anuj tells that his team has sent the business offer finding their startup a good one. He wants Vanraj to thank the investor, instead insulting him. Anuj taunts Vanraj about his misplaced anger. He reminds that Vanraj had submitted the proposal to his company, he shouldn’t get angry on its acceptance. Vanraj tells that he doesn’t want any charity.

Vanraj crosses his line. Anuj wishes that Vanraj talks a sensible thing. Vanraj blurts the truth, that Anuj is a big businessman and is thinking of his benefit. He calls Anupama a benefit for Anuj. He raises a question on Anuj and Anupama’s relation. Vanraj tears the offer letter and burns it. He challenges Anuj to have an affair with Anupama as and how he wants to. He tells that he doesn’t care if Anuj wants Anupama in his life. Vanraj gets shameless in his speech like always. Anupama has her own live to live, but she always faces humiliation. Do you also think that Vanraj has crossed his line this time? Comment your views. Keep reading.

Vanraj announces that Anuj can openly and shamelessly do anything he wants and keep terms with Anupama. He threatens Anuj. He stoops low and asks him for a fight. Anuj asks Vanraj to stop him and think of his age. GK and Hasmukh explain them the same thing and ask them to stop it. Vanraj asks Anuj to continue his poetry and love Anupama, but stay away from his family. He tells that Anupama doesn’t belong to him, but the family belongs to him. Anuj shouts and asks him to get out.

Vanraj tells that he has come for a havan, he won’t go without giving a sacrifice. He burns up the offer papers. Anupama is disturbed by the sight of his jealousy speaking up by ruining his total senses. She didn’t know Vanraj will stoop so low. Vanraj gets Anupama and Anuj’s pictures as well, and tears that to burn. Anuj, Anupama and everyone else watching feel disgusted. Vanraj declares that Anuj will have no connection with his family and his children, he will just have terms with Anupama.

He threatens that if Anuj and Anupama’s affair becomes a problem for his family, then they will regret a lot. He angrily asks Anuj to stay away from his family. Anupama feels embarrassed that her ex-husband has no faith on her, he has questioned her dignity because of her friendship with Anuj. She didn’t know that Vanraj will ruin her big day. Vanraj, Leela and Kavya return home. Kavya asks Vanraj why did he fight with Anuj. Leela supports Vanraj. Kavya asks Vanraj why does he have much ego that he is getting against Anuj.

She feels they have a poor financial situation, Anuj will ruin them if he has to take revenge after Vanraj’s threatening. Vanraj tells that he will never beg to Anuj for money. Kavya asks him to never say never. Anuj grows worried for Anupama. He finds her sobbing at some corner. He also sheds tears seeing her tears. He still manages to stay strong to console Anupama. He knows whatever Vanraj has said or done was totally wrong. He wants to share Anupama’s grief. She apologizes to him.

She blames herself that she is the reason for Anuj and GK’s insult. She curses her fate. She tells that he didn’t reap any profit from their partnership, the drama will happen daily and bring humiliation for him. He apologizes for crossing his limits, and intervening in her personal life. He says that he never thought he would speak in his family matters, but he has to speak right now. He asks her not to blame her fate, she has a big family and a best friend like Devika, while he just has GK.

He asks Anupama not to care if few of the family members don’t support her. He pacifies Anupama. He tells her that she shouldn’t tolerate anything now, else it will encourage others to misbehave with her. He adds that Vanraj or anyone has no right to ill-treat her. He explains that nobody has a right to insult her. He encourages her to come out of the bad life, instead fighting every day and tolerating Vanraj. He knows that she will be broken inside if she decides to intake the poison spreading in the relationships.

She asks him what she can do in this situation. He asks her if she stayed with the family for their happiness. He makes her realize that the family isn’t happy. He exclaims that she isn’t happy as well, if Vanraj hates her, then he will never let her stay happy. He gets philosophical to state that love can stay distant, but hatred can’t be held close, the same way like one can’t fly by tying chains, the one who wears the chains can never break it.

He encourages her to break chains, regarding Vanraj as the chained link in her life. He wants her to live free and fly, rather than living a suffocated life. He permits her to get away from him if she wills, but requests her to keep her self-esteem and stay close to her own happiness. He assures that he isn’t leaving her alone, but with herself. Anupama gets someone sensible in her life, who understands her irrespective of her life’s worst circumstances. Anuj gives a hanky to her to wipe her tears. He goes away to hurt himself in rage over Vanraj’s poisonous speech.

Meanwhile, Hasmukh apologizes to GK for Vanraj’s demeaning act. GK forgives him, because Hasmukh isn’t at fault. Bhavesh tells Hasmukh that Vanraj is still an egoistic man, he will never forgive Vanraj for this mistake. He promises to not spare Vanraj if he crosses lines again. GK tells Devika that Anupama has been tolerating a lot since the last 26 years, Vanraj would have humiliated her every day by his wrong actions and words. Devika pities Anupama. She wants Anupama to welcome Anuj in his life. Anupama and Anuj stay affected by Vanraj’s words. Anupama gains confidence by Anuj’s words to face Vanraj and show him his actual place in her life. Stay tuned for next.

Reviewed Rating for Anupama 6th October 2021 Written Update Line crossed: 5/5 This rating is solely based on the opinion of the writer. You may post your own take on the show in the comment section below.