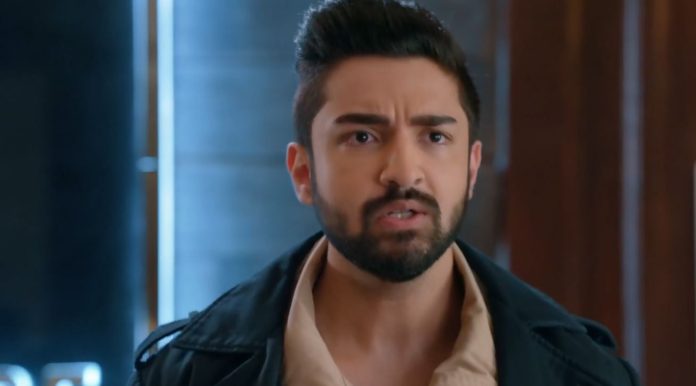 Bhagya Lakshmi 5th October 2021 Written Update Rishi shocked Ayush compliments Lakshmi for the boxing match with the media. Lakshmi regrets bashing the media. She thinks she has done wrong to answer them like that. He tells that he has done a right thing, she has shown faith on Rishi and now the media and public will believe Rishi. He is thankful to her that she did something that Rishi’s family couldn’t do till now, she stood by Rishi with full confidence and amazed everyone. He is happy the way Lakshmi handled the matter. He tells that the public is finally thinking that Shanaya is wrong, and Rishi is right.

Lakshmi decides to meet Shanaya to find the root cause of the accusation on Rishi. She is sure that they can meet Shanaya and solve the fight by talking calmly. She wonders if Shanaya is taking some sort of revenge on Rishi. Ayush tells her that this matter is complicated. He adds that Shanaya will not reveal anything on her questioning. He agrees to send her to Shanaya. He offers help to Lakshmi and also alerts her to be careful of Shanaya, who is really cunning. Shanaya is happy that she is on every news channel. She likes to get famous by ruining Rishi’s name. Lakshmi arrives to meet Shanaya. Shanaya blames Rishi for molesting her.

Lakshmi loses her cool on hearing wrong about Rishi. She tells that Rishi saves respect of women, he isn’t from one of those molesting men like Shanaya is alleging. She tells Shanaya that she will get herself insulted in the end. Malishka feels insecure thinking Lakshmi will save Rishi from Shanaya’s names and win Rishi’s heart.

She doesn’t want to lose Rishi. Rishi finds Lakshmi in his office. Ayush wants Rishi to know that Lakshmi has once again saved him. Rishi gets to see the shocking news on the tv. Lakshmi gets caught by the media again, and this time she gets alleged by Shanaya. Shanaya accuses Lakshmi for bribing her to save Rishi from the molestation case. Shanaya frames Lakshmi badly. Rishi is shocked to know that Lakshmi has fallen into a deep trouble. Keep reading.

Aayush asks the secretary to fix the meeting with foreign investors at 11 and they will not have lunch today. He also asks to send Sudhir inside the conference room after their meeting. Aayush stops Lakshmi and asks her about the one-sided boxing match with the media. Lakshmi says that she knows she spoke a bit too much but as they were speaking badly about Rishi and she could not hear it. Lakshmi says she made a mistake. Aayush says to her that she did not make any mistakes but did the right thing. He tells that nor he, Malishka, or Virendra ever did that for Rishi and Lakshmi becomes glad. Aayush also informs Lakshmi that the media also praised her for having such great confidence in her husband.

Aayush says that till now the media was only trusting what Shanaya was saying but after Lakshmi’s statement they have broken down into pieces. He tells that now people are finally feeling that Rishi is telling the truth and that Shanaya is wrong. Lakshmi decides to speak to Shanaya and solve the issue. Aayush says that it is not a good idea but Lakshmi insists on trying once to speak with her.

Aayush agrees to give her Shanaya’s address but requests her to be careful as she is very clever. Aayush insists Lakshmi to give him a call if anything goes wrong. Shanaya is happy that she is all over the newspapers as Rishi is a big public figure. Shanaya is shocked to see Lakshmi at her doorstep. Lakshmi argues with Shanya that Rishi respects women and preserves their dignity. Lakshmi says that she has hurt Rishi and his family and questioned his values and culture. She says that he has grown among his sisters, aunt, and grandmother which makes him automatically respect women and behave nicely with them.

Lakshmi questions Shanya’s values and culture which angers her but she is not ready to reveal the truth. Shanaya informs Lakshmi that he molested her and also dragged her out of his cabin. Shanya tells Lakshmi that she might have proved herself if Rishi’s CCTV camera of his cabin worked that day. Lakshmi tells Shanya that she does not need any other evidence to consider Rishi innocent. Lakshmi threatens Shanaya that if the whole world also speaks against Rishi she will not believe any of them.

Lakshmi scolds Shanaya for lying and also shaming those girls who have really fallen prey to assaults and says that due to her false accusations people will not believe them too. Lakshmi warns Shanaya that being a woman she is becoming the enemy of other women. Lakshmi also calls out Shanaya for trying to destroy Rishi’s reputation as it will not be possible as Rishi is above her in all terms. She tells Shanya that those who try to throw mud above it often land on their own face.

Lakshmi asks Shanaya to pray to God to give her brains to accept her mistake and reveal the truth. Shanaya stops Lakshmi and says sorry for not thinking about Rishi and his family or her while accusing him as she was angry. Shanaya realizes her mistake and agrees to take back her complaint but tells Lakshmi that Rishi should not slap a defamation case on her. Shanaya tells Lakshmi that she will not go to the police station as they may arrest her. She says that she only trusts Lakshmi and asks her to get the papers ready to take back her complaint. Shanaya confesses to Lakshmi that she will not fake anything now but make a legal statement where it will be written that her interview with Rishi had gone bad and that is why she created this drama.

Shanaya reveals that as Rishi has grown up among so many women he cannot do anything wrong and she cannot accuse such a great human being like Rishi. Lakshmi tells Shanaya that as she has realized her mistake that mistake is over now and goes to make the papers ready so that Shanaya takes back her complaint. Lakshmi is very happy and feels that once Shanaya withdraws the case Rishi’s tensions will go away. Shalu calls up Lakshmi and asks her about Rishi and says not to believe other people who are speaking ill about Rishi. Lakshmi tells about her conversation with Shanaya and Shalu calls her Rani Jhansi. Shalu taunts her aunt and cousin for speaking wrongly about Rishi.

Lakshmi informs Aayush that Shanaya is ready to take back the complaint. Aayush hugs her and calls her the miracle machine. Aayush asks her to wait for 5 minutes as he will be back with papers from the legal department. Aayush asks her to wait in his cabin. Lakshmi sees Rishi working and gets mesmerized looking at him. Aayush smiles and goes away without disturbing her. Rishi sees Lakshmi and feels he is dreaming and closes his eyes but Lakshmi hides. Rishi is puzzled that he saw Lakshmi but can’t see her now. Lakshmi feels why did she hide but didn’t also want to disturb him. Lakshmi again sees Rishi doing his work and smiles. Aayush hands the papers to Lakshmi and she assures him to get it done. Aayush tries to disturb Rishi but he tells him to go away.

Karishma tells Malishka to buckle up as Lakshmi is moving forward with speed but Malishka says that she tried to talk to Shanaya but the cheap girl is not ready to listen. Karishma advises her to stop Lakshmi from becoming a great figure in Rishi’s eyes. Karishma tells Malishka that Lakshmi should only perform the task she has been brought here for but she is going beyond that and taking a stand for Rishi. Malishka decides to speak openly with Rishi about it. Shanaya turns the tables on Lakshmi and tricks her. She blames Lakshmi that Rishi sent her to bribe her and threaten her so that she signs the papers and takes back her complaint.

Shanaya calls the media reporters who are hiding and they attack her with questions. Karishma asks Rishi to switch on his TV and see what blunder Lakshmi has done. Rishi gets angry with Lakshmi. Virendra watches her on TV and asks her to leave immediately from there. Shanaya accuses Rishi of bribing her through his wife and gives a statement to the media. Shanaya says that when she refused to take money Lakshmi threatened her that she will not get a job anywhere else and Rishi will destroy her life. How will Lakshmi tackle the situation? Will she be able to prove Rishi innocent after this big backlash? Keep reading.

Reviewed Rating for Bhagya Lakshmi 5th October 2021 Written Update Rishi shocked: 2/5 This rating is solely based on the opinion of the writer. You may post your own take on the show in the comment section below.