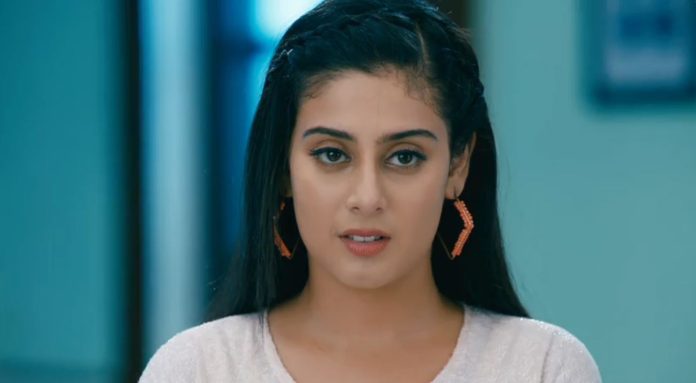 Udaariyaan 5th October 2021 Written Update Big shocker Fateh tells Tejo that he will help her and sort the mess, before the news of the question paper leak reaches the family. He tells her that the principal will not take an action until they have the alloted time in their hands. He asks Tejo to reset the papers and he will make sure that the new question paper set reaches all the colleges. Like he trusts Tejo’s ability, he wants Tejo to trust him too. He tells her that he will handle everything for her sake, for Khushbeer and the family’s sake, since he has done a lot of mistakes to hurt Tejo and the family. He feels too guilty for wronging Tejo’s life and future.

Fateh wants to rectify his mistake and lessen the burden on his heart by proving Tejo’s innocence in the mess. Tejo’s shaken state makes him very sure that she is being framed by someone. Fateh promises Tejo that he won’t share anything about the problem with Jasmin. Tejo doesn’t want Jasmin to know anything and spread it further to demean her. She is more worried for Khushbeer’s respect than her own career and dreams.

Tejo doesn’t want to bring disgrace for Virk family, after whatever happened with Fateh because of Jasmin. Tejo agrees to take Fateh’s help. Fateh takes her along and encourages her to reset the paper as soon as possible.

Jasmin’s evil plan brings Fateh and Tejo together once again. Jasmin grows curious to know how Tejo is dealing with the problem. She finds Tejo normal and okay. She wonders if her plan worked or not. Tejo rushes to reset the question paper for the upcoming exam in an urgency. Fateh meets his friend Navjot and asks him for help in printing the question papers in bulk to distribute in the colleges. Navjot tells that the bulk printing will take good hours. He adds that he can call his staff to help Fateh. Fateh asks him not to involve any staff, because its a confidential matter.

Tejo informs Fateh that she has made the new set of papers ready. Fateh asks her to mail it to him quickly. Navjot informs Fateh about the powercut which will delay the printing by more hours. Tejo overhears their conversation and panics. Jasmin wants Tejo and Virk family to get defamed, leaving no option for the family to kick out Tejo. Its really good to see Fateh’s concern for Tejo, which proves that his humanity and goodness didn’t die along with the end of their relation. He still keeps friendship with Tejo.

Jasmin’s demeaning act will be exposed, and a big drama will be followed when Jasmin falls in Fateh’s sight. Tejo will be finding Jasmin’s connection in the whole mess, and expose her truth once again. Jasmin’s truth will be getting revealed. This time, will Jasmin’s big mistake become an eye-opener for Fateh? That will be real big shocker for Fateh. Comment your views and keep reading.

Tejo starts making the new question paper set. Fateh is worried for Tejo. He remembers his word, that he will hide the matter from Jasmin. Jasmin gets the cake for him. He tells her that they shall celebrate with wine. He asks her to celebrate with him in French style, it will be fun. He makes her drink, and throws away his drinks. He makes sure that Jasmin gets too drunk and falls asleep, till he goes to help Tejo. He feels bad to do this with Jasmin, but has no option. He rushes to Tejo and gives her a cup of coffee. He asks her to hurry up with the work, until he checks the printing call.

He calls Navjot and calls him at his office. He rushes to Navjot’s office and learns that the printing will take good time, and to add up to their problems, the powercut occurs. Tejo gets stressed. She goes to pray for the family’s pride and the future of students. She doesn’t want her innocent students to get punished for someone’s mistake. The next morning, Tejo awaits Fateh to know if the papers got printed. She loses hope, seeing the time. The grace time given to Tejo is finally over.

Meanwhile, Jasmin meets Sweety in the college. She tells Sweety that Tejo will be insulted in front of everyone. She wants to enjoy Tejo’s sorrow and insult. Tejo meets the principal to know about the situation. Principal tells Tejo that the exams have started, the students are giving their exams. She asks Tejo to relax. She asks Tejo if her husband didn’t tell her that the question paper is changed in time. Fateh meets Tejo there. Principal tells that she is really impressed with Fateh’s work, he has saved the college reputation in time. Fateh tells Tejo that he had arranged the generator to get the power restored. He didn’t let the printing stop.

The students who copied the leaked question paper and prepared accordingly, get befooled. They get upset that the college had changed the papers overnight. Jasmin learns that her plan has failed. She is shocked. Fateh asks the Principal to file a complaint in the cyber cell and find out the culprit who leaked the papers. Jasmin gets frustrated that her hardwork got waste.

Fateh saves the day for Tejo. Tejo thanks Fateh for saving her from falling in everyone’s sight. She is glad that her commitment and sincerity isn’t questioning. She thanks him.

He tells her that he has done wrong with her, he wants to revive their friendship. He asks her if she will become his friend again. Tejo refuses to accept his friendship. She tells that they are okay just as strangers, he is a good person and helpful also, its better if they stay away. She asks him to do another favor. She doesn’t want him to reveal anything to Jasmin. She doesn’t want any more drama in the house. Jasmin overhears their conversation. She realizes that Fateh has helped Tejo.

Sweety asks her not to tell anything to Fateh, else Fateh will rebuke her for the misdeed. She asks him not to confess anything to Fateh. Fateh leaves from the college. Tejo goes to meet Simran and picks up Candy. She brings Candy home. Khushbeer plays with Candy. Jasmin returns home only to find Tejo happy. Gurpreet calls up Tejo to request her to convince Khushbeer for attending a family function. Tejo asks Khushbeer to go to the function. Khushbeer is scared for the public humiliation. He refuses to go out. He wants to stay at home.

Tejo asks him not to bear the punishment for his chidren’s mistakes. He tells that he has to earn back his respect by facing the world. Khushbeer agrees to Tejo’s request. Candy finds the pendrive in Tejo’s room. He asks Tejo about it. Tejo finds Jasmin’s pendrive. She suspects that someone had taken her laptop to leak the papers. She checks the pendrive and gets Jasmin’s documents. She realizes that it belongs to Jasmin. She hears Amrik and Mahi’s conversation. She connects the dots to realize that Jasmin has made this evil plan. She goes to confront Jasmin. She scares Jasmin by calling the cyber call about the culprit who leaked the accountancy paper. Jasmin is shell shocked. Keep reading.

Reviewed Rating for Udaariyaan 5th October 2021 Written Update Big shocker: 3/5 This rating is solely based on the opinion of the writer. You may post your own take on the show in the comment section below.