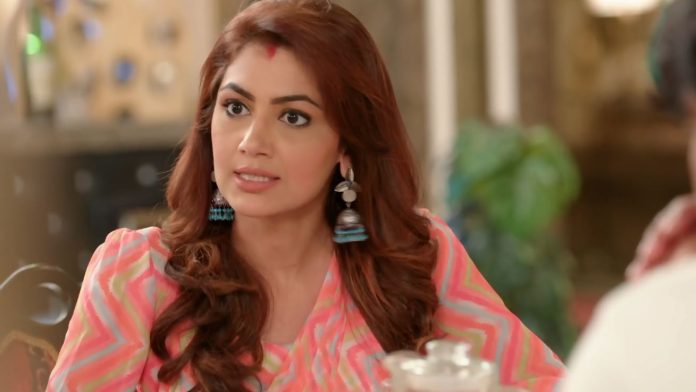 Kumkum Bhagya 6th October 2021 Written Update Pragya’s rules Rhea tells Shaina that Ranbir got married to Prachi, and they are living in the same house. Shaina asks Rhea to forget Ranbir, who can never be of her now. Rhea tells that she already started working on her plan, she will snatch Ranbir from Prachi and marry him. Shaina asks her how will she do it. Rhea makes a plan to stop Prachi from coming along with them. She adds that if Prachi succeeds in surprising Ranbir, then Ranbir and she/Rhea will never unite. She doesn’t want Prachi to come along with her to Bangalore.

She tells that she has to do anything to stop Prachi. She spills the oil on the floor. She thinks this idea always work, it doesn’t fail ever. She wants Prachi’s leg to break. She thinks once Prachi’s leg bones break, then she won’t be able to go anywhere with Ranbir. Shaina brings Prachi downstairs. Prachi prepares to leave for the airport. She carries a bag along. Rhea signals Shaina. Prachi slips on the stairs, but balances herself. She doesn’t fall down. Abhi, Pragya and family eats the breakfast prepared by Mitali. The family wants to complain to Abhi, but Pragya has already brainwashed him. Abhi doesn’t say anything.

Pragya tells that its no shame to do work for own self, one should be independent to carry out day to day activities on own. Abhi agrees with Pragya, but he knows that his family is lazy. Aaliya mentions an idea that they hire a cook for themselves, if Pragya doesn’t let her staff cook the food for them. They next argue on the cleaning tasks. Pragya blames Aaliya for not doing any work and not letting anyone else work. Tanu tells Aaliya that Pragya’s house is really big, if they hire any servant, then the servant will demand a big amount. She suggests that Aaliya and she should clean the house themselves. Keep reading.

Pragya laughs when Abhi praises the Poha made by Mitali. He tells that he decided that she will make lunch and dinner for him. Mitali tells that Pragya’s staff will cook for them. Abhi tells that Mitali cooks the best, she should cook for them. Pragya asks Mitali how can she refuse to Abhi’s request. She asks Tai ji to help Mitali. Mitali also wants some helper to lessen her burden. Pragya argues with Aaliya, and rebukes her for making elders work as servants. She asks them to work if they want to stay in the house. Tanu tells that Pragya is bossing around, she can’t humiliate them as servants. She adds that even she has money now, she has respect as well.

Ranbir tells Prachi that he will miss her a lot, he wants her. She asks him to hand over the conference quotations to Siddharth. He checks the file and tells that the conference is in Mumbai at night. He thinks Siddharth won’t be in Bangalore when Rhea reaches there. Sushma asks Aaliya and Tanu to clean the house. Aaliya wants to keep a servant and solve their problem. Tanu doesn’t want to pay a hefty amount to the servants. She tells that they will clean the house themselves and pass time.

Baljeet laughs seeing the family ladies arguing because of the household chores. Pragya assigns them the cooking and cleaning duties. Tanu and Aaliya rage up seeing Pragya’s laugh. Rhea and Shaina execute their plan to make Prachi fall down and break her leg. Shaina meets Ranbir and Prachi. They get surprised. Shaina sweetly apologizes to Prachi for her past mistakes. She tells that she is happy to see them together. Ranbir excuses himself for an important work. He asks Prachi to talk to Shaina about their friends. Prachi and Shaina go downstairs. Prachi asks her to have tea.

Dida convinces Pallavi to send Prachi with Ranbir. Pallavi agrees to send them. She tells that she doesn’t care if Prachi stays at home or not. Rhea gets away from their sight and spills the oil on the floor. Pallavi asks Rhea why didn’t she tell her about Shaina. She doesn’t like missing to treat guests well. Rhea tells that she called Shaina in excitement, she will not judge them. She apologizes to Pallavi. Prachi sees the oil on the floor and stops. She doesn’t step over the oil. She asks Shaina to stop and not go ahead, else she will fall down.

Dida realizes that Rhea was near the staircase, she has spilled the oil. Rhea thinks Prachi got saved because of her fate. She doesn’t want Prachi to come with Ranbir. Pragya gets Abhi’s family ladies at work. Sushma loves the peace at home. Pragya wants their minds to stay diverted. Tanu tells Mitali that they have come to win over Pragya, the big bungalow will belong to them soon. Prachi gets tea for Ranbir. She finds him busy in work. She wants his attention. He apologizes to her. He pays attention to her. She tells him that she is coming with him to Bangalore. He gets surprised. Stay tuned.

Reviewed Rating for Kumkum Bhagya 6th October 2021 Written Update Pragya’s rules: 4/5 This rating is solely based on the opinion of the writer. You may post your own take on the show in the comment section below.