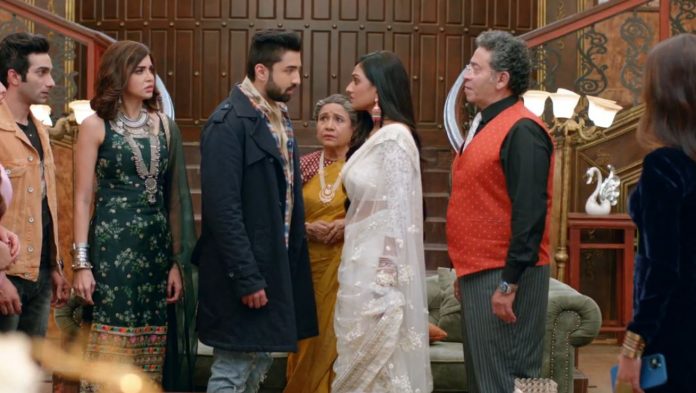 Bhagya Lakshmi 6th October 2021 Written Update Huge drama Lakshmi is left crying when reporters target her with questions. Virendra calls her and repeatedly asks her to sneak out of Shanaya’s house. Lakshmi gathers courage and leaves. Shanaya creates yet another emotional drama in front of the reporters and they all assure her that they are with her for support. Shanaya targets Rishi’s image again and tells how weak he is to send his wife to bribe her in taking the case back. She also tells the media that Lakshmi forgot the papers in which everything is written and what she has already told them. Reporters believe Shanaya and Rishi’s reputation gets another setback.

At the Oberoi mansion Malishka, Karishma, and Sonia are happy that they did not have to do anything and Lakshmi herself fell down in Rishi’s eyes. Sonia and Karishma tell Malishka to take advantage of this mess and be great in front of Rishi. Malishka agrees with them and says that she knows how to handle a village girl like Lakshmi. Karishma and Sonia also join hands to support her in her goal. Neelam is tensed and asks Virendra about Lakshmi’s whereabouts and sees the news in which Lakshmi is called the culprit who came to bribe Shanaya.

Neelam becomes angry and tells Virendra that Lakshmi can save Rishi from crises due to her strong Kundali but she cannot do anything in this case as she is a village girl and doesn’t know how the city is. She further says that village girls are good at handling house, kids, and elders but they cannot cope with city life. Neelam points out that a girl like Malishka can handle critical issues cleverly but Lakshmi cannot do it. She is angry with Virendra for allowing Lakshmi to go to Shanaya’s house and speak to her. Lakshmi reaches home and meets Rishi outside.

Rishi asks Lakshmi about creating the blunder but Lakshmi starts crying and asks sorry for committing that mistake as she was not aware that Shanaya will play a game with her. Rishi melts seeing Lakshmi cry and forgives her even though he is upset with her. Lakshmi says that she tried to tell the media that Rishi did not send her to bribe Shanaya but Virendra asked her to leave that place so she left in a hurry and left the papers there only. Rishi doesn’t like to see Lakshmi cry and tells her that it is ok. He wonders what has happened to him as he is upset with her but still cannot see her tears.

Lakshmi is tensed that all the family members must be angry with her including Rishi but he says that it is not so. Virendra texts Lakshmi and asks her where she is and she tells Rishi that Virendra is calling her inside. Rishi asks her to wipe her tears before entering the house. Rishi feels he should not be bothered by Lakhmi’s tears but he is still getting affected by it. Neelam is waiting for Lakshmi to come. Lakshmi enters the house and Neelam shouts at her for taking such a huge step before consulting any one of them. She yells that her unplanned step has further destroyed Rishi’s image and he has fallen deep in the situation even more.

Rishi enters the house and tells everyone not to shout at Lakshmi but Karishma and Malishka try to provoke him. Virendra tries to calm everyone and says that whatever had to happen it happened and let us close the topic now. Lakshmi tries to explain to Virendra that she went to Shanaya to convince her and she agreed that she had done wrong and volunteered to take the case back by signing the papers.

Lakshmi says that she was not aware that Shanaya will call media people and play a double game on her. Karishma scolds her for becoming a heroine and asks her to watch daily soaps a little less as it only happens on TV, not in real life. Lakshmi tells her that Virendra sent her to the office to which he agrees. Karishma asks her if Virendra sent her to speak with Shanaya and Malishka shouts at her and says that such matters need to be handled sensibly and because of her overconfident step people are believing that Rishi might have really molested her. Dadi also says to Lakshmi that as she is nice she cannot expect others to be nice too as this is a city and here the rules are different. Sonia also targets Lakshmi and says that she has broadened the mess for Rishi.

Rishi tells everyone to not blame Lakshmi as she was not aware that Shanaya will trick her. He says that we all will think later about what to do. Malishka says that Lakshmi is not a kid for committing a big blunder and Virendra asks her to stop. Karishma takes Malishka’s side and tells that though she doesn’t have the right to speak in this matter, she loves this family and all the members and therefore is concerned. Karishma continues to scold Lakshmi and says that her stupid step has proved Rishi as a molester even without going to court. Aayush tries to speak but Karishma doesn’t allow him.

Karishma says that she is so angry with Lakshmi but cannot say things because her brother and sister-in-law won’t like it but she can definitely say it in another way. Karishma holds Lakshmi’s arms tightly and says that if she had been her daughter-in-law she would have removed her out of the house. Aayush asks his mother to stop scolding Lakshmi and listen to him for a few minutes. He says that Lakshmi took the right step and he cannot see her getting targeted by all. Rano troubles Shalu and Bani with taunts about Lakshmi’s behavior. Bani starts crying and Shalu pacifies her. She assures Bani that Rishi and Aayush are there with Lakshmi to take care of her. Karishma scolds Aayush for behaving weirdly with her but he asks for 2 minutes from her to speak.

Karishma allows him. Aayush says that he was the one who gave Lakshmi the legal papers and she had informed him about it. He says that both of them were in doubt that Shanaya might trick them but Lakshmi took the bold step just for Rishi. Aayush says everyone is only blaming her but nobody tried to do anything for Rishi and it was only Lakshmi who tried. She was the only one who stood bravely in front of the media and answered them and she did all of this only because she could feel Rishi’s pain. Aayush says that Lakshmi convinced Rishi to go to the office and became his strength. He says that he also could not do anything despite being in the same office as Rishi.

Aayush tells that Lakshmi gathered courage and went to Shanaya and tried to make her understand and that is why he will always support Lakshmi in protecting Rishi. Aayush says that Lakshmi proved that she is Rishi’s wife in a real sense. He tells everyone to thank Lakshmi and not blame her. Aayush apologizes to Neelam, Dadi and Karishma if he misbehaved with them but says he cannot feel sorry for what he just said. Karishma tells Aayush that when he feels sorry for his thought process and realizes how big the mess is, only that time she will accept his apology. Malishka goes near Rishi and tries to explain to him that Aayush is his brother and spoke extra and tries to cool him. Rishi goes to Lakshmi and thanks her for thinking about him and taking a big step for him. Malishka fumes in anger. Keep reading.

Reviewed Rating for Bhagya Lakshmi 6th October 2021 Written Update Huge drama: 5/5 This rating is solely based on the opinion of the writer. You may post your own take on the show in the comment section below.