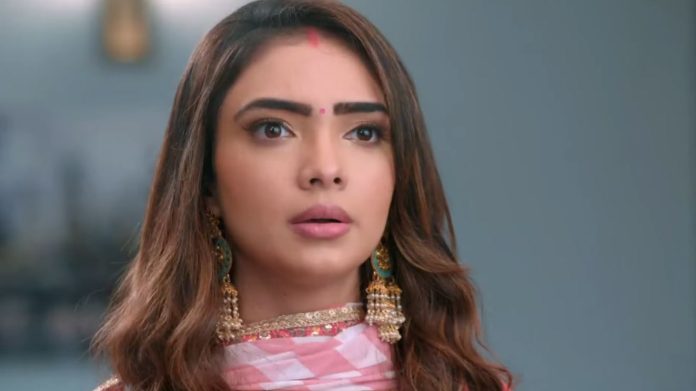 Kumkum Bhagya 7th October 2021 Written Update Dida exposes Rhea Prachi and Dida try to find out who has spilled the oil on the floor. Dida suspects Rhea, who would definitely not want to take along Prachi. Rhea sheds tears and tells a fake story to Pallavi. She tells Pallavi that Prachi is still against her, she still suspects her that she/Rhea is after Ranbir. Dida asks Pallavi not to believe Rhea. She tells that if Prachi has any suspicion on Rhea, then she would have not asked Ranbir to go along with Rhea. Pallavi tells Dida that Prachi is manipulating her.

Dida tries to open Pallavi’s eyes. She adds that its not Prachi, but Rhea, who is wrong and manipulating them. She tells them the truth that Rhea is fooling the entire family. Pallavi asks her what does she mean. Rhea gets worried thinking Dida will speak out her truth. Meanwhile, Aaliya and Tanu try to make a plan against Pragya, who is troubling them a lot.

Pragya thinks once they get busy in the household chores, their minds will not play dirty games. Aaliya is still the same. She tells Tanu that if the tree is very big for them to cut down, then they shall cut its roots, then the tree will dry out and fall down. She asks Tanu to let Pragya play the games, because she will be playing the last shot to win. Tanu believes Aaliya, knowing her cunning mind. What will Aaliya plan against Pragya?

Ranbir asks Prachi not to joke that she is coming with him. Prachi tells that she isn’t joking. He asks her if her ticket is booked. She says ticket and packing, everything is done. He thanks her for the big surprise. He asks her how much happiness will she give him at once. He is really happy and loves her surprise. He tells that she won’t miss him and he won’t miss her now. They have a lovely hug. Baljeet tells Pragya that she has written about Pragya’s victories.

She is glad that Pragya has stopped Abhi from drinking. Sushma tells that its indeed a big thing that Pragya has stopped him from drinking for one night, he will slowly get rid of his addiction. Baljeet tells that Pragya has handled Aaliya and Tanu well. Pragya tells that she had to teach them a lesson. Baljeet tells about the duties Aaliya, Tanu and Mitali used to do in the chawl house. She adds that she also did the household chores to maintain the family peace. She didn’t wish more clashes in the family. She complains to Pragya about them. Tanu overhears Baljeet’s words against them.

Tanu tells her that Pragya didn’t give any household work to Baljeet. Aaliya tells that its not Pragya’s values to make any elder work. Tanu asks her if she is praising Pragya. Aaliya tells that she is telling the facts. Tanu tells that Baljeet was mentioning Pragyas victories. Aaliya finds Tanu panicking. She shares the plans to calm down Tanu and make her feel better. She tells that Pragya’s victories aren’t anything big, she is going so because they are allowing her.

Moreover, Baljeet and Sushma advice Pragya to calmly thing of a way to reform Abhi. Pragya tells that Abhi started drinking in her memory, because of his pain, but he isn’t quitting drinking when they are together now. Baljeet tells that he got addicted now. Sushma tells that maybe Abhi wants to trouble her by his drinking habit. Pragya understands them. Sushma tells that Abhi has got drunk even last night. She asks Pragya not to risk herself by going out at night. Sushma scolds Pragya as a mother.

Baljeet is sure that Pragya will change Abhi, she will make him away from alcohol. Pragya gets a brilliant idea to get music in Abhi’s life, because he loves music more than alcohol. They love the idea. Pallavi tells Ranbir that Prachi didn’t clean the oily floor just to make Rhea fall down, so that Rhea doesn’t go out with him. Prachi tells Pallavi that she is misunderstanding her. Pallavi trusts Rhea. She tells that Prachi doesn’t trust Rhea, and suspects her about Ranbir. Prachi tells that she trusts Rhea. Pallavi adds that Prachi doesn’t trust her marriage, she is insecure of Rhea.

Ranbir tells that its a wrong accusation, Prachi told him that Rhea has changed, Prachi isn’t against Rhea. Pallavi tells that Prachi wants to stay in everyone’s good books. Dida asks Rhea not to drag the matter. Pallavi tells that Prachi just tries to act innocent, but she always does wrong with the family. Shaina asks Prachi to stop scheming against Rhea. Prachi asks Shaina not to talk between the family. She gives a good reply to Shaina, who provokes Pallavi. Prachi clarifies that she has forgotten her past, she asked Ranbir to take Rhea to Bangalore.

Reviewed Rating for Kumkum Bhagya 7th October 2021 Written Update Dida exposes Rhea: 4/5 This rating is solely based on the opinion of the writer. You may post your own take on the show in the comment section below.