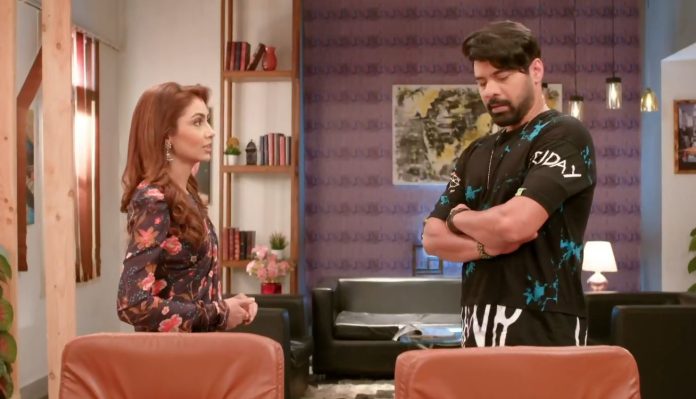 Kumkum Bhagya 8th October 2021 Written Update Abhi’s makeover Prachi asks Ranbir to never call her a bad sister. She tells that Pallavi has a right to scold her on her mistakes, but not regard her a wrong person. Ranbir defends Prachi in front of Pallavi and Rhea, who accuse Prachi for no reasons. He knows Prachi is good-hearted. Rhea doesn’t realize that she is falling in Ranbir’s eyes, because of her move. Ranbir and Prachi get alert of Rhea after she openly accuses Prachi. Rhea has no option than to plead innocent. On the other hand, Pragya and Abhi have a mature talk after a long time. Pragya gives him a makeover, to boost his self-confidence back. She wants him to quit drinking and live a good life.

Abhi thanks her, and she also thanks him. He further apologizes to her, saying that she didn’t react knowing the fact that his sister Aaliya is going to join Pragya’s business rivals. He tells that Aaliya is working with Gaurav Thapar.

She tells that she doesn’t care if Aaliya is working with Gaurav, as long as Abhi is with her. She adds that its not important to know how many people are against you, but that to know how many people are supporting you. She thanks Abhi for supporting her, which means a lot to him. Pragya aims to bring him back to the music world and plan his amazing re-launch as a singer. She thanks Abhi for the trust he showed on her. Keep reading.

Rhea asks Dida what wrong did she do with Prachi. Pallavi tells Dida that if Rhea plotted anything, then she would have made Prachi fall down, she would have not hurt herself. She defends Rhea. Prachi tolerates all the blames at first. She tells that she can’t imagine hurting her own sister. She doesn’t want to become bad in front of Rhea. She tells that she completely trusts Rhea, who has really changed. Pallavi asks Prachi why is she answering her. Prachi clarifies that she didn’t do anything wrong.

She accepts her mistake that she didn’t clean the oily floor well. She tells that she should have cleaned it well and saved Rhea from the fall. Ranbir also defends Prachi, who can never imagine her sister getting hurt. Prachi tells that she can never be a bad sister for Rhea. Pallavi tells that Prachi can be a bad sister-in-law. She adds that she knows Prachi’s intentions well, she can judge people and know if she can trust someone. She asks Ranbir not to defend his wife.

She tells that Prachi has done wrong with Rhea, he shouldn’t take his wife’s side. She asks Prachi to do something nice if she wants to win their hearts. She lectures Prachi on becoming a good person. Prachi tells Rhea that she can never wish bad about her. Shaina asks Rhea to take rest before her trip. Rhea isn’t able to stand on her feet. Pallavi asks Ranbir to call the doctor urgently, Rhea is in pain. She takes Rhea to her room. Prachi is left in tears. Dida encourages Prachi for raising her voice. She is glad that Prachi didn’t tolerate the wrong, she has the courage to call wrong as wrong.

She blesses them to be happy together. Rhea tells Shaina that Pallavi won’t let Prachi go to Bangalore now. Shaina asks her if she can go. Rhea tells that she is in pain, Ranbir will be with her and take care of her. Prachi asks Rhea to have the soup. She asks Rhea to believe her, she doesn’t want to harm her. Doctor meets Rhea to examine her ankle sprain. She tells that it can be muscle tear. She suggests that Rhea needs complete bed rest. Rhea worries that she can’t travel now. She tells that she has to go to Bangalore. Pallavi asks her to cancel the trip. Pallavi informs Siddharth that Rhea isn’t coming to Bangalore. Siddharth asks her what happened. Ranbir asks Siddharth not to ask the long chapter.

Siddharth informs that he is coming home, he isn’t going to Mumbai since the meeting got cancelled. Pallavi asks Rhea to call her friend and inform that she isn’t coming. Ranbir tells that even Prachi and he won’t go, they will cancel their tickets. Pallavi asks them to go to Bangalore, not to spend quality time together, but to avoid seeing Prachi’s face in the house. She feels angered seeing Prachi. Ranbir asks Pallavi not to start it again. Pallavi accuses Prachi for doing bad with Rhea. Rhea gets worried that Pallavi is ruining her plans. She asks Pallavi not to send Prachi, she can’t handle everything alone. She adds that Shaina will stay with her and help her. Prachi refuses to go anywhere.

She apologizes to Pallavi. She tells that Rhea is important to her, she loves Rhea and wants to stay back to take care of her. Pallavi asks Rhea if she trusts Prachi. Rhea shows trust on Prachi to stop her back. Pallavi asks Prachi to look after her sister. Prachi gets ahead to fulfill her responsibilities. Ranbir thanks Rhea for taking Prachi’s side. Shaina pities Rhea for falling in her own plan. Rhea asks her to leave and stay in the guest room.

Baljeet asks Abhi to do something and make her proud. Sushma praises Pragya’s best qualities. She tells Abhi that she has seen Pragya hitting the bull’s eye. Abhi tells that its so simple. Pragya makes fun of him. Baljeet tells that Abhi plays really well. Pragya calls it impossible. Abhi tells that they will see who is the champion. She asks him to lose to her. He asks her what will she do if he wins. She agrees to do anything for him. He asks her to do anything he tells. She agrees to become his slave for a day. He finds her over-confident. Pragya challenges him. They get ready for the competition. Pragya’s plan to distract him and make him away from alcohol seems to be working. Keep reading.

Reviewed Rating for Kumkum Bhagya 8th October 2021 Written Update Abhi’s makeover: 5/5 This rating is solely based on the opinion of the writer. You may post your own take on the show in the comment section below.