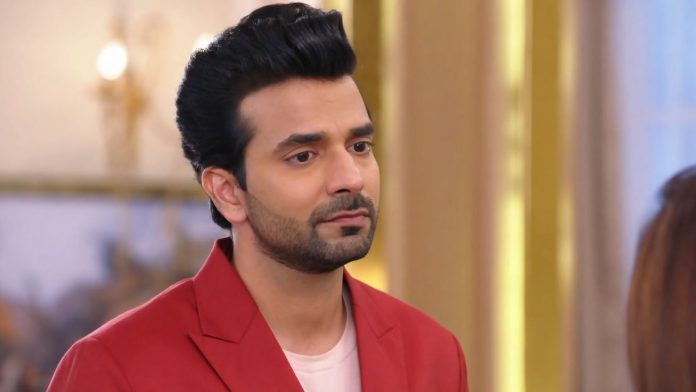 Kundali Bhagya 8th October 2021 Written Update Choked Rishabh Rishabh gets doubtful about Sherlyn, because of the fact that he always trusts Preeta. He knows Preeta isn’t someone to accuse someone on baseless reasons, when the accusation is so serious. He decides to find out Sherlyn’s truth himself. Even he suspected Sherlyn before, when Sherlyn and Prithvi got locked in the room once. He had been sympathetic towards Sherlyn ever since she lost her unborn child. Rishabh goes to Prithvi’s room.

He finds Prithvi’s clothes kept on the bed. He stops when something sparkling reflects in his eyes. He checks the coat’s pocket and finds Sherlyn’s earring. He feels choked by the shocking truth, realizing that Preeta was so right. Rishabh takes the earring and goes to Sherlyn. He gives her the earring and asks her to just guess where did he find it. He tells that she won’t believe it when he tells her where he found it. She tells that maybe he had found it in the kitchen, or someone else. He replies angrily that he got the earring in Prithvi’s coat pocket. He tells that she won’t have anything to tell now.

She is stunned by his shocking find. She faces Rishabh’s wrath. He doesn’t let her speak. He tells her that he is done with her, and their relationship, it’s all over between them, their marriage is now over. He declares that they will get divorced, not due to lack of love and faith, but because of her cheating. He can’t forgive Sherlyn for her cheating. He goes to apologize to Preeta for not standing by her when she was trying to open his eyes and show him the truth. Preeta tells him that she wanted to tell him the truth much time before, but she was just giving them a chance to change.

She didn’t know that Prithvi and Sherlyn would break the promise to Bappa and still continue their extra-marital affair. She knows Rishabh is too hurt. Seeing his tears, Preeta also cries a lot. She feels sorry that his heart broke so badly. Rishabh tells that it’s actually better that his heart is broken than living in a false world. He decides to cope up from Sherlyn’s cheating, but doesn’t know how he will tell this shocking truth to Kritika, to save him from a cunning man like Prithvi. What will Karan, Preeta and Rishabh do to oust Prithvi and Sherlyn from the house? Keep reading for the biggest twist of the show, hoping that this scene isn’t anyone’s imagination.

Shrishti meets Preeta. She congratulates her for exposing Prithvi and Sherlyn. Preeta tells that she couldn’t prove anything, she lost the video, Prithvi deleted the video from the phone. Shrishti tells that Rishabh trusts her a lot, he has always supported her since the day she came in the Luthra house for the first time. She feels Rishabh will believe her. Preeta tells that Rishabh will believe his wife, they will have belief in their relation. Shrishti asks her not to lose courage. Preeta tells that she will not spare the evil duo, she will not let them cheat the innocent family.

Shrishti salutes her spirit. She asks Preeta to become confident and bold again. Preeta asks her to get a recording device, which will store the recording permanently, no one shouldn’t delete it. Shrishti tells that she will talk to her friends and find such a technology for her. Preeta tells that she wants to end Prithvi and Sherlyn’s chapter soon. Shrishti hugs her before making a leave. Karan arrives home and asks Preeta about Rishabh. Preeta tells that Rishabh is at home. Karan finds her tensed and gives her a hug. He asks her the matter. He tells that he felt she needs a hug. She tells that she really needed it, its her good fate that she got him.

She is thankful to get a good family and a good partner. She ignores a call from an unknown number. Kritika returns from shopping. She asks Preeta is she fine, why was she sounding tensed on the phone call. Preeta tells that she is okay. Bani wants to see what Kritika has shopped. Kritika asks Preeta to check her gifts. Preeta finds Kritika happy. She pities Kritika who doesn’t know what’s going on behind her back. Rishabh enters Kritika’s room to hide the surprise gifts for her birthday. He puts the gifts in the cupboard. He wants Kritika to celebrate her birthday well.

He feels that times may change, Kritika’s heart may break knowing Prithvi’s truth. He sees Prithvi’s coat. He finds Sherlyn’s earring in the pocket. He recalls Sherlyn losing her earring. He feels ashamed of Sherlyn. Prithvi asks Rishabh why did he come to the room to blame him again. Rishabh loses his cool on realizing Prithvi’s lies. He catches his collar in anger. He spares him hearing Kritika coming. Kritika tells Rishabh that she loves old songs for its purity, she doesn’t want any new songs, he should make it clear to the DJ.

Rishabh tells that it will be as she wants. He gets tears in his eyes and hugs her. He makes a leave. Kritika finds Rishabh stressed. Prithvi tells that he is in bigger stress. She asks why is he smiling. She asks if he is jealous of Rishabh, because she loves him more. Prithvi doesn’t care whom she loves. She finds him cute. Bani finds it strange that Rishabh see her in the corridor, maybe he is in tension. Kritika is sure that Rishabh won’t be in any trouble. Prithvi wonders why was Rishabh angry, when he already cleared that there is nothing between Sherlyn and him.

He asks her if he needs to tell her anything else now. She gets speechless and cries. He counts her lies. He asks her how did she learn lying so much. He calls their marriage over. He tells her that this time, he won’t forgive her, he will tell the family that he can’t stay with her, he can’t tolerate her in his room and his house. He doesn’t want to see her again. Sherlyn is left shocked. He asks her to go to her mom’s place. He asks her to just shut up.

He tells her that he never expected this from her, once he tells his family about her, they won’t ask him anything, because he is the proof himself, he doesn’t need any proof. Preeta meets Rishabh. He tells that he trusts her a lot, he blindly believes her, he knew she was saying right, but he couldn’t say anything that time. He apologizes. She asks him if Sherlyn has accepted the mistake. He tells that she didn’t accept, she broke his trust, she tried to ruin their relations by her cheating. He is worried for his sister Kritika. He thanks Preeta for showing him the truth.

He tells that he would have not believed it if anyone else told this to him. He asks her the reason why she didn’t tell him before. He tells that Prithvi and Sherlyn should be thrown out of the house, they can never change. He asks her not to tell anything to Karan. He wants to tell the family himself and explain them everything. He tells that he didn’t intend to shout on her. Preeta feels sorry for his heartbreak. He tells that its actually good, such storms are necessary in life, it cleans up disgusting people from their life. He feels he can never trust anyone now. He promises that he will do his best for the business and family, Karan is handling the event alone just because of him.

She tells that Karan has come home some time back. Rishabh sheds tears. Karan meets him. He asks Rishabh why did he cheat him and not come to the event. Rishabh tells that many people cheat them, they get to realize it later. He hugs Karan and asks him to stay with him. Karan doesn’t understand his emotions. Rishabh tells that he will go to handle the night-long event. He asks Karan to take rest. Karan asks Preeta why was Rishabh so worried. She stays silent. He decides to ask himself. He asks for Pihu. Preeta tells that Mahesh is taking care of Pihu. She didn’t know that Rishabh will be so troubled by the truth. Its the best episode in recent times. Keep reading.

Reviewed Rating for Kundali Bhagya 8th October 2021 Written Update Choked Rishabh: 5/5 This rating is solely based on the opinion of the writer. You may post your own take on the show in the comment section below.