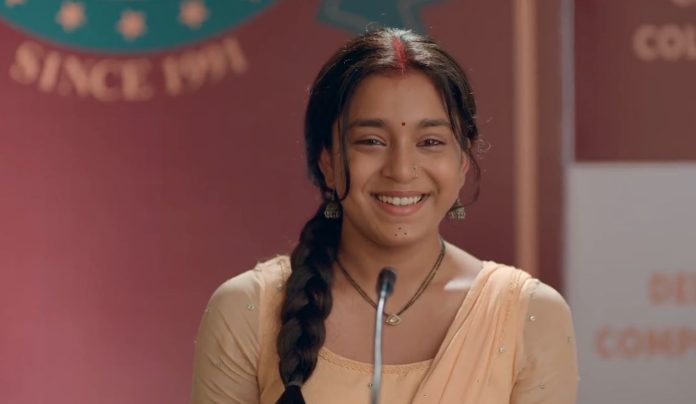 Imlie 11th October 2021 Written Update Imlie requests Malini Aditya feels angry reading the non-important headline in his company’s newspaper’s first page. He thinks that he wasted his time in the past by working hard on bringing original and important issues news for his company’s newspaper. Imlie over hear him. He thinks about what he will teach Imlie in the journalism internship, when his newspaper has become a gossip column. Rupi scares Imlie by interrupting her from listening to Aditya’s thoughts. She discusses with Imlie, how she and Aditya feel lonely and sad without each other.

Rupi advises Imlie to go Aditya as a Parlor employee instead as his wife. She successfully sends Imlie to Aditya. Imlie keeps milk in Aparna’s room. She tells Aparna that Aditya wants her to intern in his company Bhaskar Times. Imlie requests Aparna to take care of Malini and her medicines in her absence. Malini overhears them and thinks to stop Imlie from working with Aditya.

Next morning, Imlie talks to Meethi that she is trying to improve her and Aditya’s relationship. She hopes Malini to at least love and take care of her own child. Imlie also tells Meethi that she is filling a form to intern with Aditya. Meethi gets happy and blesses Imlie to always be happy. Anu gets angry overhearing Meethi and Imlie’s conversation. Imlie says to Meethi that she will buy clothes for her with her earnings. Meethi acts like Anu and makes fun of her. This makes Anu angrier.

College students discuss that Imlie is interested in joining Bhaskar Times only because her husband Aditya works there. Imlie says she wants to join Bhaskar Times because she is interested in Journalism. Malini overhear this and gets angry hearing this. She hides the remaining forms in her bag to not let Imlie get a form for internship. Imlie tells Malini that she saw her hiding remaining forms in her bag. She also asks Malini to let personal/family matters come in between their professional life.

Malini starts shouting loudly and pretends to act innocent. She tells everyone that Imlie is accusing her of hiding internship forms. Imlie tries to prove her innocence by telling everyone that Malini hid remaining internship forms in her bag. Malini asks everyone to check. Teachers insult Imlie by saying that, first Imlie filed a false case on Malini and now accusing her by lying. Teacher asks Imlie to do an internship in the next batch. Malini informs Imlie that the next batch for internship will start after six months. She wishes good luck to everyone and tells Imlie that she may not be able to do an internship the whole year.

Malini and Imlie leaves. At Chaturvedi house, Anu tries to insult Meethi by asking to walk in heels if she wants to be like her. Meethi says she can walk without slippers too. Anu stops her and asks her to either accept that she and Imlie cannot become like her and Malini or walk in heels. She challenges that she and Imlie cannot defeat her and Malini. Meethi wears the heels and tries walking in it. Anu tries insulting Meethi more but Meethi gives her the befitting reply. Imlie recalls Malini’s words.

Imlie gets to know how Photo-copy machine works. In Aditya’s office, Aditya tries setting up a new intern’s table. His boss asks if Imlie will be coming as the new intern. He wishes that Imlie soon comes to his office as an intern. On the other side, Imlie tries getting a blank internship form from students but fails. At Chaturvedi house, Anu makes Meethi do the household/servant work in heels. Imlie on the other hand, tries to search Internship forms in Malini’s bag in the staffroom. Malini catches Imlie red-handed searching her bag.

In the next episode, Imlie will tell Malini that she has found a way to fulfill her dreams. She will bring some papers/forms and ask Malini to tear them as well. Imlie will try explaining to Malini the importance of papers by telling her that papers are made by cutting trees, which are important for a person’s life. She will also try to explain to Malini the importance of teacher and students’ relationship, by telling her that a teacher should make a student’s future bright instead of ruining it. At last, she will ask Malini to decide what she wants to do.

Reviewed Rating for Imlie 11th October 2021 Written Update Imlie requests Malini: 3/5 This rating is solely based on the opinion of the writer. You may post your own take on the show in the comment section below.