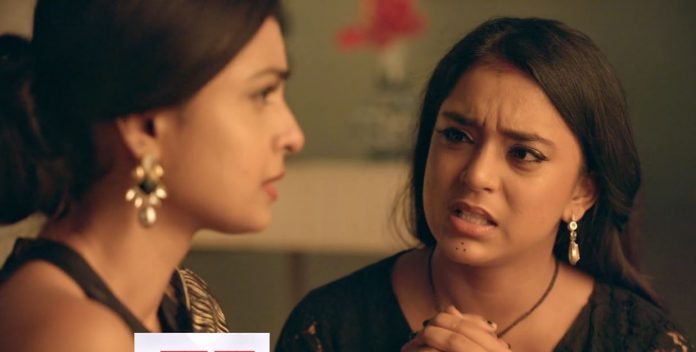 Imlie goes with a man to check the 9th idol in the truck. Malini deeps breath in fear. The man checks the truck and says the 9th idol is not there. He shows Imlie the picture of nine idols they delivered with her at her house. Imlie wonders where the 9th idol of Devi maa went. The man/driver says someone may have stolen an idol when everyone was busy dancing. He asks who idiot gave her this responsibility. He leaves saying now God will help her. Imlie finds mud and gets the idea to make Devi Maa’s idol. Committee members get angry at Tripathi for giving such a big responsibility to a young girl like Imlie.

Radha agrees to Committee members and asks Harish why he gave Imlie such a big responsibility. Aparna asks Rupi to go and bring Imlie. Committee members say that Imlie failed in her first work only. On the other side, Malini in her room thinks to hide the idol. She thinks if the idol will not be found Imlie will be blamed and will not be given any big responsibility. She prays Devi maa to help her. She tells Devi Maa that she knows she is doing the wrong thing but only to get her husband back. Aparna asks Malini to open the door. Malini gets scared with Aparna’s knocking.

Pankaj says they will get the new idol. Nishant tells Aditya that there is no idol left to be purchased. Committee members get angry and say they will have to bear double expenses if they will buy a new idol. Aditya says he will bear the expense. Committee members ask if the new idol won’t look the same like the others? They get angry and say they cannot have confidence on Imlie for further works of Navratri Pooja after she committed mistake in her first work/responsibility. They say that Imlie did another big mistake by getting missing after the Idol got missing. Nani asks Sundar to bring cold drinks and snacks for committee members. Committee members say they came for worshiping Devi maa not for snacks. They ask what will they answer other colony members who will arrive to worship Devi maa.

Rupi says they will manage something. Aditya thinks to direct Committee members attention somewhere else till Imlie manages the situation. Aparna worries why Malini is not opening the door. She enters Malini’s room and asks her if she is okay. Malini takes Aparna out of her room. Imlie is seen making the idol same as the other eight idols of Devi Maa. Aditya asks Committee members for an interview to divert their attention. Other members of Tripathi family convince Committee members for the interview, understanding Aditya’s plan of diverting their attention.

Imlie finishes making the Devi Maa’s idol. The driver by mistake ruins the spot made by him on the ninth idol. Imlie gets another idea and goes home. She finds Rupi crying and gets to know that Rupi is recalling her past Navratri with her husband. Rupi asks Imlie why she is not able to move on from her husband. She further tells Imlie, that she is not able to hate or forget her husband, who forgot her. Imlie tries giving strength to Rupi. Rupi feels relaxed and says to Imlie that she is her soul sister. Imlie asks Rupi for her blow-dryer.

Aditya tries to find Imlie. He sees Imlie blow drying her hair and looks lovingly at her. He asks Imlie if she found Devi maa’s 9th Idol as Committee members are waiting for her. Nishant interrupts him and Imlie leaves. Imlie tries drying Devi Maa’s idol using a blow-dryer. Truck driver praises Imlie’s hard work and asks why she tolerates everyone’s scolding. Imlie says she in the past broke her family’s trust and now doesn’t want to repeat her mistake. Aditya leaves for the market to find Devi Maa’s idol matching the other eight present at his home to help Imlie. In the next episode, Imlie will catch Malini giving the lost Ninth Idol of Devi Maa to poor people along with some money. Malini will see Imlie there too.

Reviewed Rating for Imlie 14th October 2021 Written Update Malini’s crime: 3/5 This rating is solely based on the opinion of the writer. You may post your own take on the show in the comment section below.