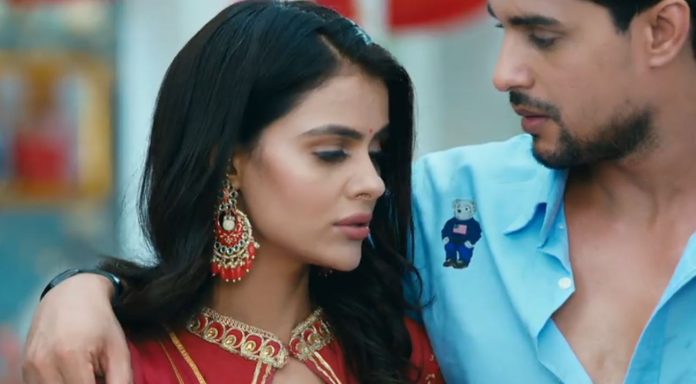 Udaariyaan 14th October 2021 Written Update Fateh big move The entire family prays for Tejo at home with a hope that Mata Rani will not disappoint them by keeping the house Laxmi away on the eve of Navratri. They want Tejo to return home and perform the Kanjak puja. Khushbeer regrets a lot that Tejo was ousted from the academy because of Jasmin, even then she is being targeted and troubled for the academy matters. He gets angry on Jasmin for her irresponsible behavior. Tejo misses the family. She thinks of their sorrow. Surprisingly, Tejo is released. Constable asks her to come out of the lockup, all the charges on her got dropped.

She asks the constable if the investors have taken the complaint back. Constable tells that someone else took the blame on himself. Fateh surrenders to the police by taking the blaming on himself to save Tejo. He gets arrested. Tejo is shocked to see Fateh handcuffed. Fateh makes a sacrifice to save Tejo. Jasmin’s plan backfires badly.

She loses Fateh while attempting to get rid of Tejo. Tejo will now find out the reason behind the investors’ complaint, and reach to Jasmin. She will sort the matter as Fateh promised the family just to save Fateh from the mess. Tejo will once again prove herself the best by saving Fateh.

Jasmin doesn’t think Tejo can get any help from them. Jasmin will learn that Fateh has got himself arrested just to save Tejo. Will Jasmin make a mistake in desperation and get caught? When will Jasmin’s evil get exposed? Isn’t Tejo encouraging Jasmin to commit more crimes by hiding it from the family? Tejo should expose Jasmin’s evil and foil all her plans at once by exposing her real face to Fateh. Fateh will himself throw out evil Jasmin from his life, on knowing her reality. Jass’ entry is next after the arrest chapter winds up. Comment your views on the track. Keep reading.

Tejo is shocked to see Fateh arrested for the same blame of the fraud case. She knows that even he is innocent. He is paying a price for Jasmin’s evil plan. He knows that Tejo isn’t at fault, because she was removed from the academy long time back, Jasmin didn’t clear the payments so Tejo can’t be blamed. Fateh knows that Jasmin didn’t do any work and angered the investors. He feels guilty that he did wrong with Fateh. He wants Tejo to stay away from his problems. He tells Tejo that he is wrong, he is actually in guilt that he removed her from the academy when she was working the best and got Jasmin onboard.

He regrets that Jasmin proved his decision wrong. Tejo asks him not to get his name in the case, which will ruin the family name further. He tells her that she is still his wife, his family’s Bahu, even her arrest news will get the same defamation for them. He justifies that his arrest is better than hers, he doesn’t want her to go to the jail for the fraud she didn’t commit. He asks her to go home and let him deal with the mess. He sends Tejo home with Abhiraj.

Tejo returns home, and shocks Jasmin. Abhiraj tells the family that Fateh has surrendered by taking the blame on himself. He had to take this step to get Tejo released, knowing she is totally innocent. He doesn’t want Tejo to get jailed for the academy fraud when she isn’t a part of it now. Jasmin loses her cool knowing Fateh has accepted the fraud blame. She didn’t wish this to happen. She gets mad at Abhiraj and Tejo. Abhiraj reminds her that Fateh is Tejo’s husband. Gurpreet and Simran cry for Fateh. They request Tejo to bring back Fateh home, because she is the best person to solve this academy mess.

Tejo tells them that she isn’t working for the academy, Jasmin is Fateh’s partner now. Gurpreet still begs her to help out Fateh. Khushbeer decides that Tejo will not come ahead to help Fateh, who is actually paying for his own mistakes. He is glad that Fateh will learn a lesson now for removing Tejo from the academy and involving Jasmin. He reminds Tejo that Fateh’s decision will ruin him, as he already told her. He wants Jasmin to sort out the mess if she can. Jasmin asks Tejo if she is taking revenge on Fateh, who had ousted her from the academy. She blames Tejo that the latter can’t see Fateh and her happy.

Jasmin’s taunts don’t affect Tejo. Tejo shows Jasmin her place once again. She asks Jasmin to step ahead and help out Fateh, because she was the one who wanted to become Fateh’s academy partner. She asks Jasmin to prove her love for Fateh now by proving him innocent. She provokes Jasmin to prove her love if she truly loves Fateh. She knows that Jasmin is selfish and will never help Fateh. Tejo and Jasmin get into a heated argument. Khushbeer supports Tejo. Tejo tells Jasmin that she didn’t send Fateh to the jail, and she will not help him now. She wants Jasmin to handle the mess, as she always boasts of her smartness and love. She proves that Jasmin was handling the academy since two months, and still ruined everything. She tells the family that she will not help Fateh. She apologizes and goes away. Jasmin doesn’t realize her mistake.

Jasmin rushes to meet Fateh and blames him for ruining everything, especially their future in Canada. She tells him that his mistake will cost them a lot. Fateh can’t believe that she is still being so selfish. He realizes how he disrespected Tejo and fell into this problem. He tells her that the academy can’t run without Tejo, she used to handle everything. Jasmin can’t hear him praising Tejo. She asks him why does he always save Tejo, as if he loves her. Fateh tells her that he has saved Tejo because she is innocent. He doesn’t tolerate Jasmin blaming Tejo for everything.

The family thinks how can they save Fateh from the huge mess. The lawyer suggests them to return the money to the investors and request them to take the complaint back. Khushbeer states that he doesn’t have a big amount to pay, he can just mortgage the house. Tejo doesn’t want him to give up the house, who is their pride. She tells him that she will fix a meeting with the investors and try her best to convince them by showing a profit margin ahead. She tells that she can convince them to withdraw the case. She asks Khushbeer to trust her and give her a day time.

Khushbeer trusts her that she can do anything. Tejo does the impossible possible by convincing the investors for the meeting. She promises the family that she will bring Fateh home. Jasmin fails to do anything for Fateh. She comes across Jass and his mum outside the police station. She thinks Jass can help her a lot if she employs him in a plan against Tejo. She follows Jass to reach his house. Jasmin’s mind still goes on the wrong path. She cares the least for Fateh, while Tejo struggles to convince the investors in the meeting. Fateh recalls Tejo’s words, and believes her even more. Tejo meets Fateh to share the condition laid by the investors for his freedom. What’s the condition and will Fateh agree to it? Keep reading.

Reviewed Rating for Udaariyaan 14th October 2021 Written Update Fateh big move: 3/5 This rating is solely based on the opinion of the writer. You may post your own take on the show in the comment section below.