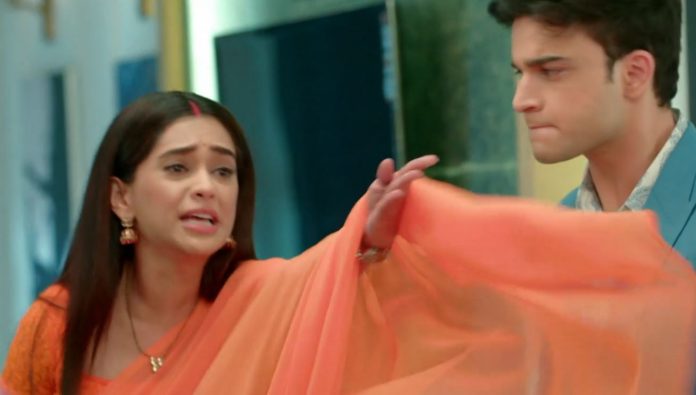 Kumkum Bhagya 18th October 2021 Written Update Prachi rages Rhea confuses Ranbir and Siddharth by her talks. She offers a drink to Ranbir. She waits for him to finish the spiked drink. Ranbir consumes the drink. Rhea hopes that her plan works. Ranbir feeds the food to Prachi stating that he has mixed his love in it. Rhea watches them. Siddharth wonders what is Rhea up to. Ranbir feels dizzy. He drops the food on Prachi’s clothes by mistake. He tells Siddharth that he will go and give the phone to Prachi. Rhea tells that she will give the phone to her sister. She asks Ranbir to carry on and finish the dinner. She finds Ranbir losing his senses.

She messages Aaliya to tell her that her plan is working. Ranbir gets intoxicated. He dances in the restaurant. Prachi and Siddharth get surprised. Prachi tells Rhea that Ranbir is drunk. She doesn’t like it. She gets upset with him. Rhea tells Siddharth that she will get Ranbir. She sends him to pacify Prachi. Rhea takes Ranbir to her room. She wants their distance to end. She feels Prachi and Siddharth can’t find her there. The power goes off. Rhea asks the manager about the power. Manager tells about the electricity issues.

He knows that she is Rajeshwari’s guests. He tells that he can shift her to some other room. She asks him not to stress. She gets a drink for herself. She goes back to the room. She hugs Ranbir. She tells him that he will be staying with her in the same room. She confesses that she loves him, and wants him. After the night passes, Rhea wakes up in the morning, feeling shy and awaiting Ranbir.

She calls Aaliya to inform her about the night with Ranbir. She adds that everything happened as she wanted. She tells that Ranbir has gone for a shower. Aaliya asks her to make Prachi away from Ranbir. Rhea tells that she will tell the night’s tale to Prachi and make her away. Aaliya tells that Ranbir will apologize and sort out the matter, Prachi will forgive her. She adds that she will create a big drama at Kohli house. She asks Rhea to come back home. Both the couples return home, and face Pallavi. Pallavi rebukes Rhea at the door. Prachi asks her what did Rhea do. Aaliya breaks the news of Rhea and Ranbir’s romantic night.

She hugs Prachi and tells that she is feeling sorry for her. Prachi feels restless. Dida asks her if Ranbir and Rhea didn’t tell her anything. Prachi tells that they both are behaving strange since the morning. Vikram asks Ranbir how can he do so wrong. Siddharth asks Ranbir to answer them. Aaliya tells that the truth will come out one day. She tells that she always accused Prachi for being wrong, but actually Prachi has been wronged, Prachi is the victim in the case. Prachi asks Aaliya to just say whatever has happened. Aaliya reveals about Ranbir and Rhea’s romantic night at the hotel. Prachi and Siddharth receive a grave shock.

Ranbir tells Prachi that its a lie. Aaliya tells Prachi that Ranbir and Rhea got intimate, Ranbir couldn’t forget his first love, Ranbir isn’t happy with Prachi in his marriage. Pallavi tells Ranbir that he has done an immoral act. Dida also rebukes Ranbir for his act. Pallavi asks Ranbir why did he marry Prachi if he had loved Rhea. Ranbir gets questioned by the entire family. Prachi defends Ranbir. She knows he can never cheat her. Aaliya tells Prachi that she has seen Ranbir and Rhea together on the video call, they were sleeping together. Ranbir apologizes to Prachi.

Siddharth questions Ranbir if he loved Rhea and wanted to marry her. Aaliya asks Siddharth if he isn’t aware of it. She clears his misunderstanding. She calls Rhea wrong. Ranbir stops Aaliya from saying wrong. Prachi asks Ranbir if he has fooled her since two years. Ranbir tells that he didn’t fool her. Prachi reprimands Ranbir for cheating her. She misunderstands Ranbir. She feels that she was wrong to trust him. Aaliya and Rhea get happy seeing their plan going perfectly. Prachi also scolds Rhea for crossing her limits, when she knew that Ranbir is her sister’s husband. She feels cheated by Rhea. Rhea replies that she did the same thing to take revenge on Prachi. Rhea’s statement shocks the family. Is this happening for real? Comment your views and keep reading.

Reviewed Rating for Kumkum Bhagya 18th October 2021 Written Update Prachi rages: 3/5 This rating is solely based on the opinion of the writer. You may post your own take on the show in the comment section below.