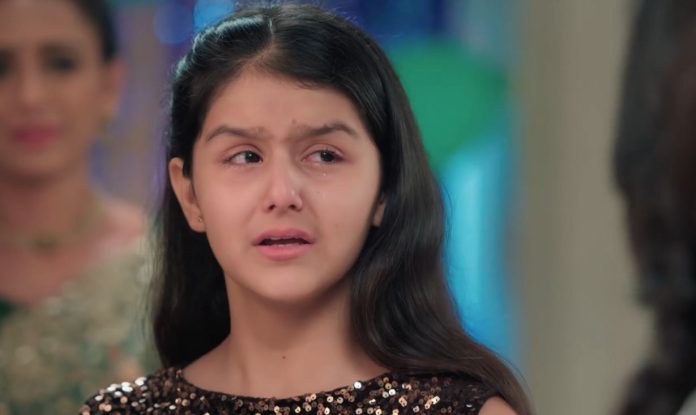 Yeh Rishta 19th October 2021 Written Update News for Akshu Akshu is shocked to know that she is Sirat’s step-daughter and Arohi is her real daughter. Sirat scolds Sheela for differentiating between her daughters and warns her to stay away from them. Akshu cries on knowing the truth. Arohi asks her what is wrong but she does not say anything and goes away. Akshu looks at her family photo and is confused about being Sirat’s step daughter as she does not find any person extra in it. She feels if the pictures are the same, how is Sirat her stepmother? Sirat is Boxing and suddenly sees Naira’s picture. She decides to tell Akshu about the truth after the party. Heartbroken Akshu tries to find out the truth herself and goes to ask Dadi and Suwarna but they say they will speak to her later as they are very busy right now.

Sirat plans to gift outfits to Akshu and Arohi. Kartik calls Sirat and she goes out to attend his call. Akshu is suffering from inside and thinks that why is she doubting her and Sirat’s relationship and she cannot be her stepdaughter. Arohi again asks Akshu what is wrong and she reveals what she heard on the phone. Arohi says that it is impossible and their mother is the same and not different.

Arohi asks her about the lady who spoke about this and Akshu says that she is not aware who she is and Sirat scolds her for saying this. Arohi tries to calm down Akshu and tells that she must have misunderstood her words but Akshu is sure that she heard it pretty clearly. Arohi is shocked too and starts thinking about the possibility. Suwarna is searching for Arohi and Akshu and finds them in Kairav’s room. Arohi says that they were missing Kairav a lot. Suwarna reminds Akshu that she has to give a surprise and tells them to get ready and come down.

She sees Akshu upset and asks her about it but Akshu says that she is only nervous. Suwarna asks them to get ready fast and come down. Akshu does not want Sirat to get upset on mother’s day and spoil her mood so she decides to wait till the next day to find out the truth. The ladies are clueless as they are blindfolded and are eager to know what is happening. The blindfolds are removed and the ladies are left in for a sweet surprise. Akshu and Arohi wish a happy mother’s day and everyone smiles.

Manish praises Dadi for showering love as a mother and showing a correct path like a father. Manish and Akhilesh dedicate a speech to their mother which leaves her teary-eyed. Dadi hugs both of them tightly. Akhilesh and Manish place a crown on Dadi’s head and clap for her. She thanks them for this lovely gesture. Arohi places the crown on the heads of all the mothers and Akshu says that they all are the world’s best mothers. Gayu receives a card from Vansh wishing her for mother’s day. Arohi informs Sirat that Kairav has sent a card for her too. Akshu gives a card sent by Luv and Kush for Surekha. Arohi gives a card sent by Kartik for Suwarna. Manish praises Akshu for her idea and credits her for all the planning and says that they just supported her.

Sirat is tensed that today she is going to reveal the truth to Akshu. Akhilesh reveals that it was Arohi who made the cake and Sirat hugs Akshu and Arohi. Sirat expresses that she is not aware if she is the world’s best mother or not but she can surely say that she is the luckiest one. Dadi insists Sirat cut the cake. Everybody makes a wish before the cake is cut. Arohi makes a wish to top the class. Sirat prays that Akshu and Arohi’s love grows stronger and they never think that they are stepsisters. Arohi reveals that there is another surprise for her and she will tell it first. Sirat says that Akshu will go first as she is the elder one. Sirat says that she will guess what the surprise is and says that Akshu is going to sing a song for her.

Akshu smiles and says yes. Sirat says that she knows her daughters very well. Akshu controls herself and remembers that she had decided to not spoil Sirat’s day. Everyone sits to listen to Akshu’s song. Akshu sings but suddenly remembers that she is Sirat’s stepdaughter and starts crying. Sirat feels that Akshu might be missing Kairav and Kartik while Surekha thinks that she might have forgotten the lyrics. Sirat asks Akshu to sing again and Manish praises her for learning to play guitar and making him proud. Sirat expresses to Akshu that she loves her and tries to understand why she is crying. Arohi reveals that Akshu came to know that she is Sirat’s stepdaughter. The Goenkas are left shocked. Manish tells Akshu that it is not true and asks who told her about it.

Arohi says that Akshu heard Sirat speaking to some lady on a call. Manish tries to convince Akshu that she has been mistaken by some random lady. Manish is very angry with Sirat. Akshu requests Sirat to tell her the truth. Sirat starts crying and Akshu believes that the lady was telling the truth and runs away. Arohi asks Sirat if Akshu is not her real sister and her stepdaughter. Manish tells Sirat that he will regret one thing all his life that her family is very cheap though she is a very good human being. Akshu and Arohi listen to Manish telling that both the daughters will get the same upbringing but not the same blood. Arohi questions Manish on why he is speaking like this with Sirat. How will Manish react now? Will the love change between Akshu and Arohi? Keep reading.

Reviewed Rating for Yeh Rishta 19th October 2021 Written Update News for Akshara: 3/5 This rating is solely based on the opinion of the writer. You may post your own take on the show in the comment section below.