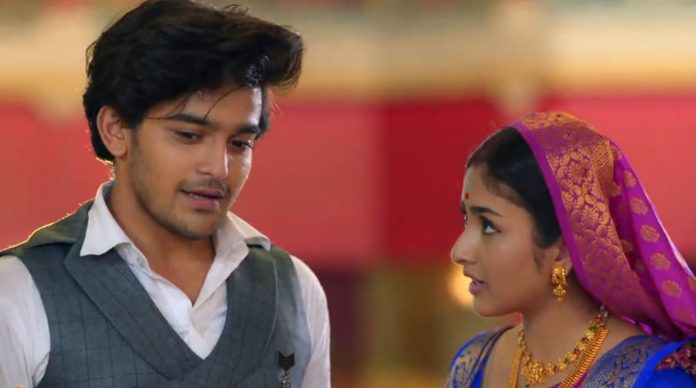 Barrister Babu 19th October 2021 Written Update Suspicious Bondita Bondita seeks Trilochan’s blessings. Trilochan blesses her on Batuk’s insistence. Trilochan doesn’t bless her to be married, but blesses to welcome a child. He gives the good news that she is pregnant. Bondita shares her happiness with Anirudh, who is actually Batuk. He feels Anirudh has lost his life because of Bondita. She tells that their relation has got complete, they had turn into friends first, then a couple and now parents. Batuk brings her home. Sampoorna welcomes them. The entire family think he is Anirudh.

Batuk asks Sampoorna to welcome Bondita because she is going to become a mother now. He tells that he can do anything for his son. He pleases Bondita for the sake of the coming baby. Bondita steps inside the house, while Batuk promises to make her out of the house soon. He pretends to get hurt, just to make Bondita come out of the house. Trilochan fails to understand his motives. Batuk tells her that he had got hurt, but he is okay now. He sends her inside, and then wipes her foot impressions. He wants revenge for Anirudh’s death.

He wants to get the heir of the Roy Choudhary family. He promises to throw out Bondita. Batuk gets emotional after meeting Somnath. He hugs Somnath. He makes excuses when Sampoorna questions him. She asks Batuk to take Bondita to the room. Trilochan wants the same. Batuk tries his best to pretend as Anirudh. He gets emotional seeing Anirudh’s picture in his room. He recalls the time when Anirudh called him in his marriage with Bondita, but Batuk refused to come to be a part of Bondita’s happiness.

Batuk apologizes for coming so late. He sheds tears for Anirudh. Bondita confronts him for the truth. She tells that she knows the truth that he isn’t calling Batuk back even on her saying. She adds that he doesn’t do anything for her. He gets angry that his brother gave his life for her, and even then she isn’t happy. He tells that Batuk won’t be coming, because she is the reason for it. Bondita grows worried. He tells that he was just kidding. She tells that she knows well that Batuk will come. She laughs on the childhood friendship with Batuk. She warns him to not crack such jokes again. Batuk apologizes to her.

He goes outside the room to stay away. He finds her stepping on a hair pin. He saves her and shows his obsessive care for his coming nephew. He tells Bondita that she won’t use any hair pin. He removes all the hair pin. She asks the reason for his strange behavior. He tells that he is stressed about the baby. He can’t tolerate if anything happens to the baby, he is thinking for the baby and her. He asks her to take rest. She reminds him the promise he made to her. He gets into a fix because he has no idea about Anirudh’s promise. Keep reading.

Trilochan gives a blessing to Bondita with a heavy heart and informs her that she is going to become a mother. Bondita is very happy and tells Anirudh that he has to tackle all her tantrums. Anirudh shows a fake gesture and says congratulations. Bondita tells Anirudh how they shared different kinds of relationships together by becoming a teacher and student first then great friends followed by husband and wife to complete it with becoming parents. Batuk who is disinterested in all her talks excuses himself by saying that he will go and help Trilochan and ask the doctor to see her. Bondita is ready to go home and makes an entry with Batuk in the house.

Batuk insists that Bondita enter the house by doing the ritual of Alta (a red dye applied to the hands and feet) and then come inside as she is going to be a mother and will be entering the house with a new life inside her. Bondita feels shy by Anirudh’s words and asks him not to talk like this in front of everybody. Batuk who is very happy to welcome his big brother’s child says that he will put extra effort into his kid and plots to throw Bondita out of the house as soon as possible. Batuk is lost in thoughts when he shouts out loudly and Bondita asks him if he is fine.

Batuk is very happy to see Bondita’s footprints going out of the house. Batuk thinks that today her footprints are going out of the house but as soon as he snatches Anirudh’s baby from her, he will no longer need Bondita and remove her from the house. Batuk meets all his family members for the first time after many years. He gets emotional seeing his younger brother Som. Sampurna is puzzled and asks Batuk why he is behaving so strangely as if he is meeting his brother after many years. Batuk gathers himself and lies that the past two days felt like many years had passed. Sampurna pulls Anirudh’s leg and says that he cannot stay still without Bondita.

Sampurna advises Anirudh to pamper Bondita and take special care of her as she is going to be a mother. She advises him to take Bondita to their room to rest. Batuk goes into the past and remembers his conversation with Anirudh when he had asked him to be a part of his marriage ceremony and Batuk had expressed that he was least interested in getting himself involved in Bondita’s happiness. Batuk also remembers the bad memories of his childhood with Bondita. Bondita finds Anirudh lost in thoughts and is angry with him that he is trying to avoid the topic and not doing what she wants. She tells Anirudh that he is not doing anything for his Bondita.

Batuk feels that Anirudh gave up his life for her and still Bondita feels that he has not done anything for her. Bondita insists Anirudh to call Batuk back from Italy if he misses him so much. Anirudh tries to explain to Bondita that Batuk hates her immensely and will not come back because of her. Bondita tells Anirudh that Batuk is his childhood buddy and they used to play and have lots of fun together. Anirudh asks sorry from Bondita and tells her he was joking and how did she believe him.

Bondita is sure that her childhood friend can never hate her. Bondita is not convinced and tells Anirudh that she does not feel he is sorry and Anirudh holds his ears and asks for forgiveness from Bondita. Batuk feels extremely uncomfortable entering Anirudh’s room with Bondita. Bondita is about to step on a pin and Batuk saves her in time. Bondita says that she will not get hurt with a small pin and Batuk says that he is doing all this for his child’s safety. Bondita asks Anirudh if he doesn’t care for her and he says that his child is more important and not her.

Bondita is shocked and Batuk handles the situation by telling her that he cares for her too. Batuk misses Anirudh and cries. He had assumed that taking the disguise of Anirudh was itself a difficult task but he had not thought that it would be extremely difficult. Bondita senses that Anirudh is tense and he says that he is only stressed about his kid as nothing should happen to him. Batuk insists Bondita take a rest and call him if she needs something and he will be around. Bondita doesn’t require this formality and says to Anirudh that he is forgetting something. Batuk is not aware of it and Bondita reminds him that he had promised to do something for her when she becomes pregnant. Batuk is trapped and thinks how will he know what Anirudh promised Bondita. How will Batuk handle the situation now? Will Bondita find out Batuk’s identity? Keep reading.

Reviewed Rating for Barrister Babu 19th October 2021 Written Update Suspicious Bondita: 3/5 This rating is solely based on the opinion of the writer. You may post your own take on the show in the comment section below.