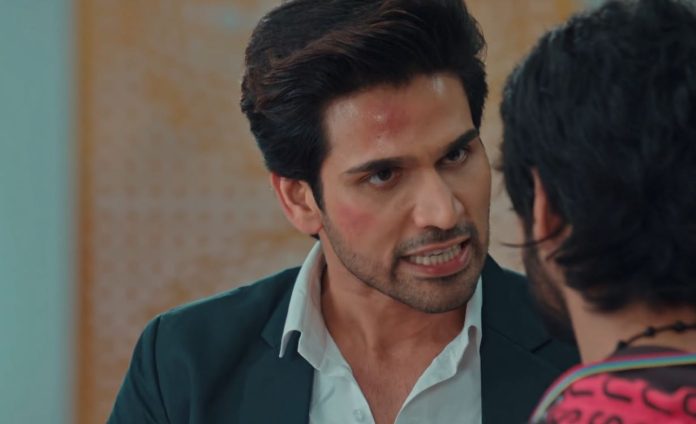 Yeh Hai Chahatein 21st October 2021 Written Update Armaan exposed Inspector Sachi Chautala shows Prisha that the whole night Armaan was on the terrace and for 10 minutes in the washroom. She says to Prisha that all proof shows that Armaan couldn’t have murdered Sanya. Rudra and Prisha get confused and tense. Inspector also proves that even Rudra didn’t murdered Sanya. She in different ways accuses Prisha as Sanya’s murderer. Rudra says Prisha is a doctor who saves people’s lives. He further says he knows Prisha cannot murder someone. Inspector says Prisha is human too and for love a human can cross any limits, can even murder someone.

She explains to Rudra that Prisha being a doctor has neatly cut Sanya’s throat and murdered her. Inspector says that only a doctor can know how and where to make a cut on the neck to kill someone. She says all the proofs are against Prisha and they have to consider her as the murderer. Before Rudra could say something, the inspector asked him to leave as his meeting time got over. Rudra asks Prisha to have faith in him as he will anyhow prove her innocence. He hugs Prisha and leaves.

Rudra returns and Armaan asks him if the police are ready to free Prisha. This angers Rudra more and he starts fighting with Armaan. Armaan gets angry and says he tolerates him only because of Prisha. Rudra warns him to not take Prisha’s name. He asks Armaan if he is behind Sanya’s murder. Armaan refuses Rudra’s accusations and says that he would have murdered him if he wanted. He accuses and doubts Rudra for Sanya’s murder. Rudra tells Armaan about timmings of Sanya’s murder as per forensic reports in his anger.

He says he will anyhow get Prisha free of prison and false accusation of Sanya’s murder. Rudra warns Armaan to stay away from Prisha. On the other hand, Saaransh and Anvi fail to switch on the TV. They ask Vasudha’s help to switch on the television. Sharda stops Vasudha from switching on the TV. She makes an excuse that there is some sparking in the wires. Vasudha understands the situation and sends the kids to their room. She asks Sharad what is she hiding? Sharda shows Vasudha the news of Prisha being accused of Sanya’s murder.

Sharda tells Vasudha everything Rudra told her about the situation. Vasudha gets tensed and thinks about going and helping Rudra and Prisha. Back in Shimla, Rudra is seen talking to the lawyer. Lawyer says the case is difficult because Prisha accepted the crime of murdering Sanya many times. Rudra calls Commissioner, but the latter doesn’t pick up. Lawyers explain to Rudra that no one will want to put their hands in this case. He further explains to Rudra that they will have to wait till the case goes into the court.

In Prison, Prisha refuses to have food. She asks constables help to make a call to Rudra. Inspector Chautala allows Prisha to call and talk to Rudra for three(3) minutes. On the other side, Rudra is seen getting flashbacks of Prisha’s sacrifice and drinks a lot on the roadside. He feels bad for not being able to help Prisha. Rudra gets Prisha’s call and the latter says she was waiting for him. She tells him that she has just 3 minutes. Rudra tells Prisha that he failed after trying a lot to get her bailed out.

Prisha understands that she is not getting bail because of her confession. She asks Rudra to have strength to give her some of it too. Constable did not let Prisha talk to Rudra more.They apologized to each other in their thoughts. Sharda, Vasuda, Saaransh and Anvi reach shimla and get shocked seeing Rudra’s condition. Next morning Rudra cries in front of Sharda for being helpless. Sharda tries giving hope and strength to Rudra to fight for Prisha. She makes Rudra remember how Prisha always helped and saved him from past accusations. Sharda further explains to Rudra that Prisha never left hope while helping him.

She asks Rudra to have the strength to do everything to save Prisha. Unaware of the exact situation Anvi and Saaransh too give strength to Rudra. Sharda asks Rudra to promise that he will anyhow bring Prisha back. Rudra promises to fight for Prisha and get her free of Sanya’s murder. GPS too comes there and tells Rudra that he will help and support him. He tells Rudra that he can give him legal advice. Rudra feels blessed to have a supportive family like his.

GPS and Rudra goes to meet the same lawyer to get some solution to get Prisha free of Sanya’s murder charges. Lawyer repeats the same words that they will have to wait till the case goes in the court. Rudra loses his cool and gets angry at the lawyer. Lawyer explains his situation. GPS asks the lawyer to try bringing the case in the fast track court as they want to get Prisha out of Prisha as soon as possible. Both GPS and Rudra leave. Outside Rudra says to change the lawyer. GPS explains Rudra that every lawyer will say the same thing seeing the facts and proofs. Rudra says they need to find the proof. GPS agrees and says that every criminal commits the mistake of leaving some marks behind. He asks Rudra to find that mark. Rudra agrees to do so.

Reviewed Rating for Yeh Hai Chahatein 21st October 2021 Written Update Armaan exposed:
3/5 This rating is solely based on the opinion of the writer. You may post your own take on the show in the comment section below.