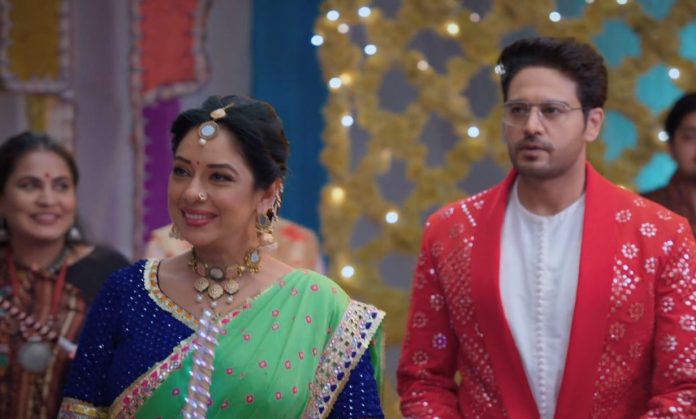 Anupama 21st October 2021 Written Update Heroic Anuj Samar receives a call from Anuj, who tells him that Rohan is in the Pandal. Anuj also asks Samar to bring Nandini with him outside. Paritosh hears their conversation. Nandini and Samar reach outside the Pandal, where Rohan and Anuj are seen waiting for them. Nandini asks Rohan what he is doing here. Other members of the Shah family too reach there. Paritosh asks Samar what Rohan is doing here. Angry Vanraj grabs Rohan’s collar. Anuj stops him from doing so. On Anuj’s insistence, Rohan apologizes for troubling Nandini and Samar.

He promises to not trouble Nandini anymore. Rohan shows Nandini that he is deleting their old photos. He tells Nandini that he forgot love is not snatched, instead we have to win over somebody’s love. Rohan thanks Anuj for stopping him from doing the wrong thing. He even apologizes to Anupama for getting Samar’s revenge from her. This shocks the whole shah family. He says, if Anuj wouldn’t have stopped him, he would have committed a big mistake. Anupama gets confused and asks Rohan if he wanted to kill her.

Rohan says that Anuj stopped him from attacking her. He again tells that Anuj again stopped him from attacking her when she went to get water. He again apologizes to Nandini for trying to hurt Anupama in anger. Rohan asks forgiveness from everyone and requests them not to call the police. Anuj says to Rohan that he will fulfill his promise till the latter fulfills his promise.

Nandini and Samar thanks Anuj. Samar says he knew if he would be there, everything will get alright. Kavya asks what exactly happened, why Rohan wanted to attack Anupama. Anupama asks what revenge Rohan wanted to take. Samar tells everyone about the fight between him and Rohan. Paritosh asks Samar why he took Anuj’s help, when family was there to help him. Samar says he would have informed them about his and Rohan’s fight, then they would have scolded Anupama for his mistake. He says that Anuj asked him again and again to tell the family the truth. Samar further says that he lied to Anuj that he told everyone the truth about the fight.

Paritosh scolds Samar, if due to him hiding the truth, Rohan would have hurt Anupama. Samar says he knew that Anuj would have handled everything. He asks everyone to see how Anuj cleared the problem named Rohan in a very short time. Bapuji too thanks Anuj and says very few people are there who help other people a lot. Devika too praises Anuj. Anupama says to Anuj that she has no words left to thank him. Anuj apologizes to Anupama, saying that he didn’t knew that Samar hid about Rohan and his fight from family. Vanraj also thanks Anuj for helping Samar and says that he became a hero for his children.

Anuj says to Vanraj that the latter would have done the same thing if Samar would have informed them about the situation earlier. Vanraj if Samar would have informed them earlier. Bapuji says, good win over evil this dussehra. Mamji jokes that elder sister (Leela/Baa) got defeated. Baa thanks Anuj for helping them. She says that the Pandal is not their family’s, it’s of the colony people. Baa further says that colony people will talk ill seeing an outsider and asks Anuj to leave. Anuj and GK leave from there saying he did for what he came. Host calls participants for the competition. Vanraj taunts Anupama that he couldn’t handle Anuj taking his place in his children’s life. Anupama says she and Vanraj are wrong as their children fear from telling their problems to them.

She tells Vanraj that Samar may have shared his problem with Anuj because he would have seen a good friend in him. Vanraj says to Anupama to explain to Anuj that he can be friends with his children but he cannot try to take father’s place in their life as he (Vanraj) is alive. On the other side, GK asks Anuj what happened? Anuj says that he knew, Shahs would have questioned Anupama seeing him. He also says that they will stay away from Anupama’s family. Anuj gets more angry seeing that has blocked his car. Devika asks Anupama how she could have let shah’s insult Anuj. She further says that Anuj is an idiot who helps shah’s again and again, who doesn’t value anybody’s help.

Devika says to Anupama that Shahs only give taunts to Anuj for helping them. She further says Baa crossed the line by asking Anuj to leave. Anupama asks Devika not to say anything ill about Baa. Devika says to Anupama that if Baa is older to them, it doesn’t mean that she cannot be wrong. She also says that Baa has some serious issues. She further says that nobody will say anything to her referring to her/elders as a god. Anupama says elders are like God. Devika asks Anupama to at least consider and treat Anuj as a human. She further explains to Anupama that Anuj would have not helped Samar by telling him that he doesn’t want to get involved in shah family’s matters.

Devika continues explaining to Anupama, that Anuj explained Samar, ousted Rohan from Nandini’s life and saved her from Rohan’s attack. She tells Anupama that Anuj would have not let them even know how he helped shah’s. Everybody got to know about it because Paritosh heard Samar and brought family outside. Devika scolds Anupama for being silent when shah’s taunts and insults Anuj for helping them. She again and again scolds Anupama for not respecting Anuj’s help and friendship. Anupama stops Devika from calling Baa a contract killer. Devika asks Anupama why she didn’t stand up for Anuj. She tells Anupama that shah’s just took advantage of Anuj. She asks Anupama if Kavya attended their family functions in the past then why Anuj being her friend cannot attend her family functions. She further asks Anupama why she didn’t question her family about it.

Devika tells Anupama that Vanraj always stood for Kavya and asks Anupama why she didn’t stand up for Anuj. She further questions Anupama that if Anuj would have not have helped her with her career getting scared of Baa, would she have been independent. She further tells Anupama that without Anuj’s help, Samar would have been in prison, Nandini in US, Baa in coma and she herself in hospital. She asks Anupama to learn friendship from Anuj. Devika angrily leaves from there. Anupama recalls Anuj’s help and Devika’s sane words. Bapuji tells Baa that she got defeated in life by insulting Anuj. Anupama stops Anuj from leaving and asks him to be her Dandiya partner in the competition. Surprised and shocked Anuj asks her if she is sure.

Anuj refuses Anupama’s offer. Devika offers mamaji to be his partner. Baa thinks it’s good Anuj left, otherwise people would have talked ill. Anupama enters the Pandal with Anuj, shocking and surprising people. Devika feels proud of Anupama. Anupama recalls how she convinced Anuj to stay and be her partner in Dandiya. Bapuji tells Baa that he already told her that she will not be able to win.

In the next episode, Anuj and Anupama will dance together and enjoy themselves. Baa will get angry at Anuj and blame him for fights in her house. She will ask Anuj to leave and warns him to dare not be seen in her colony. Anupama will shock Baa, saying that Anuj will not go anywhere. Anupama will say that wrong thinking Raavan/evil is still alive in their minds. She will further say that this evil thinking Raavan will have to die again. Anuj will lit the Raavan with Dhanush and Anupama will ask everyone to say “Jai Shree Ram”. Angry Baa and tense Vanraj will look on.

Reviewed Rating for Anupama 21st October 2021 Written Update Heroic Anuj:
5/5 This rating is solely based on the opinion of the writer. You may post your own take on the show in the comment section below.