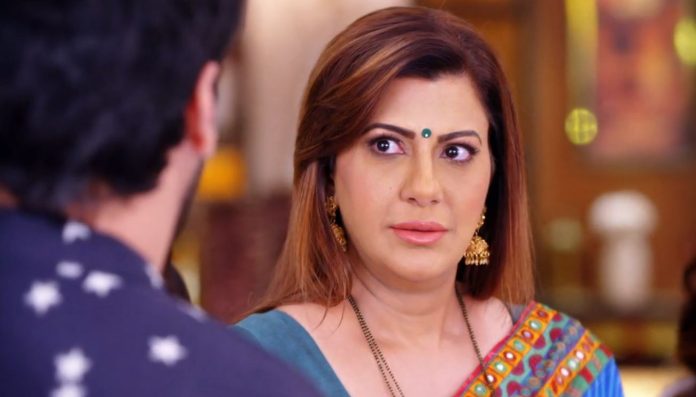 Kundali Bhagya 26th October 2021 Written Update Rakhi rages Sherlyn appeals to Rishabh to not judge her so soon and give her a chance. Rishabh believes her and agrees to give her a chance. He sits down to have the homemade food prepared by her. He gets emotional and cries seeing his favorite dish. Sherlyn gets overjoyed that he believes her still. She serves him the food. Rishabh eats it with joy and feels satisfied. She tells that she knew it, that he will really like it. Rishabh coughs a lot when he eats the over-spiced dish. She apologizes and tells that she will make it well next time. He tells that she had made it, he will still eat it.

He bears the spice and eats the dish. Sherlyn smiles and seems to fall in love with him, seeing him finish the improper food. Preeta goes to call Sherlyn. She finds Sherlyn and Rishabh together. She sees Rishabh smiling and happy with Sherlyn. She feels glad to see him so relaxed. She doesn’t disturb them. She goes out to see Rakhi and Sameer. She finds Sameer crying. She asks the reason. She asks where did Rakhi go. Sameer cries that Rakhi is so disturbed, and wants to stay alone. She asks what happened to Rakhi. He tells that Rakhi is terrified and talking strange things, she is afraid for Rishabh.

He cries to tell her that Rakhi is talking of suicide if anything happens to Rishabh. He adds that Rakhi and Mahesh, both would commit suicide if Rishabh gets imprisoned. Preeta is shocked to know this. She runs to Rakhi and consoles her. Rakhi shares her fears with Preeta. Preeta asks her not to get scared of anything. Rakhi tells that if Rishabh gets separated from her, then she will do the unexpected. She wants her devotion to win, else she will end her life. She doesn’t want to live without Rishabh.

Preeta tells her that Rishabh will get freed tomorrow. Rakhi doesn’t find any way. Preeta calms her down by revealing that she has a proof in Rishabh’s favor, Sandeep is lying about Rishabh, he isn’t injured, he just faked the accident, he will come to the court and give a statement in Rishabh’s statement, they can show the evidence and prove Rishabh innocent. Rakhi tells that they can go to the Inspector right away and save Rishabh. Preeta tells that they can’t tell anything to the police just to reach the mastermind, who is plotting against Rishabh. She tells that the person stays in their family and is destroying them.

Rakhi asks her to swear on her and reveal the name of the culprit. Preeta and Sameer tell Rakhi about the proof they gathered against Prithvi. Rakhi is shocked. Preeta tells that Prithvi had bribed, scared and threatened Sandeep to get this work done. She tells Rakhi how she saw Sandeep walking on his feet and going to meet Prithvi. Rakhi can’t believe this. She tells that Prithvi has got Rishabh arrested, he is staying in their house and enjoying his life. She wants to throw out Prithvi from the house and get him arrested. She asks Sameer to take her home. Rakhi arrives home to summon Prithvi. Kareena and Bani ask the reason.

Preeta asks Rakhi to listen to her. Prithvi asks Rakhi is everything fine, why does she look so angered. Rakhi angrily slaps him. This shocks the family. Prithvi asks her the reason for the slap. He sweetly asks his mistake. Rakhi tells that he is trying to ruin her family, that’s his mistake, he had sent Rishabh to the jail. She reveals his truth to the family. Prithvi feels Rakhi is mistaken. Kareena and Kritika defend Prithvi. Mahesh asks Rakhi what is the matter, how can she conclude Prithvi wrong. Rakhi tells them that Rishabh is behind the bars just because of Prithvi, who is paying Sandeep to lie and get Rishabh imprisoned. The family can’t believe this either. Mahesh questions Prithvi. Sameer asks Prithvi not to lie to anyone.

Rakhi tells that she will go home and slap Prithvi, before asking him the reason for his enmity. She tells that she can’t sit quiet after knowing such a big truth, she will take a step to protect her son. Preeta understands her. She explains that her move can alert Prithvi, he can either run away or plan against them to erase their evidences, he can manipulate Sandeep again, their plan can go waste, Prithvi is really clever and will not spare Rishabh. She knows Rakhi’s rage.

She asks Rakhi to control her anger for a day and not tell anything to the family. Rakhi agrees with Preeta. She asks what will they do. Preeta tells that they will act in front of Prithvi that they don’t have any evidence. She tells them that once Sandeep gives the statement in the court, then Rishabh will get freed, and Prithvi will get arrested. Rakhi cries thinking of Kritika’s sorrow. She tells that Kritika loves Prithvi a lot. She feels sorry. Preeta tells that Prithvi can never change, Kritika doesn’t deserve him, but some nice guy. She asks Rakhi to keep their plan a secret until they succeed.

Rakhi feels she has done some good deed in her last birth that she got Preeta as her bahu. She thanks Preeta. Sherlyn finds Rakhi in tears. She asks the reason. Sameer and Preeta take Rakhi and doesn’t let her tell anything to Sherlyn. They return home. Prithvi finds the silence in the house. He looks for the family. He finds Rakhi, Preeta, Sameer and Sherlyn tensed. He shows his fake support to Rakhi and tells that she can share the problem with him, he is also a part of the family. Preeta calms down Rakhi. She asks Rakhi to meet Pihu. He finds them behaving weird.

He tells Rakhi that he is always there as a son to help her. He realizes that Preeta is planning something. He stops Preeta for a talk. He offers her help regarding Rishabh’s case. Preeta plays a smart game to make him admit the truth. She knows that he is behind the conspiracy against Rishabh. She tells that he doesn’t even know anything, that the entire family is in stress, they have no evidence in Rishabh’s favor. She asks Prithvi to help her with the clue if he finds it before time. She fakes helplessness in front of him and leaves him puzzled. Will Preeta win in her plans this time and rescue Rishabh? Will Sherlyn really go on Rishabh’s side? Keep reading.

Reviewed Rating for Kundali Bhagya 26th October 2021 Written Update Rakhi rages: 4/5 This rating is solely based on the opinion of the writer. You may post your own take on the show in the comment section below.