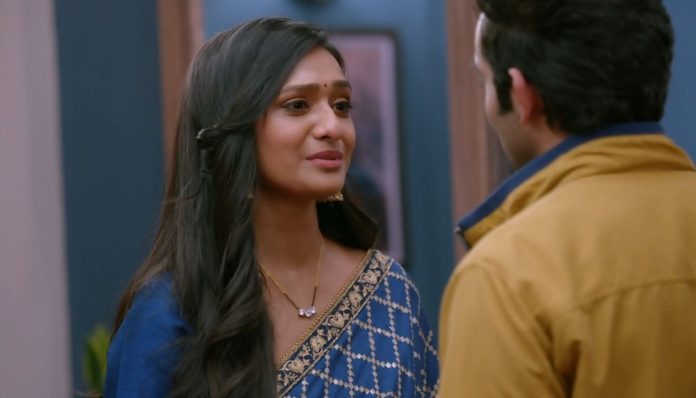 Bhagya Lakshmi 29th October 2021 Written Update Lakshmi high hopes Malishka shows Rishi the perfume she and her mom made. Rishi smells it and says that it is the same as last time. Malishka smells it and tells that she will ask her mom to add another ingredient. Rishi leaves for his home. Malishka’s mom says that Rishi is smart in his business but Malishka says that she had called him to show that she was fasting for Rishi. At the table, the family members have fun with Lakshmi. Lakshmi makes Rishi’s favorite vegetable and Virendra thinks that it is made for him. Aayush doesn’t let Virendra eat it and says that it is only for Rishi. Everybody teases Virendra because Lakshmi has not made the Aloo Tamatar sabji for him.

Lakshmi makes Sanjay go inside the kitchen and everybody teases Lakshmi for sending him in. Aayush teases that she has made sabji for Rishi. Aahana and Devika tease Lakshmi for blushing while listening to Rishi’s name. Dadi tells everyone to not tease Lakshmi. Neelam is worried because she had asked Rishi to be home and he has gone out. Rishi comes and everyone starts teasing him and Lakshmi together. Virendra says that Lakshmi has made Aloo Tamatar sabji for Rishi and because of him he will also get it. Rishi says he will not eat. Neelam asks him why and Rishi says that he has kept the fast. Everyone praises Rishi and says that no man has ever kept a Karwa Chauth fast for his wife in their family.

Lakshmi becomes emotional and goes away. Aayush goes after her. Lakshmi locks herself in her room and cries in happiness. Aayush bangs Lakshmi’s room door and asks her if he is ok. Lakshmi asks him to give her a minute and composes herself. Aayush asks her what happened but Lakshmi is reluctant to tell him. Aayush says that she can tell him and Lakshmi says that she cried with happiness.

Lakshmi tells that her father and mother used to fast for each other on Karwa Chauth. She says that after them she never saw any man keep a fast for his wife but Rishi has kept a fast for her. Lakshmi tells Aayush that Rishi loves her a lot and doesn’t want to live without her. Lakshmi asks Aayush if Rishi is fasting for her long life and Aayush says yes. Aayush becomes emotional listening to Lakshmi’s words. She says that she is very lucky to get Rishi as her husband. Rishi is feeling guilty as he listens to their conversation standing outside the room. Neelam asks her jeweler to give a good piece to her daughter-in-law for Karwa Chauth. Kirron calls Neelam and chats with her.

Neelam tells about jewelry shopping for Lakshmi and informs her that it is for one year only. Kirron says that she trusts her. Aayush informs Lakshmi that they are lucky because she came into their lives. Lakshmi says that because of Rishi she has a family who are nice and love her. Lakshmi finds Rishi outside and he tells her to not praise him so much. Rishi tries to tell Lakshmi that things may change between them and in the future, she may start hating him. Lakshmi says that she doesn’t want to understand such things.

Rishi promises Lakshmi to become a good friend if not a good husband. He also promises her to help her in getting a career, house, money, Chole Kulche, and Gulab Jamun. Rishi promises to bring these favorite dishes of hers on her birthday every year. Rishi asks for a promise from Lakshmi to never throw him out of her life in anger. Lakshmi smiles and says that he knows a lot of ways to express his immense love for her. Lakshmi tells Rishi that he used to express his love before marriage also and now after marriage too. Rishi says that he does care but didn’t realize how he started caring for her. Kirron manipulates Malishka that Lakshmi will become greedy after getting the jewelry and try to get Rishi at any cost.

Neelam informs Rishi to take Lakshmi for jewelry shopping. Kirron tells Malishka that Lakshmi will take Rishi away and she will just sit, keeping a fast. Lakshmi says she doesn’t want anything but Neelam says that it is a tradition and a husband gifts his wife on Karwa Chauth. Malishka says that Rishi will not gift anything to Lakshmi. Lakshmi tells Neelam that Rishi has already given her the gift by keeping a fast for her. Neelam says that it is his wish and not tradition so she has to take the gift. Lakshmi tells Neelam that as Rishi has kept a fast he will get tired and she doesn’t want to trouble him. Malishka manipulates Rishi into coming to her house. Rishi says that he has an urgent meeting in the office and there will be AC too so he will not get tired. Neelam permits him to go but asks Rishi to come before the moon comes out.

Neelam asks Lakshmi to get ready and come down. Sonia comes to Karishma and tells her that Rishi has kept a fast for Lakshmi. Karishma informs her that he has kept a fast for Malishka and not Lakshmi. Sonia asks that from when Malishka started believing in all these things and Karishma says that love changes everyone. Karishma says to Sonia that she will realize it when she falls in love and goes against her parents to get the man she loves. She advises Sonia that life is like that only and when you realize that there is another woman in your man’s life then you go crazy.

Reviewed Rating for Bhagya Lakshmi 29th October 2021 Written Update High drama: 4/5 This rating is solely based on the opinion of the writer. You may post your own take on the show in the comment section below.