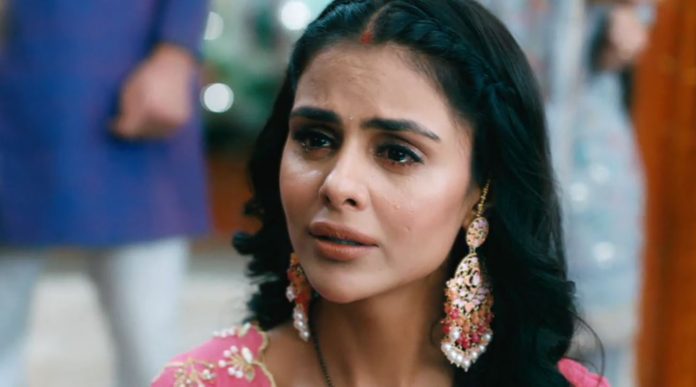 Udaariyaan 2nd November 2021 Written Update Jass attacks Tejo Fateh doesn’t agree for the engagement. Jasmin leaves Fateh embarrassed. Tejo gets angry on Fateh for spoiling the entire day. Fateh vents his rage on Jasmin for ruining the special party and upsetting them. Jasmin tells that its her dream to marry him, he left no option for her, when his family refused to attend their engagement. She blames Fateh and Tejo for compelling her to take this step. Angad excuses Tejo and takes her with him. Tejo feels much low. Khushbeer and Rupy stop Jasmin and rebuke her for the drama. Jasmin feels sorry for herself seeing their hatred.

Jass appears there again and catches Fateh. He takes Fateh to tell him Jasmin’s truth. Fateh doesn’t hear anything from him. He just fights Jass and doesn’t let him get a chance to speak. Jass tells him that he didn’t come to harm anyone, but just tell the truth. Fateh doesn’t listen to him at all. Jass wanted to tell Jasmin’s truth, but in vain. He faints there. Fateh locks him up and informs the police about his attack. He asks the Inspector to just come and take away Jass without letting anyone. He goes back to Tejo and hides about Jass.

Angad makes Tejo happy like before, and gets blessed by the families. Tejo goes for her performance, which soon turns into a competition by Jasmin, who wants to prove that she is better than Tejo. Fateh feels more upset by Jasmin’s deed. Jasmin wants Fateh on the stage, but he refuses. Fateh performs with Jasmin, while Angad doesn’t let Tejo alone. Angad joins Tejo and proves out that they are better.

The Virk family is left stunned by Jasmin’s unpredicted shocks. Angad and Tejo win the dance competition. This upsets Jasmin, who lectures Fateh for not dancing well like Angad did. She asks Fateh why does Angad always comes to help Tejo. Fateh asks her to stop doing a drama all the time. Jass breaks free from the locked room. He goes mad in anger. He has failed to tell the truth to Fateh. He decides to burn the place and take his revenge. Jass lights up the fire. He doesn’t see the place that is filled up with many innocent people. He just exacts his revenge on Tejo. Tejo finds Jass lighting the fire. She tries to stop him.

He becomes a nightmare for her once again. Fateh gets busy to convince Jasmin, who is filled up with negativity. Fateh learns about the fire break out. He realizes that both the families, and lots of people are stuck inside. He runs to save the families, who are already shouting for help. Tejo tries to run away from Jass, but gets caught by him. Jass stops him from reaching Fateh. Will Jass tell Jasmin’s truth to Tejo? Will Fateh come to save Tejo or will it be Angad this time to turn into her savior? Keep reading.

Jass shows his face to Tejo and laughs on her. Everyone is busy with Angad. The family doesn’t know about Tejo in danger. Jass catches Tejo and tells that he will burn everyone down. Jass tells her that he will take his revenge. Tejo requests him to not harm anyone. Tejo is shocked when he lights the fire and sets the building on fire. The people start panicking to find a way out. Fateh is busy convincing Jasmin that he is doing everything for their future, because he loves her. He expects her to keep some patience.

Jasmin agrees to him. They soon learn about the fire breakout. They rush to help the families, while Angad looks for only Tejo. Jass catches Tejo and doesn’t spare her, while she begs him to leave her and let her go to save the family. Jass gets evil and snatches the costly necklace from her. She is ready to give him anything, and just run to the family. Jass attempts to burn her alive and kill her. Tejo falls helpless in front of him. Tejo shouts for help. Angad is around and sees her running with the fire caught by her dupatta. He saves Tejo in time. Jass gets mad seeing another hero in Tejo’s life.

He taunts her for getting a new man so soon. Jass wants his revenge any how. He tells that he won’t go without killing them. He attempts to kill both Angad and Tejo. The family reaches there in time and finds Tejo unconscious. They try to help Tejo and Angad, while Fateh also becomes a protector in time. Fateh guards Tejo and fights the evil Jass. Jasmin fears that Jass is back, and he may reveal her name in front of Fateh any time. Fateh awaits the police to come and arrest Jass.

Fateh assures that he will handle Jass. He trusts Angd and lets him be with Tejo. The families want Tejo to get fine. Fateh doesn’t let Jass run away. Tejo gets conscious. She tells the family about Jass. Jass still flees. Fateh and Tejo get worried for each other. Fateh apologizes to Angad for all the mess. Angad is happy that everyone is safe. Fateh is worried for Tejo. The family takes Tejo home. Seeing Fateh’s concern for Tejo, Jasmin tries to intervene. She takes his attention by acting sick. She still tells him that she wants to marry him, because she loves him.

Jasmin apologizes to him. He asks her to stop her kiddish behavior and have patience. She tells that she wants to soon go to Canada with him and fulfill her dreams. He questions her if Canada is still her dream. He tells that she had cleared to him that he is her dream. He asks her to just stay happy with him. Jasmin wants to go abroad some way. She also wants Fateh. Fateh enquires Tejo’s well-being. Fateh gives medicines to Tejo. He wants her to get fine soon. He expresses his concern. Tejo is thankful to him.

Angad calls up Tejo to know if she is doing good. Tejo tells him that she is totally fine. Angad tells her that she is really strong and unique, he knows everything about her. He likes her selfless side, that she is working for the academy when she holds no stake in it. He didn’t see anyone so dedicated in the work before, when she has no profits involved. He tells her that he is really glad to work with her. He asks her to keep high spirits. Tejo is thankful to him.

Later, Gurpreet meets Tejo and cries in front of her. Tejo asks her the reason for her worries. Gurpreet reveals that Fateh is again speeding up the divorce on Jasmin’s saying. Tejo tells that the relation is over and the divorce is the only solution now. Fateh is thankful to Tejo that she agreed for the divorce just for the sake of his love, when the entire family is against her decision. Gurpreet asks Tejo to save Fateh from evil Jasmin. She is sure that Fateh will not marry Jasmin once they tell him Jasmin’s real truth. She asks Tejo to save him from a wrong girl, his entire life will be ruined in his blind love for Jasmin.

She tells that Fateh is innocent, but Jasmin is really cunning. She pleads to Tejo to tell Jasmin’s truth to Fateh and open his eyes. She asks Tejo not to let her sister ruin Fateh’s life. Tejo gets into a dilemma. She then learns that Jasmin has stolen the passports from her locker by fooling Fateh and her. She reaches Fateh, who shares a good news with her about the academy. He tells that its all thanks to her that he could reinstate Khushbeer’s lost pride and their reputation. He adds that she had got Angad for the investment, which he could have never done.

Tejo tells him that she is happy for him, but she has lost a good friend that she had before. He tells that he is still her friend and will always be. She asks him to have sincerity in their friendship bond. Fateh thanks her for always being true to him. Tejo decides to tell him Jasmin’s evil truth and leave the decision on him. She doesn’t want him to live in darkness and take wrong decisions. She doesn’t know if he will believe her. She finally reveals Jasmin’s evil truth to him, but will he believe her? Keep reading.

Reviewed Rating for Udaariyaan 2nd November 2021 Written Update Jass attacks Tejo: 2/5 This rating is solely based on the opinion of the writer. You may post your own take on the show in the comment section below.