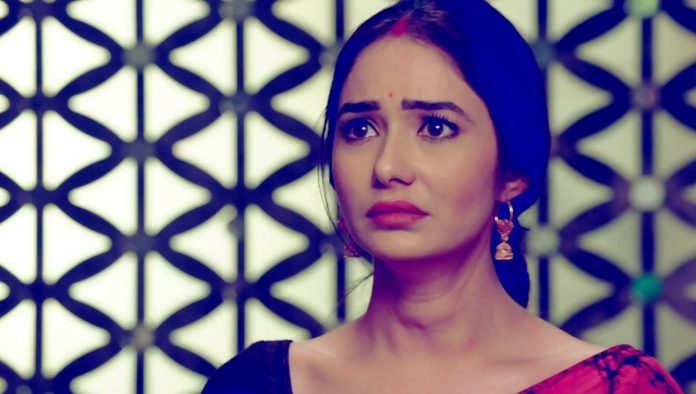 Kumkum Bhagya 3rd November 2021 Written Update Tanu in tears Pragya proves Abhi innocent and brings him home. Abhi confronts Aaliya and Tanu for still working with Gaurav against Pragya. He tells Tanu that Pragya’s enemies are his enemies. He removes Tanu’s mangalsutra and shocks her. He further adds that she has no right to wear the mangalsutra. He tells that just Pragya has a right to wear it, since she is the one who has the right on him. Tanu is left in shock, and even Aaliya can’t believe Abhi’s shocking move. Abhi gets them to their right place, knowing they had put him at stake just to take their revenge on Pragya. He reminds that he had earlier warned them to stay away from Gaurav. Pragya wants Abhi to oust Aaliya and Tanu from the house.

Ranbir confronts Rhea for her confession that she loves him. She admits that she loves him, but adds that she didn’t say that she wants to get him. She acts dedicated and loyal towards her husband Siddharth. Ranbir asks her to stop it and not making things odd in their relations. Rhea deliberately falls into Ranbir’s arms, just to show Prachi. Prachi happens to see them together. What will Prachi do now? Keep reading.

Thapar informs Gaurav that Aaliya had come home to insult them. He tells the way she had lost control. Gaurav tells that Aaliya is shouting for Abhi’s sake. He doesn’t think she can do anything to them. He tells that he has dealt with Abhi well and took his revenge. He gets Aaliya’s call. Tanu demands the money. He jokes on their demands. Aaliya scolds him for putting her brother in the jail. He tells her that he doesn’t owe her anything. Tanu is adamant to get the money, but Aaliya wants the proof for Abhi’s innocence.

He refuses to give any money or any proof. She asks him not to cheat her. He tells her that she isn’t loyal to her own family. He tells that she cheated Abhi, she fooled the family and he fooled her. He doesn’t think that he did wrong to make her taste her own medicine. She asks for the proof for her brother’s innocence. He tells that Abhi will come out if he is proved innocent, he will then go back to Pragya. She tells that she wants her brother home, she isn’t doing anything to help Pragya. Tanu counts her help. Gaurav tells that she can’t ask for any share, when he has done everything against Abhi.

Aaliya tells that she had convinced Pragya to hand over her property to him. Abhi arrives home and rushes to meet Aaliya. Tanu asks Gaurav why did he cheat them after snatching everything from Pragya. He adds that Pragya would ruin herself for her husband’s sake, they have nothing to do in this case. He asks them to go away. He tells that he is going to sell off Pragya’s property, he is leaving the country, he will never meet them. Tanu threatens him. She tells that they didn’t even spare Pragya, they will not spare him as well. He asks her what did she do.

She tells that she got Pragya’s car brakes failed, she created a doubt in Pragya’s mind to make her believe that Abhi is her murderer, Pragya was almost dead. She counts her crimes to show off her smartness to Gaurav. She admits her crimes. She tells that she will do the same with Gaurav now. She threatens him. He asks her to do anything she wants. Abhi overhears their entire conversation. He is ashamed of them. He can’t believe that they have stooped to this level and tried to kill Pragya by putting an illusion against him. Aaliya and Tanu are also shocked to see Abhi.

Rhea falls into Ranbir’s arms after confusing him about her feelings. Prachi sees them. Ranbir tells her that he just helped Rhea who was falling down. Rhea asks him why is he clarifying like they have trust issues and lack of love between them. She goes away. Prachi tells that Rhea is getting weird, she is behaving really strange and interested in Ranbir. He tells that she shouldn’t doubt him that he is getting attracted to someone else. She slaps him with love. She tells that she trusts her husband, who just loves her. She asks him to be careful. He teases her. She hugs him.

She just wants him always. She tells that she is feeling a bad happening. Moreover, Tanu lies to Abhi that she is really happy to see him back, her prayers have worked and he is back. He pushes her away when she goes to hug him. He asks Aaliya to leave along with Tanu. Aaliya asks him what has she done. Tanu asks if Pragya has filled up his mind against them. Aaliya tells that they are concerned for him. He tells them that he has overheard everything, how they had made a plan to kill Pragya by failing the car brakes, how they used his name to kill Pragya. He is ashamed that his sister can do such a thing.

He rebukes them for planting hatred in Pragya and his relation. He tells that they have made Pragya hate him, but still Pragya loves him a lot, Pragya has named her everything to Gaurav just to save him. He tells that Pragya doesn’t know their truth, she thinks he is wrong and even then she handled him in the sorrow. He asks Aaliya how can she do this, how can she sell him to Gaurav for his revenge. He is thankful that Pragya has saved him. He feels Gaurav is true in his enmity, while his sister is just ruining him. He learns that Aaliya wanted to kill Pragya and separate them forever. He tells that she used him to help Gaurav ruin Pragya’s business. He adds that she is more dangerous than Gaurav.

He asks her why did she get born as his sister, when she never stays loyal to him. She tells that she will respect Pragya and him from now. He tells that she doesn’t even respect their blood relation, she can’t respect Pragya ever. Tanu tells that she will be with him, she is his wife. Abhi yells at them and asks them to leave the house. He drags Tanu downstairs. Aaliya asks him where will they go. He asks Tanu to leave the house. He also pushes Aaliya out. He warns them to not come back. He doesn’t want to kill Tanu and go to the jail. He tells that he won’t waste Pragya’s sacrifice.

Tanu counts that she saved him from the molestation case. He tells that she trapped him first and then saved him just to convince him for marriage. He shouts that Pragya got saved because of her love, Pragya has come back in his life. Tanu tells that Aaliya was always with her, she made her sit in the mandap and sent Pragya away. She clarifies that she loves him. Both Aaliya and Tanu blame each other. He tells that he is ashamed to have a relation with them, they both have failed in keeping relations. He sings Pragya’s praise. He tells that Pragya kept a relation for her Kumkum’s sake, while they just kept enmity with Pragya.

He adds that Pragya’s enemies are his enemies. He removes Tanu’s mangalsutra and snatches the rights. He tells that Pragya holds the right on him and his mangalsutra. He claims that nobody can separate Pragya and him. He asks them to get out. He locks the door after ousting them. Aaliya begs him to get her in.

She adds that Gaurav won’t get anything now, Prachi is the owner of everything that belongs to them, Gaurav has been defeated. Pragya is too happy to know Sushma’s smart move. She tells that Sushma has not let anyone know about it. Sushma adds that Gaurav would get the papers checked, and know the truth now. Pragya praises her for making the miracle. Gaurav rechecks the papers. He is shocked to get cheated by Pragya. He feels badly lost. He vents his anger, once the clients leave. Sushma and Pragya come home. They are happy that life has come on track with Abhi’s return.

Sushma tells that its the true love of Abhi and Pragya that brought them together. They plan to celebrate Diwali. Gaurav gets revengeful. Abhi calls him up to threaten him. He asks Gaurav to stay away from Pragya. He tells that Gaurav has snatched everything from Pragya, but he won’t get spared. Gaurav tells that he has to settle scores. He calls Abhi to meet him at his hotel. Abhi gears up to meet him and teach him a lesson. Aaliya and Tanu spy on Abhi, and learn about his meeting with Gaurav. Tanu wants Abhi dead. She asks Gaurav to kill him. Aaliya and Pragya learn Tanu’s plotting, and slap Tanu for her mad move. What will Gaurav plan next? Will Gaurav kill Abhi? Keep reading.

Reviewed Rating for Kumkum Bhagya 3rd November 2021 Written Update Tanu in tears: 5/5 Finally, Aaliya and Tanu taste their own bitter medicine. Abhi’s best move till date. Full episode ratings changed after the commenter’s insights. This rating is solely based on the opinion of the writer. You may post your own take on the show in the comment section below.