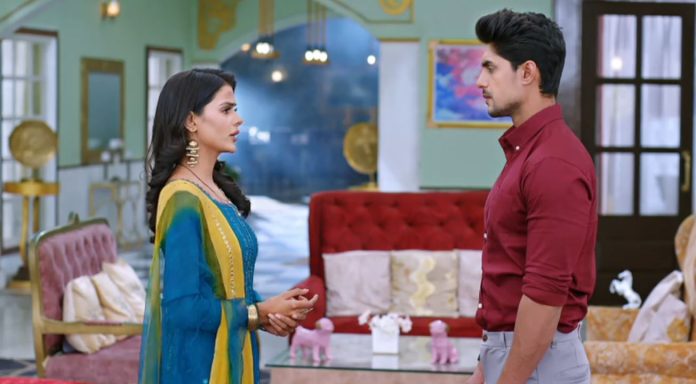 Udaariyaan 4th November 2021 Written Update Divorce Finale The Virk family wait for Fateh at the court. They have no answers when Fateh doesn’t come for long. Gurpreet and Biji wish that Fateh has really gone away to avoid the divorce. The family is worried for him just to know his final decision on the divorce. Jasmin’s lies have hurt Fateh a lot. He takes time to think about his relation with his sincere wife Tejo. Tejo is also hopeful that he will take the right decision, after all he got to know Jasmin’s truth. The Virks think Fateh doesn’t want the divorce. Tejo can’t back out from the divorce since she has already promised Fateh that she will not come in his way when he decided to marry Jasmin.

The family knows that Jasmin won’t wait for a day for her marriage if Fateh and Tejo get divorced. Mahi tells that even Jasmin isn’t answering. Gurpreet wants her son to be okay, but not come to the court. She prays that the hearing gets dismissed. After two hours of waiting, the lawyer tells them that the hearing maybe called off by Fateh’s absence. Tejo wants the happiness of her friend. She learns about Fateh, and goes to bring him from the academy.

Its Tejo again who finds Fateh and brings him to the court, knowing his arrival will end their relation forever. She proves it once again that sacrifice is in her nature. Tejo gets good wishes from Angad, who knows that she is going for her divorce. Angad finds out about Tejo’s life and her miseries. After seeing Fateh and Jasmin’s open romance drama in the Diwali party, he just wants Tejo to get her deserved happiness by breaking her unwanted bond with Fateh.

Angad doesn’t tell Tejo that he is aware of her life’s sorrows. He knows she is strong and can handle it. Tejo and Fateh come back to the court in time. They go in front of the judge, who makes it clear to them that their decision today will be the final one, their signatures on the papers will break their marriage for once and all, they will have no terms once they sign the divorce papers. Fateh and Tejo feel the pain of the dying relation and separation. Fateh doesn’t want to bound her when he doesn’t love her. Tejo also doesn’t want to bound him when he loves someone else and wants freedom from her. Both of them decide to sign the papers for each other’s betterment and future. Will they sign the papers and get divorced? Keep reading.

Tejo gets a call from the academy. She tells the families that a student is hurt and she has to go and see him. Khushbeer finds her really good-hearted and dedicated. He praises Tejo once again who cares for everyone. Tejo goes to the academy, and finds Angad there taking care of the student and sending him to the hospital. She tells him that she needs to leave for an important work. He first tells her that he had come for academy inspection to make some necessary changes to make it reach the international level with new equipment.

He wishes her all the best for her work. She tells that he doesn’t know for what she is going, sometimes things aren’t such as they wish for. He tells her that a good person finds a way out from the unwanted situations as well, that’s a victory. He encourages her to give her best and get the best results. Tejo goes back to the court. Angad tells that he knows Tejo has gone for her divorce with Fateh. He wishes she stays strong and ends the marriage with Fateh. On the other hand, Fateh is at some bar, drinking and trying to get over Jasmin’s cheat. He doesn’t want to believe Jasmin again.

Jasmin tracks him and comes there to meet him. She tells him that she can explain him why she took that step. She pleads him to trust her love and give her one chance to explain. He lets her explain if she can convince him. The families are waiting for Fateh at the court, but wish in their heart that he doesn’t come. Tejo apologizes to the lawyer and tries to get a date for the next hearing. Lawyer tells her that if Fateh doesn’t come soon, then they will have to wait for another two weeks. Tejo doesn’t want to drag the divorce for long. She wishes Fateh comes back, because its him who wanted the divorce. Jasmin comes with her own stories to convince him and asks him to divorce Tejo if he wants to save three lives. Fateh heads to the court with Jasmin, while the entire is waiting for him.

Jasmin emotionally blackmails him and tells that she has lied to him many times just for his love, he means a lot to her. She puts the entire blame on him, that he married Tejo and forced her to do all this drama. She tells him that she loves him a lot, but maybe he doesn’t love her. She adds that she is mad for him, her family and nobody else exists for her. She tells him that she did everything to prove her love. He still questions her the reason for burning Rupy’s passport instead her own.

She cries and convinces him to just divorce Tejo. Fateh comes to the court for the divorce just when the family was about to leave. Fateh tells that he has decided it, he wants the divorce. The judge asks Fateh and Tejo to think once again. Fateh sticks to his decision. The families sink in sorrow with his decision, seeing Tejo’s life getting ruined. Both Fateh and Tejo sign the divorce papers, and end their marriage. Jasmin rejoices that she isn’t a second woman in Fateh’s life anymore, Tejo is finally away from his life.

The families return home. Tejo feels alienated in Virk house. Jasmin meets Tejo to insult her. She tells Tejo how she lied to Fateh to convince him for the divorce. She tells that she lied about Gippy putting pressure on her for the engagement and getting away with the passport, she had no time to prove her love to Fateh and win him over, that’s why she took the desperate move to burn Rupy’s passport. Fateh gets mad that he believes her cunning lies once again. She tells him that she loves him a lot and would do anything for him. Fateh makes Jasmin promise that she will never lie to him. She falsely promises that she won’t lie ever.

After the flashback, Jasmin makes fun of Tejo who doesn’t have any right on Fateh now, even when Fateh and Tejo were in love for a temporary phase. She tells that Fateh is just her love. Tejo pities Fateh who got cheated once again by believing Jasmin’s lies. She tells that Fateh’s bad time is going on and he will be ruined if he is with Jasmin. Jasmin replies that she will be marrying Fateh and then heading to Canada with him. Tejo wishes her all the best. Jasmin asks her to stay in Virk house for couple of days and then leave. Tejo tells that her rights got snatched on the same day when she caught her husband cheating.

She decides to leave the house right away. Rupy comes home to take Tejo. Virks decide to keep Tejo with them. Khushbeer tries hard to stop Tejo, but she doesn’t want to stay back this time. Jasmin is happy to see Tejo leaving. Virks had a bond with Tejo, and doesn’t want it to break after her divorce with Fateh. Jasmin thinks Tejo will never find true love in her life, but fate has planned Angad for Tejo’s happiness. Khushbeer wants Tejo to get married. What will be Tejo’s answer? Keep reading.

Reviewed Rating for Udaariyaan 4th November 2021 Written Update Divorce Finale: 5/5 This rating is solely based on the opinion of the writer. You may post your own take on the show in the comment section below.