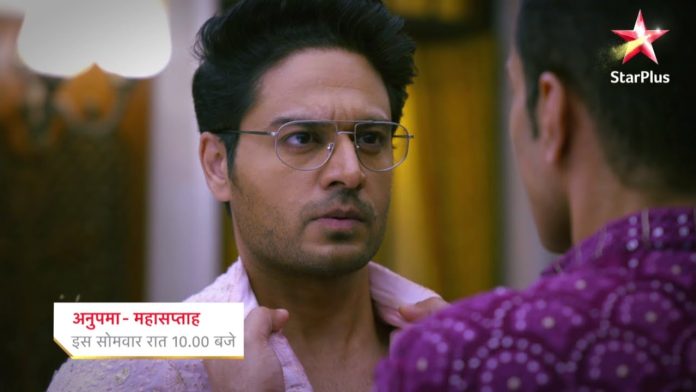 Anupama New Promo Update Anuj shouts I love Anupama Anuj meets the Shah family for the sake of Anupama. He knows she has shifted to a new house, but still misses the Shah family. Anuj tries to find a way to clear he misunderstanding grown in Vanraj and Leela’s mind. Anuj meets Vanraj, Leela, Kavya at the Shah house. He tells them that he doesn’t want any problem in Anupama’s life from now on. He asks Vanraj to take it as a request or a warning, but stop hurting Anupama by staining her character, by making her pure friendship dirty.

He asks them to stain his character if it pleases their ego and makes them happy. He asks them to please spare Anupama, who has suffered a lot in her life and deserves to stay happy. Leela accuses Anuj and Anupama for already harming the reputation of Shah family. She tells that they both have already done a lot of damage to her family. Anuj tells that he has just come for the sake of his friend Anupama. Vanraj asks Anuj to stop fooling them by calling himself just a friend of Anupama.

He catches Anuj’s collar and asks him to confess that he loves Anupama. He tells that Anuj loves Anupama, and he can clearly see that in Anuj’s eyes. He asks Anuj to not lie to himself and them further. He tells that Anupama also loves Anuj. Anuj wishes it was true, that he got lucky to get Anupama’s love. On Vanraj’s instigation, Anuj angrily shouts out his love for Anupama. He admits that he loves Anupama a lot, he loved her for the past 26 years and he loves her even today.

Vanraj and Leela are shocked by his confession. Anuj and Vanraj aren’t aware that Anupama is also around and overhearing their argument. Anuj’s love confession comes as a huge shocker for Anupama. She didn’t expect him to still have the love feelings for her. She worries seeing Anuj accepting his love, and tarnishing their friendship. Anuj has brought the big secret of his heart out. How will this affect Anupama? What will be Anupama’s answer to Anuj? Will she keep her friendship with him or break it to satisfy the Shahs? Comment your views. Keep reading.

Reviewed Rating for Anupama New Promo Update Anuj shouts I love Anupama: 5/5 This rating is solely based on the opinion of the writer. You may post your own take on the show in the comment section below.