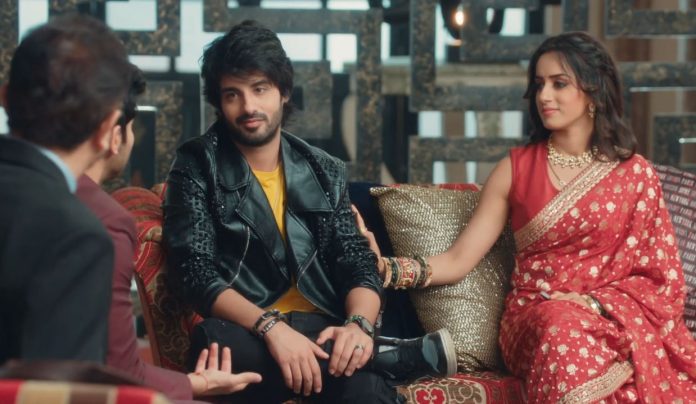 Yeh Hai Chahatein 4th November 2021 Written Update New track Rudra wakes up. He asks Prisha to open his handcuffs. Prisha opens the handcuffs and Rudra asks to spend some time with him as Saaransh is sleeping. He gets a little romantic with her but gets interrupted by a call. Prisha asks him to pick up as it may be important. Rudra says why doesn’t the world let them spend time with each other. Rudra picks up Param Aneja’s call who tells him that a new company wants him to sing for them. Rudra replies that he already told him that he will sing only for Prisha records. Prisha tells Rudra that she thinks he should at least meet the new company as he needs investors for himself.

Rudra agrees and asks Param to fix the meeting with the new company at Khurana Mansion only. Prisha and Rudra get romantic but get interrupted by Saaransh. Rudra and Prisha reach the breakfast table. Mishka tries to bring coffee for Rudra. Sharda gets angry and doesn’t allow her to do anything for Khuranas. She tells Mishka that she can’t forgive her for what she did for Saaransh. Mishka leaves upset. Rudra asks Sharda to forgive Mishka. Both Rudra and Prisha requested Sharda to forgive Mishka as she wants to change into a good person. Sharda tells them that everything can change but not a person’s true nature. Prisha says to Sharda that Mishka proved that she changed.

Sharda asks Prisha if she wants them to allow Mishka to live at Khurana Mansion forever. Prisha says that everyone should get a second chance. Both Rudra and Prisha tell Sharda that her decision will be the final one. Sharda replies that she is happy in whatever they are happy with. On the other side, Vasudha and GPS are seen cleaning the house for diwali. A photograph of three children falls, which shocks both GPS and Vasudha. GPS asks how this photograph got left in the house when they threw everything. Vasudha says she isn’t able to forget old things even after trying a lot. She asks why the past comes back? She leaves crying. GPS says the past didn’t go anywhere but is hidden so that it doesn’t hurt anyone.

Param Aneja reaches Khurana Mansion and explains his company’s contract with Rudra. He offers 60% percent partnership to Rudra. Rudra says to Param that he will have to bear 100% loss in this offer. Param says loss will be initial only. He explains that in further concerts his investment as well as profit will double. He asks Rudra and Prisha to give their final decision. Rudra agrees to Param’s offer. He in advance tells Param that he will never do wrong work. On the other hand, GPS gets tensed after receiving someone’s call. He tells Vasudha he is going to meet Subu.

Mishka and Param’s car hits each other and the former shouts at the latter. Mishka calls Param an idiot. Both of them get into a war of words. Mishka warns Param that she will get him arrested. Their argument continues. Mishka calls Param rude. Param calls Mishka an arrogant and sadu girl. He tells Mishka that he doesn’t want to see her face. Mishka asks him to get out and asks the guard to not let this person enter Khurana house ever. At the dinner table Rudra tells that he has got a good contract. Mishka says that she is sure Rudra will sing romantic songs only. Sharda asks them to have food.

Vasudha reaches Khurana Mansion and reveals that GPS got tensed after receiving a call in the morning. She also tells Prisha that GPS left telling that he is going to meet Subu, but Subu told that GPS didn’t meet him. Rudra asks Vasudha to calm down. Prisha too tries to calm Vasudha. Rudra, Prisha and Vasudha leave to find GPS everywhere he could go. They reach three houses and fail to find GPS. They think to call Police. Vasudha gets a call and is asked to return home. Prisha, Rudra and Vasudha reach Srinivasan house. They question GPS where he was. Vasudha scolds GPS for making her worried. Prisha and Vasudha go inside the house. Rudra tells GPS that he got trapped badly.

He too advises GPS to apologize to Vasudha. GPS does the same thing and apologizes to Vasudha. GPS tries to explain to Vasudha that he went to meet Subu in the park. Vasudha says that GPS is lying. GPS calls Subu to tell Vasudha that he was with him the whole day in the park. Subu tells Vasudha that GPS was with him. Vasudha says his wife told that GPS didn’t come. Subu explains that his wife didn’t see them because she was not in the house at that time and after that they went to park. After the call gets disconnected, Subu’s wife asks him why he lied? Subu says GPS asked him to lie. He thinks till when GPS will hide the truth from Vasudha. GPS gifts gajra for Vasudha. Vasudha gets happy and asks GPS to tie it in her hair.

In the next episode, Subu will ask GPS till when he will hide the truth from Vasudha. GPS will say it will be good if the secret remains secret. Rudra will explain to Param that he and Prisha don’t get time for each other. Param will tell Rudra he wants to arrange a special date for him and Prisha. Rudra will feel suspicious. Vasudha will get angry on hearing GPS’s plan to go on a trip with Subu and his friends. Rudra will get romantic with Prisha as she will plan a romantic night for him.

Reviewed Rating for Yeh Hai Chahatein 4th November 2021 Written Update New track: 5/5 This rating is solely based on the opinion of the writer. You may post your own take on the show in the comment section below.