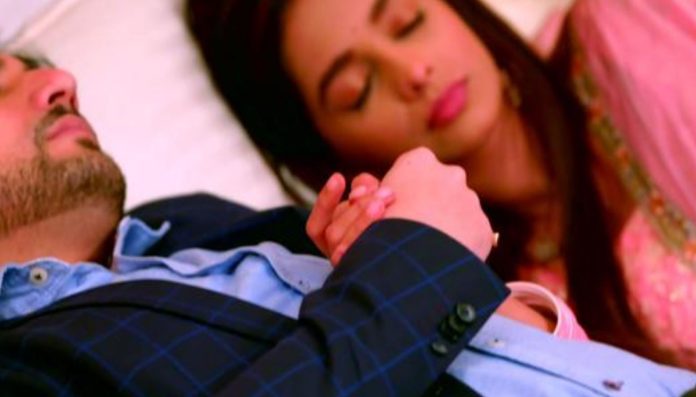 Kumkum Bhagya 10th November 2021 Written Update Doom Rhea gets Ranbir to the hotel room, where Siddharth and Prachi had come to catch Abhi and Pragya’s attackers. Aaliya tricks Siddharth, knowing Prachi believes him and will come running to find the culprit. Innocent Siddharth and Prachi fall into Aaliya’s trap. Aaliya faints them down, and puts them on the bed. She asks Rhea to get Ranbir to the room as soon as possible. Ranbir tells Rhea that he will prove her wrong. Rhea asks him to look at his wife’s misdeed himself. Ranbir enters the room, and is shocked to see Prachi sleeping with Siddharth, holding hands like lovers. He is shell shocked.

Rhea sheds fake tears and tells that his ignorance has encouraged them to cheat. She accuses Ranbir for motivating Prachi to have an affair. She cries that she lost her love to Prachi first and now her husband. Ranbir gets raged and shouts Prachi. Prachi gets conscious, followed by Siddharth. They find themselves in the bed, and see Ranbir and Rhea staring at them. Will Pranbir’s love pass this difficult test of faith or will Rhea bring the doom over their relation? What do you think about the Kumkum Bhagya for Ranbir and Prachi? Keep reading for a full update.

Reviewed Rating for Kumkum Bhagya 10th November 2021 Written Update Doom: 1/5 Aaliya and Rhea boast of their love and concern for Abhi always, but doesn’t stop themselves from making such disgusting plans in such times when Abhi is struggling for his life. They prove that their evil minds have no pause button, and they care the least for Abhi’s coma state. Rhea is more disgusting to target her sister’s happiness, when their parents are already on the verge of death. Really disgusting track. Hope that Abhi and Pragya come back from comatose. This rating is solely based on the opinion of the writer. You may post your own take on the show in the comment section below.

Ranbir shouts Prachi. Prachi gets conscious on hearing him. Ranbir rebukes her. He tells her that he got to see her extra-martial affair. Prachi and Siddharth can’t believe his accusation. Rhea gains Ranbir’s sympathy. Siddharth asks Ranbir what nonsense is he saying. Prachi asks Ranbir who has fed such dirty things in his mind. Rhea tells Prachi did she just get her family to ruin. Prachi asks what is she saying. Siddharth asks what is happening. Ranbir asks him not to act shocked, his truth is out. Rhea tells that Siddharth is her husband. Ranbir blasts his anger on Prachi.