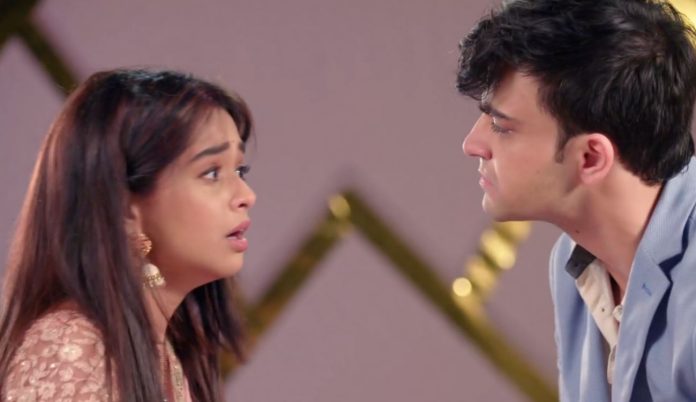 Kumkum Bhagya 11th November 2021 Written Update Mad Ranbir Prachi and Siddharth get locked inside the room. Prachi wants to see who is hiding inside. Aaliya spreads the smoke in the room to faint them down. Siddharth tells that the smoke maybe harmful, they shall first get out of the room. Siddharth tells her that the exit door also got locked. Prachi sights Aaliya there. Before Siddharth and Prachi can understand what’s happening there, they faint down. Ranbir knocks the door. He asks room service to open the door, he forgot his wallet inside. He gets the room opened. He enters the room, and is shell shocked to see Prachi and Siddharth sharing the same bed. Rhea asks Ranbir does he believe her now. She tells him that Prachi has cheated him. Ranbir shouts Prachi.

Prachi gets conscious on hearing him. Ranbir rebukes her. He tells her that he got to see her extra-martial affair. Prachi and Siddharth can’t believe his accusation. Rhea gains Ranbir’s sympathy. Siddharth asks Ranbir what nonsense is he saying. Prachi asks Ranbir who has fed such dirty things in his mind. Rhea tells Prachi did she just get her family to ruin. Prachi asks what is she saying. Siddharth asks what is happening. Ranbir asks him not to act shocked, his truth is out. Rhea tells that Siddharth is her husband. Ranbir blasts his anger on Prachi.

Siddharth tells Prachi that they came to the hotel for the purpose. Ranbir hurts Prachi in anger. He asks Siddharth not to intervene. He asks Prachi why did she cheat him. He doesn’t listen to her. He tells her that he left his family and did a lot for her love, he gave her freedom and she had cheated him, she didn’t keep the marriage vows, she ruined his faith. He accuses her for having a bad character. He accuses her for having such feelings for Siddharth. He tells her that he wanted to become the best husband, but became a fool.

He crosses his limits and hurts Prachi’s heart. Siddharth asks him to not cross his limits. Ranbir reminds the limits crossed by Siddharth. He feels Siddharth has ruined his family, he is a devil in disguise. Ranbir asks Siddharth to accept that he wanted a wife like Prachi, he was jealous seeing their love. He tells that Siddharth didn’t think of him. He wants to beat Siddharth. Prachi calls it enough. Ranbir apologizes that he has tried to hurt her husband Siddharth. Prachi doesn’t want to answer Ranbir. Ranbir tells Prachi that she should cry by shame. Rhea watches their drama and enjoys.

Ranbir tells that he was praising them when someone was trying to open his eyes, but he was actually a fool to blindly believe them. He accuses Prachi for breaking his heart. Prachi asks Ranbir why isn’t he able to see her love. He tells that he was planning his future with her, but she used to plan her outings with Siddharth. He misunderstands Prachi. She asks him to stop insulting their relation further. She tells that he is making fun of their love and marriage. She scolds him and tells him that she has his Kumkum in her maang. Ranbir tells that maybe the Kumkum is also of Siddharth’s name. Prachi warns him against crossing limits.

Ranbir asks her if she will kill him and go away. He tells that he will not keep her in his life. He breaks their relation. He tells that he hates her, he is angry on himself for loving her. He isn’t able to tolerate her deceive. He tells her that he used to love her so much, and now he understand that a cheat is always beautiful. She tells him the truth that she just loves him. She asks him to ask his heart if she can cheat him. He loses faith on her. He finds her lying. He curses her. Ranbir ends his relation with Prachi. Prachi walks out with her self-esteem. She has tears in her eyes. Keep reading.

Reviewed Rating for Kumkum Bhagya 11th November 2021 Written Update Mad Ranbir: 1/5 This rating is solely based on the opinion of the writer. You may post your own take on the show in the comment section below.