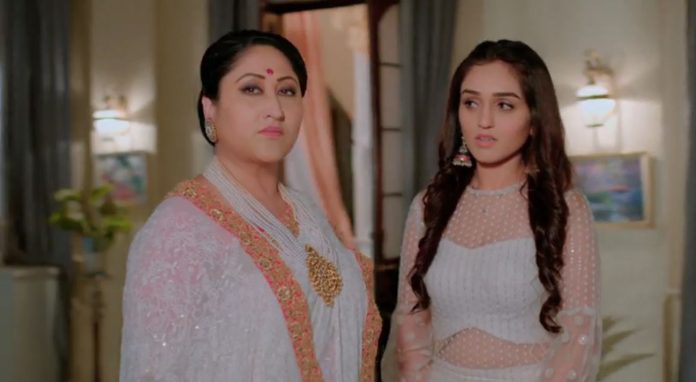 Sasural Simar Ka 12th November 2021 Written Update Reema’s revelation Aarav gets Shobha and family freed. Reema asks Shobha to let Roma sit in the front seat with Lalit. She asks them to come for a selfie, its a happy moment. She warns Shobha against hurting Roma again. She asks Shobha to remember that Roma will always have her sisters’ support. Roma leaves with Lalit and family. Reema leaves for home. Aarav tells Simar that he hopes things are fine in Shobha’s house. Simar wants them to understand that all the family members have to contribute to make a good family.

Aarav tells that their relation was perfect. Simar tells that even they have failed to make it perfect, that’s why they are separated. She thanks Aarav for helping Roma. She makes a leave, while Aarav is ready to tolerate her cold behavior. Reema wants her next move to just shaken up Oswal mansion. She goes to meet Badimaa. She shows the happy family selfie to Badimaa. Badimaa understands that Reema has solved Roma’s matter for her personal benefits. She asks Reema if she wanted her attention.

She asks Reema to come to the point. She gives just two minutes to Reema. Reema tells her that a disgusting conspiracy was plotted in her own house. Badimaa doesn’t deserve her. Reema tells that she has a proof to show her. She plays the video recording. Reema tells that she will win her faith first and then sit with her with all the rights and respect. Badimaa is shocked to hear Chitra’s conversation with Rana. Badimaa learns that Chitra had planned to attack Aarav. Reema had recorded Chitra’s phone conversation. She wants to handle Aarav later, but get Chitra punished first. Reema tells that the truth is in front of her.

She tells that she has tolerated a lot of insult to become Oswal bahu. She recalls Aarav slapping her. Reema asks Badimaa to punish Chitra, who is responsible for Vivaan’s state. She asks Badimaa to do justice, by taking the decision herself. She expects Badimaa will take the right decision. She proves her loyalty towards the family, unlike Simar, who raised questions on Badimaa’s questions. She tells that she wants to become like Gitanjali Devi.

She adds that she wants to become a responsible family person. She proves her point in less then a minute and leaves. Badimaa wants to confront Chitra. Simar misses Aarav. She realizes that someone is following her. She hides for a while. She sees Aarav. She wants him to go away. He tells that there is a big conflict between her heart and her mind. He wants to see who wins. While she imagines him, she really comes across him. He asks her is she really fighting for him. She tells that they have no relation between them now. He tells that they have a strong relation that she can’t deny.

Aarav tells Simar that his love for her is very pure, she can’t deny it even if she wants. He asks Simar to come with him. She wants to go home. He tells that he will drop her. He reminds her their promises, their nameless relation and togetherness. She tells that she didn’t forget anything, but she wants to go alone. He tells that its always better that someone walks along. She clarifies that his path will not lead him to any destination. He doesn’t care for the destination, but wants to make his journey beautiful. She agrees to go with him. Reema gets tempered seeing Vivaan hurt.

He tries to walk on his own. She hands over a knife to him. She asks him to kill her and end their relation. He wants her to stay away. She tells that he is hurt by her presence, the solution is just one that he gets rid of her. Vivaan asks her not to play a drama. He can’t get peace by hurting others. He tells that he isn’t like her. He doesn’t take her help. Badimaa meets Vivaan. She defends Reema, who has a right on him. She asks Reema to make sure that Vivaan recovers soon. She wants Vivaan to recover and then answer their enemies. She finds Aarav shattering because of Simar’s leaving.

She tells Vivaan that she will explain everything when the right time comes. She wants Vivaan to support her and encourage her. Vivaan assures that he will always stand by her. He agrees to take Reema’s help. Badimaa tells that its time to clear the termites in the house. She asks Reema to come with her. Vivaan asks Reema what magic did she do that Badimaa trusts her. Reema tells that she is doing what Badimaa wants. She thinks Badimaa will do what she/Reema wants. Aarav and Simar reminisce their happy moments. He still cares for her. Keep reading.

Reviewed Rating for Sasural Simar Ka 12th November 2021 Written Update Reema’s revelation: 4/5 This rating is solely based on the opinion of the writer. You may post your own take on the show in the comment section below.