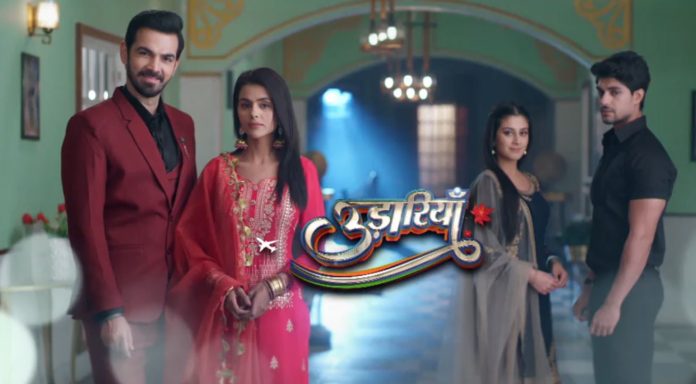 Udaariyaan 13th November 2021 Written Update News for Fateh Tejo convinces Angad for the fake marriage. She asks him to just pretend to be happy that they are in a relatoionship, when Khushbeer and Rupy come with him with the proposal. Angad agrees to help her. Khushbeer and Rupy meet him with much hope that he will agree to marry Tejo. Angad gives his consent to the alliance. Khushbeer and Rupy are assured that Angad is the right guy for Tejo. They decide to keep Angad and Tejo’s engagement on the same day and at the same place where Fateh and Jasmin are getting married. They want Tejo’s happiness.

Khushbeer returns home and tells the family that he spoke to Rupy, they decided to keep Tejo and Angad’s engagement on Fateh’s marriage day. He tells that Rupy has taken the responsibility of the engagement. Fateh and Jasmin find the family discussing about Tejo’s engagement. They both didn’t expect this to happen so soon. Nimmo passes a taunt on Jasmin that Tejo will be stealing the limelight on her wedding day, because Tejo is getting engaged at the same place. She tells that Jasmin won’t be shining in her marriage, the real couple Tejo and Angad will be the shining. How will Fateh and Jasmin accept this news? Keep reading.

Angad agrees to help Tejo with the fake marriage. He feels Tejo is like a Devi, who ends the sorrows of the people. He tells her that he is serious, he understood it and didn’t like her sacrifice. Tejo tells that she can’t see her family hurt. Angad reminds her that Fateh and Jasmin have snatched her happiness and played with her emotions. He tells that he knows her well. She realizes that he knows her feelings. She tells him that she wants to tolerate all the pain to give a smile to others. She believes that Fateh and Jasmin can’t start their new life without the elders’ blessings.

She is ready to play a little drama to convince the elders to bless them. Angad asks her how will she end the drama later. She tells that they will get engaged, and then they will tell the elders that they aren’t compatible. He finds her clever to plan everything till the end. She tells that its his wish to help her. He tells that the plan is good, but risky, he can say yes to her elders and then not refuse, he can really marry her. He asks her what will she do then. Tejo tells that she likes his acting.

She asks him to convince her elders for her sake. She thinks his question was just a joke. He really means it. Khushbeer and Rupy meet Angad at his house. Angad serves them his special lassi. They tell him that they have come to talk about an alliance. Angad asks them to come to the point, he is feeling tense hearing them further. Khushbeer and Rupy tell him that they have got Tejo’s alliance for him. Angad accepts the alliance. He asks them to bless him, instead requesting him. He tells that Tejo is a diamond, he is a smart businessman and can’t refuse to her. He pleases Khushbeer and Rupy with his sweet talks.

Gurpreet is disturbed with the thought of Tejo’s marriage. She falls down. Fateh and Mahi rush to help her. They ask her where is her focus. Mahi asks her where had she been. Gurpreet hides the truth from them. She wishes Angad to give all the happiness to Tejo. Tejo wants to know Angad’s answer. Khushbeer and Rupy come home. Tejo and family ask them about Angad’s reply. Khushbeer tells that they tried hard, but Angad didn’t agree. Tejo thinks Angad doesn’t want to help her. She adds that she is really happy, even if Angad refused to the alliance.

Khushbeer and Rupy laugh and break the good news that Angad has agreed for the alliance. Tejo is glad that Fateh’s marriage won’t have any problem now. Jasmin and Fateh get into an argument about the marriage. He tells that he is planning a surprise for her. Fateh learns about Angad’s engagement. He wonders if Angad is getting engaged to Tejo. He doesn’t want this to happen. Virks miss Tejo and cry for her. They wish Tejo could stay with them forever. Mahi refuses to accept Jasmin as her Bhabhi. Khushbeer finds them upset. He tells that she will keep visiting them as their daughter. He hides his tears.

Gurpreet asks him why is he crying when he wanted Tejo to remarry. He tells that he doesn’t want Tejo’s life to stop because of Fateh. He adds that they will soon prepare for Tejo and Angad’s engagement. Fateh and Jasmin overhear their discussion. Khushbeer tells that they have to heal Tejo’s wounds, given by Fateh. Nimmo asks him to give the good news to Fateh and Jasmin also. She tells Jasmin that Tejo is getting engaged to Angad on the same day, they will shine at the same venue. Gurpreet tells that they will be attending their marriage. Fateh is glad to know this.

Simran tells him that it was Tejo’s condition that she will get engaged if they all attend her marriage. The family tells him that Tejo still thinks good for him. Jasmin tells that they have booked a banquet hall. Khushbeer tells that they won’t come if they choose to keep their marriage somewhere else. Fateh tells that he is glad that his family is coming, and Jasmin is also happy that her family would come to bless her. Jasmin vents anger. She realizes if Tejo wants to snatch Fateh from the mandap. She gets insecure. Fateh meets Angad and congratulates him for the engagement.

Angad tells that he is feeling bad that Tejo was Fateh’s wife before. Fateh replies that he is happy that Tejo chose a good life partner. Angad tells that his eyes have the pain oflosing something. Fateh adds that he has lost his best friend, that’s the only regret. Angad asks him to be happy that he has Jasmin in his life, he can share everything with her. Angad feels Fateh still has something in his heart. Rajat tells Tejo that he is happy for Angad and her. Fateh meets Tejo to congratulate her. He recalls their marriage and feels disheartened. Stay tuned.

Reviewed Rating for Udaariyaan 13th November 2021 Written Update News for Fateh: 3/5 This rating is solely based on the opinion of the writer. You may post your own take on the show in the comment section below.