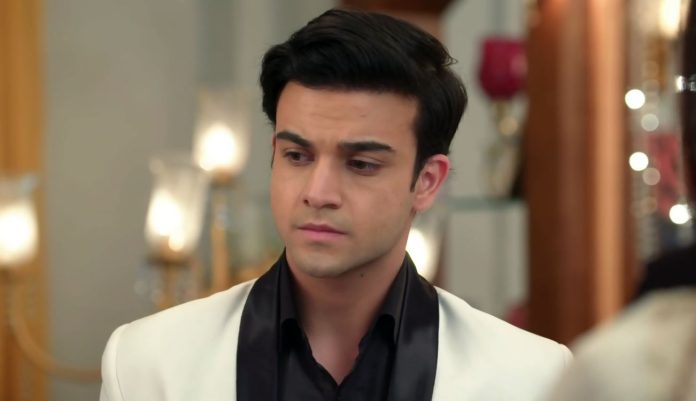 Kumkum Bhagya 27th December 2021 Written Update Ranbir’s test Dida tells Pallavi that Prachi will create a scene in the party, because Prachi is Ranbir’s real wife. Pallavi asks Dida to let Prachi do anything out of desperation. She doesn’t care for Prachi. Dida tells that they shall not make this party of Rhea and Ranbir’s reception, else Prachi will not like it. Pallavi tells that she is waiting for Prachi’s drama. She tells that Prachi has come to trouble her, and now they will trouble her. Ranbir is in a dilemma over Prachi’s feelings for him. He wants to hear from her that she still loves him, because he still loves her. He wishes that she takes one step towards him, then he will whole heartedly accept her.

Pallavi goes to announce the blindfold game to know true love, where the husbands will participate, get blindfolded and then identify their wives. She tells that the husband who finds his wife in the crowd will be the winner. She tries to bring Rhea closer to Ranbir. Rhea gets madly happy, while Prachi stands expressionless. Still, Ranbir identifies Prachi as his wife. Rhea plans to provoke Prachi and make her sign the guilt admittance papers. Will Prachi know Ranbir’s innocence in the hotel incident and understand Rhea’s plans? Keep reading.

Earlier in the show, Pallavi introduces Ranbir and Rhea as a couple. She tells that its Ranbir and Rhea’s wedding reception. Ranbir makes a phone call excuse and goes away to Prachi. She asks him why did he leave the reception party. He asks did she know it, he didn’t know it. She asks would he cancel the party if he knew it. He tells that he would have not cancelled it.

Pallavi gets angry on Prachi who is misbehaving so much. Prachi tells that she isn’t the old Prachi now, she believed that Pallavi is like her mum, but Pallavi isn’t a good person, Pallavi proved that she isn’t a mum, she favors her own happiness more than her son’s happiness. Pallavi asks her to stop it. She tells that its her mistake to tolerate Prachi. She asks Prachi not to do any drama in Ranbir and Rhea’s reception. Prachi tells that she is trying to know if a person gets blind in love or hatred. She asks Pallavi how can she call her fight for right a drama.

She taunts that Pallavi can’t see the difference between right and wrong. She asks Pallavi is she happy to see this drama. She tells that she has tolerated everything and did right with everyone, she had let them do wrong with her, but now she understood that Pallavi will never accept her. She adds that she will not get cheated and insulted, she will just get her rights. She tells that she knows respecting elders, but she won’t stay silent, she will raise a voice against the wrong. She doesn’t care if her raised voice insults the family in front of the society. She threatens Pallavi. She asks Dida how did she like it. Dida tells that she loved it. She is really happy to see the new Prachi.

Aaliya tells Rhea that she has prepared the chits for the game round. A guest gets choked by the paneer starters. Rhea and Aaliya get worried for her. They call Pallavi to handle the matter. Pallavi tries to help. Aaliya tells that the lady is choking. Vikram calls the doctor. Rhea asks the lady to drink water. Dida asks them to help the lady first. Prachi helps the lady by pushing her back and saves her from choking. She proves that she is the sensible person in the family. The guests praise Prachi for her smartness.

Rhea gets angered seeing Prachi winning the praise. The lady thanks Prachi for saving her life. The guests tell that Prachi didn’t panic and took the right step, unlike everyone. Prachi asks them to enjoy the party. Pallavi thanks Prachi. Dida scolds Rhea for getting such bad catering service. Shahana reaches Kohli house and calls Ranbir. He asks her to skip the party and just come to his room for the meet. Prachi sees her and follows. Shahana asks Ranbir what did he wish to tell her. She tells that she never saw him so upset. She asks what happened between Ranbir and Prachi, when they both loved each other so much.

She asks what is happening. Ranbir tells her that he will tell her everything that broke Prachi and her relation. He asks her to decide who is right and who is wrong. He tells her about catching Prachi with Siddharth in the hotel room. Shahana loses her temper knowing he had doubted Prachi. She calls him a big fool. She tells that she hates him for his foolishness. He asks her what is she saying. She tells that he should have spoken to Prachi and heard her side of story, then they would have been together. He asks her if she trusts Prachi. She asks him doesn’t he trust his wife.

He asks her what would she do if this happened with her. She tells that Prachi isn’t characterless, he never understood Prachi and that’s why he is regretting now. She tells that he will reap what he sows. She goes to Prachi and hugs her. She asks Prachi why didn’t she tell her the past incident. She tells her that Ranbir told her everything. Prachi shares her tears and sorrow with Shahana. Ranbir looks at them. Prachi asks Shahana to come with her. Dida tells Pallavi that she needs to talk to her. She asks Pallavi not to announce Ranbir and Rhea’s reception in the party, else Prachi will not tolerate it. Pallavi asks Dida to let Prachi react, Prachi will leave the party and go away.

Prachi asks Ranbir did he change his mind. Ranbir tells that its not important. He asks her not to expect anything from him. He wants her to accept her fault. He tells that she didn’t want him to contact her. Rhea asks Ranbir to come with her. Ranbir goes with Rhea. Pallavi tells the guests about the blindfold game. She is super excited. She tells that they will blindfold the husbands, and then make them lookout for their wives, the winning couple will get the best couple award. Keep reading.

Reviewed Rating for Kumkum Bhagya 27th December 2021 Written Update Ranbir’s test: 3/5 This rating is solely based on the opinion of the writer. You may post your own take on the show in the comment section below.