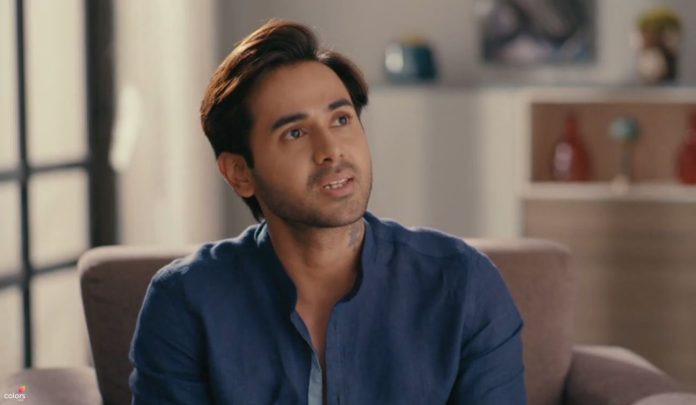 Balika Vadhu 17th January 2022 Written Update Divorce battle Kiara wishes Anandi “All the best” for her child marriage annulment case’s first hearing. Anandi thanks Kiara and requests her to submit her assignment in college. Kiara agrees and tells Anandi that she wished to go with her. Anandi eats Dahi Shakar before leaving for the court. She tells Kiara that her mother taught her to eat “Dahi Shakar” before leaving for good work. Kanak hears Jigar talking about some plan with someone on call. She immediately calls Anand to tell him about it. Kanak requests Anand to take care of Anandi. Anand disconnects the call assuring Kanak.

Anandi takes a taxi to the court. Later on Anandi finds that her taxi driver is none other than Jigar’s friend “Pinkesh”. She fights with Pinkesh in the taxi to escape. Pinkesh stops the car somewhere. Anandi throws pepper spray in his eyes and runs away. Jigar stops and grabs Anandi in her way. He asks Pinkesh to take out his and Anandi’s child marriage photograph from Anandi’s bag. Anandi with her intelligence escapes both of them. Pinkesh and Jigar follow Anandi. Anandi hits Pinkesh anr runs. Jigar grabs Anandi again. He hits and pushes Anandi on the floor. Before Jigar can grab proof against him from Anandi, Anandi grabs him with her dupatta.

Sejal and Premji wait for Jigar. Kanak calls and tells Anandil that according to Sejal, Jigar and Anandi didn’t reach court. Usha feels irritated waiting for Anandi. Jigar and Pinkesh reach the court. Premji asks Jigar if he did anything with Anandi. Jigar asks Premji not to worry. Usha requests the judge to wait for her client. Everyone at court waits for Anandi. Jigar’s lawyer speaks against Anandi and asks the judge to give her a decision. Before the Judge can postpone the court hearing of Anandi’s case, Anandi arrives. Anandi comes and tells the Judge whatever Jigar and his friend Pinkesh did with her. Jigar refuses Anandi’s allegations.

Judge refuses to hear Anandi’s pleas. She tells Anandi that the world cannot work according to her. Anandi tells the Judge that her whole life didn’t work according to her. She tells the judge she got married at the age of 8 months. Anandi cries and tells the Judge that she wants all the rights that an 18 year old girl should have in her own life. She requests the Judge to not postpone her case hearing saying that it may break her confidence. Flashback’s of Anandi and Jigar’s child marriage are shown. Judge gets convinced to hear Anandi’s case. The case hearing starts. Jigar’s lawyer tells the judge that Anandi and Jigar’s marriage happened on Anandi’s 18th birthday.

Flashback shows that Jigar and Pinkesh changed the marriage photograph by their cleverness. Tears gleam in Anandi’s eyes when she shows the photographs in her hands to her lawyer Usha. Usha sees the photographs in which Jigar wrote just joking. Jigar’s lawyer and Judge asks Usha and Anandi to not waste the court’s time. Judge’s employee takes the photographs from Usha and gives them to the judge. Judge gets angry seeing the photograph and scolds Anandi for again and again making fun of the court. She also scolds Usha for her carelessness. Usha seeks apology from the Judge and asks her for another date for Anandi’s case. Judge gives another date for Anandi’s case telling Usha that she did this seeing her past record.

Usha leaves giving an angry glare to crying Anandi. Anand comes and sees Anandi crying. He gets more worried for Anandi seeing her injured. Jigar asks Anandi if she thinks that she will get free from him so easily. He tells her that he will never let her get free from their marriage. Anandi asks Jigar to do anything saying that she will not accept defeat. Anandi looks at Jigar angrily. In the next episode, Usha will tell Anandi that this is another level. She will tell Anandi that it seems that Jigar can stoop to any level to defeat her. Anandi will ask Usha if there is any way to make her case strong and defeat Jigar. Usha will tell Anandi that there is a way. She will ask Anandi if she can find out people who attended her marriage. She will further ask Anandi if there is anyone who can testify to her claims in court. Anandi will get thinking.

Reviewed Rating for Balika Vadhu 17th January 2022 Written Update Divorce battle: 3/5 This rating is solely based on the opinion of the writer. You may post your own take on the show in the comment section below.