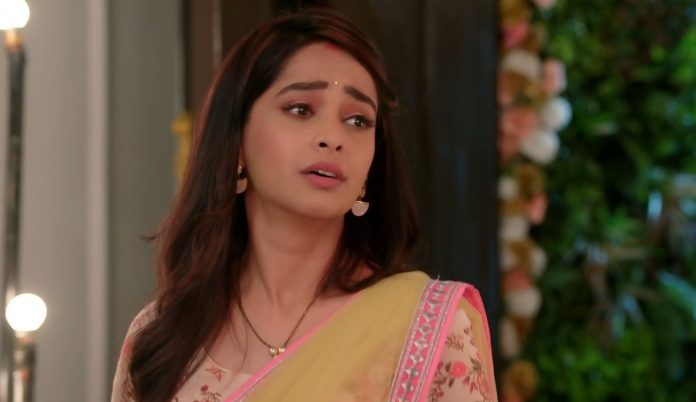 She tells that its Rhea’s first Lohri, she shouldn’t see Prachi back. Dida tells that Rhea will know it from Ranbir when he comes home and tells that he has gone to help Prachi. She asks Pallavi not to keep Rhea happy all the time. She wants Pallavi to think of others. Pallavi tells that if Rhea’s mood spoils, then it will affect the festival. Dida asks why didn’t she think of the festival before getting Prachi arrested. She tells that Pallavi didn’t even think of her son’s emotions, like she is worried for Rhea. Pallavi doesn’t want to argue with Dida. She asks Vikram to explain Dida. She can’t keep everyone happy.

Dida tells that one can’t keep everyone happy, else they can’t keep anyone happy. Aaliya worries that Vikram isn’t supporting Pallavi. She fears that Prachi might come home on the Lohri day and the festival can turn into a battle. How will Prachi’s entry back in the Kohli house spoil the Lohri for the family? Will Ranbir realize Prachi’s pregnancy truth? Keep reading.

Ranbir tells Prachi that she has no heart or feelings left, she doesn’t even have manners, she just have hatred in her heart. He tells that he feels like hitting his head on some stone. Prachi asks him to stop it. Shahana asks them to end the argument. He tells that he tolerates Prachi’s indifference every day, he wants to solve her problems, but she blames him for the problems. Prachi tells that he is responsible for all the problems, he really deserves such a bad treatment. She doesn’t want his care and love, knowing its all fake. He is hurt by her words. He tells that they will write a new chapter now, he will go away from her, he will never come in her sight, she will not see him and his love. He leaves from her sight.

He scolds the family for neglecting him. Prachi asks him to talk to her. He asks if she will talk to him when she dislikes it. He tells that he will not fight with her, he has to fight with Rhea first. He asks Rhea why did she marry him. Aaliya interrupts him. She asks him why is he asking strange things. He asks does she find these things normal. He goes mad in anger. He tells that the family isn’t his family anymore, they always keep fighting, they have no love. He is sick and tired of their fights. He apologizes that he can’t support them in these fights. Prachi tells that she never saw him supported her. He tells that she can’t see him, he is a superhero who helps everyone, but can’t be seen.

Rhea stops him from talking to Prachi. Shahana comes in. Ranbir asks her to go to the room, because the drama will go on for long. Rhea asks why would Shahana stay in the house. He tells that its his decision that Shahana will stay in their house, he has some value as well, he is Ranbir Kohli, Shahana needs them in Sarita’s absence. Shahana asks him not to overreact. He tells that he left his work and came to help Prachi. Rhea asks him did he bail out Prachi. He tells that he bailed out Prachi.

She gets angry on him. He asks her to thank him. He asks where is her joy now, did her joy turn into anger because of Prachi. He feels troubled by Rhea and Prachi. He asks Dida to see how the things are changing in the house. He tells that the family depends on the two sisters’ mood. Vikram calls it enough. Ranbir asks them to react when Prachi and Rhea fight. He tells that the sisters always fight and take revenge.

He tells them that he doesn’t want to live in the house, everyone wants something, Rhea wants her married life, Prachi wants her rights, but nobody asked him what he wants. He tells that Pallavi doesn’t know about his likes, because her focus is on Rhea, not her son. He tells that he really wants to go somewhere far from the family, who just worry for Rhea. He asks them do they not have own conscience. He tells that his life is complicated, but he never fought with them to vent out frustration, he doesn’t talk in between, because he loses because of their fights. He asks them how long will this fight go on.

He tells that he is getting troubled because of Rhea and Prachi. He asks Prachi what did she get till now, Rhea and Prachi are hitting each other with their odd plans. He counts their mistakes. He asks Rhea why did she call the police, knowing that a third person shouldn’t get involved in the family fights. He asks Vikram and Pallavi why didn’t they stop Prachi’s arrest. He tells that Rhea has crossed all limits, Rhea has sent Prachi to jail and out the family respect at stake. He tells that Rhea has ruined their family respect, not just Prachi got defamed, but also the entire family.

He asks Pallavi why didn’t she inform him about Prachi’s arrest, did she just think of Rhea, is Rhea more important than the family. He asks why didn’t they help Prachi. Prachi tells that she doesn’t want any help. He asks her not to give herself any importance, he is arguing about his family respect, not her. He requests the family not to put the family respect at stake because of Rhea and Prachi. He puts an end to his long speech. He tells that he is going out to have some fresh air, because he can’t breathe in the hatred filled house. He asks Dida to help Shahana settle in the guest room. He makes a leave.

Dida asks Prachi to go to her room and rest. Pallavi feels sorry for Ranbir. Rhea asks is she the reason for Ranbir’s anger. Vikram tells that they have crossed their limits by getting Prachi arrested, Ranbir was right, Rhea has done wrong this time, and even they did wrong. He feels ashamed. Rhea asks Pallavi will she say the same. Pallavi tells that Ranbir said the right thing, their family respect was at stake. Rhea wants to clearly tell them that she is their Bahu. She thinks to prove herself as Ranbir’s wife. Shahana dances happily that Ranbir has scolded Rhea so much.

Prachi thinks of Ranbir’s words. Rhea meets her. Prachi tells her that Ranbir got her freed from the jail and got her home. She calls Rhea a big fool. Rhea asks her to keep the room, she doesn’t care because Ranbir isn’t with Prachi. Prachi tells that she doesn’t want Ranbir to be with her. Rhea doesn’t understand what Prachi wants. Prachi tells that everyone understood Rhea’s motives. Keep reading.

Reviewed Rating for Kumkum Bhagya 20th January 2022 Written Update Prachi’s entry: 3/5 This rating is solely based on the opinion of the writer. You may post your own take on the show in the comment section below.