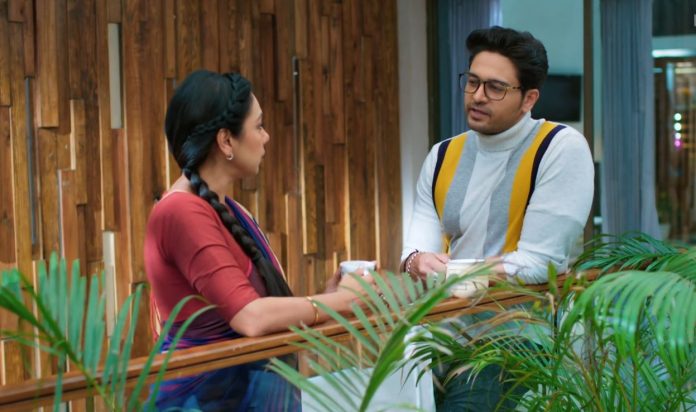 Anupama 25th January 2022 Written Update Sticky wicket Nandini requests Samar to make sure that Vanraj doesn’t scream at Kavya. Samar asks Nandini to stop Kavya for that. Nandini asks him how to stop Kavya as she isn’t saying anything wrong. Samar asks Nandini to let Kavya say anything if she seems right to her. Nandini tells Samar that Kavya is right but her way of expressing herself is wrong. Pakhi feels irritated with the drama. Kavya tells Vanraj that she won’t let anyone be happy if she stays unhappy, especially him. She threatens Vanraj to make his life miserable. Kavya keeps on scolding Vanraj.

Vanraj loses his temper, pushes the kite table in anger and leaves. Kavya asks Vanraj to leave after completing their conversation. She shouts and tells Vanraj that she can get angry too. Angry Kavya throws the kites and leaves wishing everyone “Happy Makar Sankranti” to everyone. Anupama feels angry thinking that Kavya and Vanraj don’t care for the family’s happiness. Kavya follows Vanraj but the latter doesn’t stop and leaves. She warns Vanraj that she will see him at home. Vanraj is seen sitting hidden behind a car. He feels frustrated thinking where he got stuck.

On the other hand, Bapuji apologizes to GK for making him and his family see all his family drama. Baa and Bapuji blame Vanraj and Kavya for making them unhappy with their fight. Baa apologizes to Anupama for always making her see and handle their family’s fights. Anupama and Anuj request Baa to not apologize to them. Anuj tells Baa that they have equal rights in her troubles.

He tells Baa that they would get angry if she snatches this right from them. Anuj makes Baa and Bapuji drink water. Everyone feels emotional with Anuj’s sweet gesture. Anuj says an emotional shayari for Baa, Bapuji and Anupama explaining the consequences of hiding pain. Anupama asks Kinjal and Paritosh to take everyone home.

Everyone except Anuj and Anupama leaves for home. On the other hand, Kavya enters her room angrily. She feels frustrated thinking that no one cares for her like they care for Anupama. Kavya thinks no one values her in Shah house as they were celebrating the festival without her. She thinks how could Shahs insult Nandini (her niece) in her absence. Kavya thinks now everyone will have to value her as she is back. Outside the house, Samar asks Nandini to understand that Kavya vented out her anger in front of everyone instead of talking to Vanraj separately. He tells Nandini that Kavya is making everyone far from herself because of her actions. Samar tells Nandini that because of this reason Kavya doesn’t seem right even being right.

On another side, Anupama cries feeling bad for her family and children. Anuj brings a beautiful family sketched kite for Anupama. Anupama recalls that it’s the similar sketch she made earlier. Anuj explains to Anupama that only hope flies in the sky. He reminds Anupama that she never loses hope. Anuj asks Anupama to fly the kite taking God’s name. He says that God will never let her family’s happiness kite get cut. Anupama gets teary eyed with Anuj’s another sweet gesture. She takes the kite and draws Anuj, GK and Malvika with her family on it. Anupama tells Anuj that her family is her heart. She makes Anuj happy by telling him that she doesn’t do any work with half heart. Anupama says happiness is real when the whole family is involved in it.

She says anger troubles the angry person only. Anupama says she will fly the kite very high without any anger, tears and hate. Anuj helps Anupama fly her family kite. He tells Anupama that soon the happiness kite would fly higher than this with God’s grace. Anupama feels tense thinking how will she handle Kavya, Vanraj and Malvika together. Vanraj recalls Kavya’s scoldings, warnings and threats. At Kapadia house, Anupama tells Anuj that she asked Bapuji to try handling Kavya. Anuj asks Anupama if he can say something to her which may prick her. Anupama says yes. Anuj tells Anupama that she can try to solve Vanraj and Kavya’s problem but cannot really end it.

Malvika says she could have blamed only men for issues in every relationship. She tells Anuj and Anupama that after their advice, she decided to hear and understand both sides of the story, if any situation of this type arises. Malvika says she finds Kavya at fault in Vanraj and Kavya’s relationship. She uses an instance and explains to Anupama and Anuj that even the doctor cuts the organ from the body if it doesn’t work. Malvika says similar things should happen in relationships . She says that a person should end a relationship, if he/she doesn’t find happiness in it. Anupama explains to Malvika that the doctor cuts the non working organ only after making all efforts to save it.

He asks how the problem will get solved when both Kavya and Vanraj aren’t talking to each other. Malvika says the way Kavya created a drama instead of talking, anyone would get angry like Vanraj. Anuj and Anupama explain to Malvika that anger is not a solution but an issue itself. Malvika says she agrees but says that Kavya is the reason behind Vanraj’s anger. She tells Anuj that blaming and judging Vanraj is wrong. Anuj tells Malvika that he is just making his point clear, not blaming or judging Vanraj. He explains to Malvika that a person should think about his or her partner too in any relationship. Anuj says the problem here is that Vanraj only thinks about himself.

Malvika tells Anuj and Anupama that it’s no use to talk about anything if they made Vanraj wrong in their brain. She finally tells Anuj and Anupama that she will always support Vanraj because he is right according to her. Malvika leaves Anupama tense. Anuj asks Anupama what happened. Anupama says nothing. Anuj advises Anupama to draw a line between her and Vanraj’s issues. He tells her that this way she may always get caught in between Vanraj-Kavya and their life. Anuj reminds Anupama that she already has many responsibilities like Pakhi, Samar and Nandini.

Kavya shouts and says that Vanraj married her after his divorce with Anupama. She reminds Nandini that she too felt bad when Samar asked her to break their only 1 year relationship. Kavya says that it’s easy to talk about self respect. She further says only the woman whose marriage is breaking can understand this pain. Kavya asks Nandini how can Vanraj take the separation decision alone, when they decided to be in a relationship together. Kavya says she won’t become second Anupama. Nandini tells Kavya that Vanraj wants to get separated from her not because of Malvika but because he has got genuinely irritated with her. She reminds Kavya that Vanraj asked her for divorce before Malvika’s entry.

Nandini requests Kavya to return to the US with her as they seriously need a break. She further tells Kavya that they would peacefully decide about their future in her mother’s house in the US. Nandini tells Kavya that they saw many fights, put in a lot of effort and tolerated insults a lot. She requests Kavya to return to the US with her. Kavya asks Nandini how they will live without Vanraj and Samar respectively. Nandini says she will learn as life teaches everything. She says she learnt to stay without her father and live without Rohan then she will also learn to live without Samar. Anupama overhears Nandini and Kavya’s conversation and gets shocked.

In the next episode, Anupama will ask Kavya and Nandini to leave by taking answers to all their questions and with their eyes and head held high. Kavya requests Anupama to help her become old Kavya. This will shock Nandini and Anupama. On the other hand, an angry Vanraj will say that Anupama did very wrong.

Reviewed Rating for Anupama 25th January 2022 Written Update Sticky wicket: 5/5 This rating is solely based on the opinion of the writer. You may post your own take on the show in the comment section below.