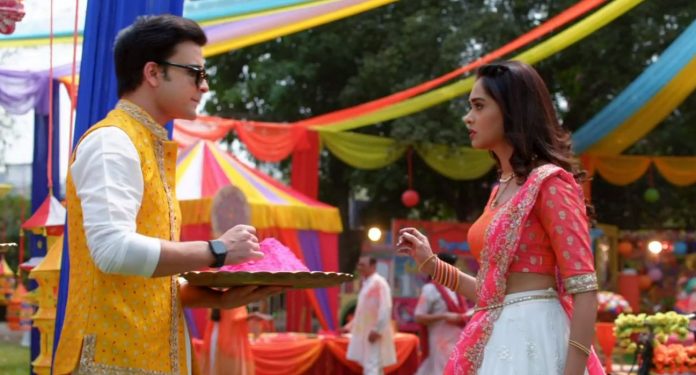 Kumkum Bhagya 13th March 2022 Written Update Ranbir confronted Shahana wishes everyone happy Holi. She meets Prachi who is in pain. She asks if she should call a doctor. Prachi asks for water. She wants to take her medicines. Kohlis also wish each other happy Holi. Vikram tells them that their Kohli holi party will be in every newspaper. He asks Ranbir not to work on the festive day. Ranbir meets the family and is very happy. He wishes them. He tells that he wasn’t working, but was checking the guests lists on the holi event. He tells about the Oberois and special guests coming. Ranbir waits for Prachi. Prachi calls up the doctor. She tells about her breathing problem and stomach pain. Doctor suggests her to not take stress. She tells that Prachi should laugh and stay happy even in stress.

She asks Prachi to avoid the complications. She advises Prachi to avoid Holi colours also. She tells that just organic colours should be used. Prachi thanks her. Prachi doesn’t know how will she refuse to people when they come to apply Holi. She doesn’t want to take any risk with her baby. Dida wishes them happy Holi. Prachi refuses to play Holi. Prachi joins the Happy Holi event for the sake of her baby, to stay happy. Pallavi wishes Rhea. Rhea acts shy and blushing. She tells that she wanted to play holi with Ranbir first. Pallavi wishes her happiness. Prachi thinks to leave and avoid colours.

She doesn’t want Ranbir and Rhea know about her pregnancy. She recalls Ranbir and Rhea’s intimacy. She wanted to tell him about their baby, but now she thinks he doesn’t deserve it. Ranbir comes in her way to apply her colours. She changes her path and avoids him in anger. She doesn’t want to talk to him. Ranbir asks her not to be so rude. She asks him to stay happy with Rhea. She suggests that he finds happiness in Rhea. She warns him to stay away. Ranbir wants to convince Prachi. He can’t tolerate her silence and annoyance.

Dida asks Shahana why is Prachi avoiding Holi when she loves Holi a lot. She finds Prachi really tensed. She asks Shahana if Prachi is hiding some fear. Shahana knows the reason. She thinks to get organic colours for Prachi and make her play. She drops the holi colours down and pretends to get hurt. She apologizes to Kohlis that the colours fell down by mistake. Pallavi asks her how will they play Holi. Rhea and Aaliya also scold Shahana. Ranbir tells that he will get fresh colours. Aaliya asks Shahana to go and get colours. Shahana tells that she is ready to go. Ranbir asks Rhea to relax. He assists Shahana.

Prachi handles the arrangements in the house. Ranbir meets her and reminds their last Holi. She tells him that he had a right on her before, but now she has taken all the rights back. She denies to love him. He tells that he loves him, her love hurts him and also gives him the right. She asks him to go to Rhea. He tells that Prachi is his wife. He doesn’t care what she thinks. He tells that he is just adamant for Prachi. He wants to play the first colours of the Holi with her. Prachi cries. Aaliya keeps an eye on them. Shahana buys the organic colours. She gets teased by a man. Lakshmi intervenes and slaps the man.

She lectures the man and makes him apologize. She saves Shahana. Shahana invites him to the Holi party. Kohlis meet Oberois and welcomes them. Ranbir loves fun loving Ayush. Rhea introduces herself as Ranbir’s wife Rhea Kohli. Prachi appears there. Ayush asks about her. Rhea doesn’t let Prachi answer. Shahana asks Prachi to meet Lakshmi. The man follows them to the house. Rhea is angry seeing Ranbir going mad for Prachi and playing holi with her. Ranbir and Prachi perform in the party.

Reviewed Rating for Kumkum Bhagya 13th March 2022 Written Update Ranbir confronted: 3/5 This rating is solely based on the opinion of the writer. You may post your own take on the show in the comment section below.