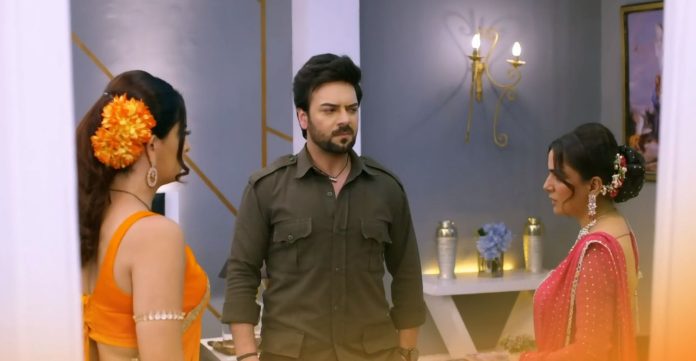 Kundali Bhagya 14th March 2022 Written Update Preeta fights back Karan accuses Preeta for putting Mahesh into trouble by organizing the party against his wish. He begs her to spare his family and not involve his family in her revenge. He tells that he loves his family a lot, he is foolish that he doesn’t express it to the family. He tells Preeta that he started playing ball to fight his loneliness and get attention from the family. He adds that he has done everything for his family. He doesn’t permit anyone to snatch their happiness. He feels that she has changed so much for the sake of money and power. He asks her if money is so important that she broke relations and snatched their happiness. He feels she is not the same Preeta, she has become too greedy. Preeta gets heartbroken.

Rakhi still defends Preeta. Bani rebukes her for her adamancy. She asks Rakhi to not trust Preeta. Sameer tells that Mahesh was happy when he came in the family and even they were happy. Kritika tells that Preeta used Rakhi’s emotions and got Mahesh out of the basement, she had played with their emotions and proved Mahesh insane again. Kareena cries for Rakhi. She tells that she was afraid seeing Rakhi in danger. Rakhi tells that they had seen Mahesh holding her neck, but he was actually saving her, he was removing the snake from her neck, she couldn’t understand what was happening, his motive was to save her life. Kareena apologizes that she didn’t think well. Kritika tells that it was Preeta’s gameplan to get them insulted and then put the blame of foolishness on them.

Prithvi and Sherlyn dance in the room and celebrate their victory. Preeta watches them. They see Preeta standing at the doorstep. Preeta enters the room and challenges them. She tells that she will oust Prithvi from the house, and Sherlyn as well. She adds that she will throw out Sherlyn in a way that the latter never finds a way to return home. She throws a new challenge at Prithvi and Sherlyn. While Prithvi is in his joyous zone and doesn’t care for the shallow threatening, Sherlyn gets worried on being exposed in front of Preeta.

Bani tells Kritika that Preeta has given them the wounds again. Kritika tells that Preeta is smart, she called the judge intentionally in the party to prove Mahesh unstable, she satisfied her ego and had hurt him. Preeta hears the talks and breaks down. Kritika tells that Mahesh was trusting Preeta and calling her his doctor, he loves her, but she did wrong with him, she broke his trust and landed him in the basement again. Sameer sees Preeta crying. Preeta runs to Mahesh and sees him. She sheds tears. She feels she had tried to bring him to the party, but she failed again, she couldn’t do anything for him. She feels he had expected a lot from her, but she failed and couldn’t save him, she broke all his hopes.

She couldn’t save him from Prithvi, who wants Mahesh to stay in the basement. She feels Prithvi has won and she couldn’t do anything. She thinks someone is helping Prithvi. She cries profusely blaming herself for Mahesh’s state. Sameer overhears her and comes to console her. Preeta hides her tears. He tells that she can hide her tears, but he has already overheard her emotions for Mahesh, she has come to help the family, she still loves them. Preeta tells that she failed in doing good. He calls her brave to stand for the right. He promises to always support her.

He tells her that he trusts her, she can win everyone’s heart again. She tells that she isn’t winning anyone’s heart, she isn’t giving them the happiness, she wants to do good, but the family regards her an enemy. Shrishti finds Sameer consoling Preeta. She rushes to Preeta and encourages her. She tells that sometimes they have to fight the family for the sake of the family. She tells that Karan and his family will believe her one day. She asks Preeta to fight and not lose heart. She makes Preeta promise. Preeta promises that she will fight and not lose until the battle ends in their favour.

Reviewed Rating for Kundali Bhagya 14th March 2022 Written Update Preeta fights back: 4/5 This rating is solely based on the opinion of the writer. You may post your own take on the show in the comment section below.