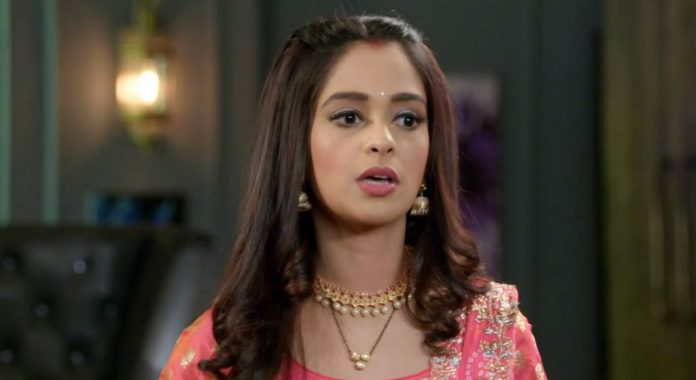 Kumkum Bhagya 14th March 2022 Written Update Prachi in danger Rhea tells Aaliya that she has seen Ranbir falling for Prachi again. She vents her anger. She doesn’t want to know why Ranbir loves Prachi so much. Aaliya asks her to calm down. She cries on seeing Rhea in so much pain. Rhea tells that she had spent a night with Ranbir and made it look like they got intimate, even then Ranbir treats her so badly like she is a mistake. She tells that Ranbir is insulting her by his rude behavior. Rhea wants to calm her anger by making Prachi cry. Vikram meets Pallavi and finds her upset. He asks her what is the matter.

She tells that their problems will never end, Prachi is the reason for their problems. She asks him to stop pretending innocent and happy. He asks her to allow him to stay happy. She blames Prachi. He tells that life isn’t perfect, they should find happiness. She doesn’t want to be ignorant like him. He tells that she is killing his happiness too. Dida also lectures Pallavi. She tells that Ranbir also played Holi with Prachi by her wish, Prachi can’t be blame always.

She asks Pallavi not to become wrong like Rhea. Pallavi knows that Kohlis can’t be united until Prahi is with them. Aaliya gets harmful colours for Prachi. She tells Rhea that the chemical colours will damage Prachi’s face. She asks Rhea to take her revenge, Prachi’s face will get burnt forever. Rhea wants Prachi to suffer. She doesn’t want Prachi to look at her own face. Aaliya asks her to wear the gloves and apply it to Prachi’s face. Rhea wears the gloves and takes the colours packet. Prachi falls in danger again.

Rhea follows Prachi to her room. She wishes that she was her dad’s only daughter, that Prachi was never born. Prachi tells that wishes don’t get fulfilled, Rhea has poison on her mind. She gets a headache because of Rhea’s shouting. Rhea cries and blames Prachi for hurting her. She tells that she loves Ranbir a lot. Prachi asks her to decide if she is her sister or Sautan. Rhea calls her wrong. She yells at Prachi. Prachi asks Rhea not to see her if her sight boils Rhea’s blood. Rhea warns her to stay away from Ranbir. Prachi tells that she didn’t tie Ranbir to her. She asks Rhea to not stop her, but control Ranbir. She knows Rhea so well.

She tells that she knows Rhea’s hidden agendas and also her plotting. She asks how dare Rhea announces about her pregnancy and insult her, when she wasn’t sure of it. She tells that Rhea can also become pregnant one day, she shouldn’t make fun of some other woman. She reminds Rhea what she did. She further lectures Rhea for criticizing her and making fun of her character. Rhea doesn’t care if Prachi forgives her or not. She tells that Ranbir and she has got too intimate now, Prachi can never go close to him now. Prachi asks her not to be insecure then.

She advises Rhea to stop her so called husband. Prachi sends away Rhea. She cries recalling Ranbir and Rhea’s intimacy. She feels Ranbir has broken her heart, love is just an illusion, trust is imaginary, and just the cheat is the truth. She doesn’t want to cry for Ranbir. She wants to end everything that existed between them. She tells that he didn’t trust her and didn’t keep any promise, all his promises were fake. She breaks down. Rhea is also affected recalling Prachi’s words. She screams and breaks things. Even Rhea breaks down. Aaliya comes to shoulder her. She asks Rhea why is she crying. She consoles Rhea. She asks Rhea not to do any drama on a festive day. Rhea tells that Ranbir isn’t playing holi with her. Aaliya takes her to the room. Rhea asks her not to lecture her.

Aaliya tells that maybe Ranbir finds her beautiful. She asks Rhea to listen to her carefully to know her plan, she can’t stop the plan once she executes it, it will ruin Prachi’s life forever. Rhea wants to ruin Prachi. She asks Aaliya to tell the plan. Aaliya takes some time off and goes. Lakshmi takes care of Dida. She tells that she will make kada for her and get it. Ranbir collides with Prachi. He asks her the reason for her rudeness. She tells that he isn’t so innocent. She pushes him away.

Rhea meets Aaliya to know her plan. Aaliya tells that the plan isn’t reversible. Rhea asks about the plan. Aaliya asks her to wear gloves first. She shows the dangerous colours, which will burn Prachi’s face. She tells that Rhea has to wear gloves while applying the colours. She asks Rhea to go ahead if she wants Ranbir to dislike Prachi. She tells that Ranbir will start hating Prachi, he will run away from her when her face gets ruined. She asks Rhea to take her revenge. Rhea asks Aaliya if Prachi’s face will get damaged forever.

Aaliya asks Rhea if she wants Prachi’s face to get saved and Ranbir to return to her. She asks if Rhea has sympathy for Prachi. Rhea tells that she hates Prachi, but she isn’t sure of the plan. Aaliya asks her not to complain that Ranbir is going close to Prachi. She reminds Rhea that Prachi has snatched her dad and then Ranbir. She tells that Prachi wanted to make Rhea leave the house. She asks Rhea to remember what she is going to lose, that’s Ranbir.

Rhea decides to make Prachi suffer. She tells that Prachi won’t be able to see her face now, Ranbir will turn away seeing Prachi from now. Aaliya asks her to apply the harmful chemicals to Prachi and discolour her life. Rhea agrees to her. She wears the gloves and puts her hand inside the colours. Her finger gets burnt. She tells that the gloves had a hole. Aaliya asks her to imagine Prachi’s pain when the colours get on Prachi’s face. Rhea is ready to give terrible pain to Prachi. She asks Aaliya to get other pair of gloves.

Reviewed Rating for Kumkum Bhagya 14th March 2022 Written Update Prachi in danger: 3/5 This rating is solely based on the opinion of the writer. You may post your own take on the show in the comment section below.