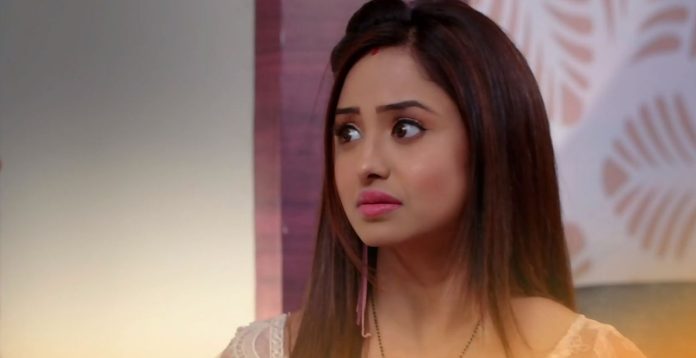 Kumkum Bhagya 28th March 2022 Written Update Rhea out Rhea tells Prachi that she isn’t able to understand anything. She asks what are Prachi and Shahana saying about the Shivratri night. Prachi replies that she will explain it in a simple way. She tells that Rhea has added the tablet in Ranbir’s thandai deliberately to make him lose his senses, so that Rhea can take an advantage of him. She tells that Shahana had tested the tablet and now they have the results, after eating that tablet, a person doesn’t stay in his senses and goes numb and sleepy. She tells that nothing would have happened between Ranbir and Rhea when he passed out before Rhea approached him for their first night plans. She tells Rhea that she can’t fool her by such lies.

She shows her faith on Ranbir and believes that he is innocent. Rhea is shocked to realize that Prachi has dug out the truth with the help of Shahana. She tries to deny Prachi. Prachi is clear with the facts and tells Rhea that she is going to tell the same facts to Ranbir. Rhea worries that she will fall in Ranbir’s eyes if he learns about her big lie. She wants to stop Prachi at any cost. She is tensed that Ranbir is already suspecting her move. She doesn’t want Prachi and Ranbir to clear the misunderstandings and unite. What will Rhea do now to save herself from Ranbir’s wrath? Keep reading.

Earlier in the show, Ranbir and Prachi’s equations start changing. Ranbir finds her changed. She tells that she is just the same. He asks her what would he do if Rhea eats from his plate. He understands her jealousy. He tells that he wanted to thank Rhea when she hid about Shahana’s pregnancy. He asks what would have happened if Rhea exposed Shahana’s truth. She tells that Rhea had created a drama by playing a prank first. He asks her to support him and trust him. He liked it that Prachi felt bad seeing Rhea with him. He wants Prachi to trust him completely. He decides to prove that she means a world to him. He wants to get Prachi back in his life. Prachi so wishes that Ranbir proves his innocence.

Ranbir tells Prachi that he wants to win her trust back and show that she is precious for him, he doesn’t want to just get her, but get her faith. He tells that he felt glad seeing Prachi’s jealousy. He asks if he is hurrying to prove his innocence. They get into a moment. He tells about the conflict between heart and mind. He wants to be with Prachi. Prachi stays silent. He tells that he feels like he exists when she is with him, he feels desirable and wanted just because of her.

Ranbir gets ready for his office. Rhea asks Ranbir if they can go out for dinner. He asks her why is she behaving like his wife. She tells that she is his wife, he can’t hurt her this way. He asks her not to pretend and act, Pallavi is not around. She asks him not to pretend when Prachi is not around. She tells that Prachi always creates a scene when she sees them together. She adds that his behavior has changed since the day she had insulted Prachi. She accepts her mistake and apologizes to her. He clears to her that they have no relation and can never have such. She asks him why is Prachi jealous seeing him, they have a relation.

She tells that they are married, he should accept that they are still close friends. He tells that Prachi just has a misunderstanding about them. She reminds that he is kept Shahana’s pregnancy a secret and even she has kept it a secret for his sake, they are partners and understand each other. He thanks her for that. He tells that he is getting late and he has to leave. He realizes that Prachi is seeing him with Rhea and is feeling jealous. Ranbir likes the fact that Prachi isn’t able to control his emotions. Prachi recalls Ranbir’s words. She gets into an emotional dilemma.

She knows that Prachi is really a nice girl, she is the best in every relation, Ranbir is also a nice person, a very good husband, he fights for his wife. She asks Prachi not to make Ranbir’s struggles more tough. She takes Ranbir’s side. Prachi tells that she won’t come in anyone’s words, she has to become a good mother than a good wife, she has to think about her baby first, its her responsibility and goal. Prachi meets Rhea, who shows a wide smile on her face and taunts her. Rhea asks Prachi why doesn’t she want to talk to her. She calls Prachi jealous. She asks Prachi why is she trying to charm Ranbir. She tells that she had seen Prachi serving the breakfast to Ranbir.

She asks Rhea to wake up, Ranbir wasn’t in his senses after having the spiked drink. Rhea denies the blame of spiking the drink. Shahana tells that she has got the pill cover in the bin, and got it tested. Rhea tells that she doesn’t understand anything. Prachi tells her that she knows that nothing happened between Ranbir and Rhea. She adds that Ranbir is innocent. She rebukes Rhea for attempting to take an advantage of Ranbir. She tells that the pill is tested, the person who takes it doesn’t stay in his senses, Rhea is fooling the family by telling a fake story. Shahana tells that they got to know the entire plan and now Rhea has failed. Prachi asks Rhea to stop right away and not do anything.

Reviewed Rating for Kumkum Bhagya 28th March 2022 Written Update Rhea out: 5/5 This rating is solely based on the opinion of the writer. You may post your own take on the show in the comment section below.