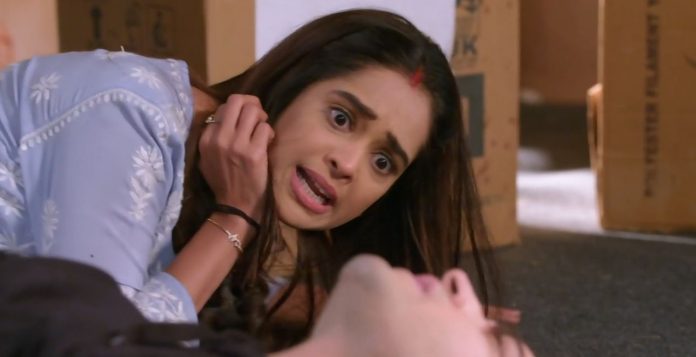 Kumkum Bhagya 22nd April 2022 Written Update Ranbir shot Prachi gets accused by Nick. Ranbir doesn’t believe it. Nick’s goons arrive there to his rescue. Rhea turns the suspicion over Prachi. She makes sure that everybody suspects Prachi. Aaliya also comes out in the open. She tells that she has come being concerned for Rhea. While the family drama of revolving suspicion goes on, the goon shoots at Prachi, clearing the statement made by Nick that Prachi had hired him for the attack on herself. Ranbir grows worried for Prachi’s life. He runs to save Prachi. Ranbir gets shot by the goon. The entire Kohli family, Prachi and Rhea receive a huge shock seeing Ranbir’s arm shot and bleeding. Ranbir falls down. Prachi also falls along with him and shouts Ranbir. Rhea didn’t hire the goons to put Ranbir in danger. She gets panicking for Ranbir too. What will happen to Ranbir? Will Prachi break her pregnancy news to Ranbir in the most critical moment? Keep reading.

Earlier in the show, Aaliya had asked him to name Prachi as the boss. Nick asks them if Ranbir will believe the illogical thing, Ranbir will ask him why would Prachi do this. Ranbir really asks Nick is he mad, why would Prachi do this. Nick tells Ranbir that Prachi has done this to get his attention, she wanted Ranbir to become her protector, she feels alone without Ranbir. Nick gives instances that Prachi had saved him. Ranbir asks Nick why did he kidnap Prachi. Nick puts the blame of the entire plotting on Prachi. Ranbir tells that Prachi can never do this, its impossible. Prachi stands shocked by the accusation.

Ranbir tells that Prachi can’t get herself attacked. He asks how does Prachi know him. Nick lies that Prachi knows him through Preeti, she is close to Preeti who introduced him. Nick recalls Aaliya asking him to get Prachi killed, like it looks as an accident. Nick has already called Tony to get Prachi killed. He keeps on lying to Ranbir that Prachi is the mastermind. Prachi asks Nick did he go mad to name her. She asks who has done this. Rhea asks Prachi to say the truth when she is already caught. Shahana tells that Rhea is lying, Prachi is innocent. Tony arrives there and points the gun at Prachi.

Ranbir turns and sees Tony shooting at her. He shockingly pushes Prachi and comes in front. Ranbir gets shot. Prachi, Rhea and the family are shocked to see Ranbir shot. Prachi remembers Ranbir’s madness for her. She knows that he helplessly loves her. Prachi and Kohlis run to Ranbir, who faints down. Rhea sees his blood on her hands. Dida feels a bad omen and gets scared. Pallavi shouts and asks Ranbir to open his eyes. Aaliya didn’t plan this and grows worried. Dida calls Vikram to know if everything is okay.

Dida is shocked to know about Ranbir. She cries for Ranbir. The family rushes Ranbir to the hospital. Vikram asks the nurse to admit Ranbir immediately. He fills the form. Ranbir doesn’t leave Prachi’s hand. Prachi asks doctor if she can come inside, she is his wife. Doctor tells that its not allowed. She tells that Ranbir wants her to come inside and be with him. He tells that its just muscle reflex. He doesn’t allow Prachi in the OT. Prachi cries for him. Pallavi asks nurse to get Rhea treated by a general physician. She asks Rhea to go and get the checkup done. Rhea tells that she wants to stay with them. She doesn’t want to get adamant like Prachi and create disturbance in Ranbir’s treatment.

She swears to not leave Prachi if anything happens to Ranbir. She rebukes Prachi and tells that she is the reason for Ranbir’s condition, he had gone to save her, its his fault. She warns Prachi. She tells that Ranbir is mad for Prachi, he shouldn’t get punished. She fakes her love in front of Pallavi. She tells that she would have died for Ranbir. She can’t tolerate Ranbir’s pain. Pallavi consoles Rhea. Prachi goes to console Pallavi, who asks her to stay away. Shahana tells that even Prachi is in pain. Rhea asks her to stop the drama. Rhea tells that she wants to stay with Ranbir, she isn’t in pain, she is totally fine, she won’t die if she bears some pain, she has to be with Ranbir, once he gets fine, then she will be fine too. Pallavi tells that Ranbir will be okay. Rhea hugs her. She runs away from there.

Pallavi looks for Rhea. Prachi stays there to see Ranbir. She cries for him. Rhea borrows a phone to call Nick. She learns that he is hiding in Kohli house. Dida feels helpless that she can’t go to see Ranbir. Nick sees Dida and hides. Rhea leaves from the hospital. Pallavi also blames Prachi for this. Prachi recalls Ranbir and her past moment when he cried seeing an emotional movie scene. He calls her heartless to laugh on such a scene. She tells that it’s a romantic movie, a couple gets separated in few movies, their love gets eternal, sometimes incomplete is complete. Ranbir tells that he doesn’t think so, if the couple was alive and were in love, then they would have lived happy forever.

They both disagree on the love story. He tells that his love is much bigger than the famous lovers, their love will be complete, its their true love and it will always be in their hearts. She tells that true love is always incomplete. He tells that he will have a full-fledged love with her. she tells that when a wife gets upset, then a husband convinced her, love gets more by the fear of losing, there is beauty in incomplete love also. Ranbir tells that he will also have incomplete love for her happiness, he will die for her sake and then always love her. After the flashback ends, Prachi cries and tells that their love will not be left incomplete, nothing will happen to him. She calls him mad.

Pallavi comes back to see Ranbir. She tells Prachi that this would have not happened if Prachi didn’t plan this. She accuses Prachi. Dida doesn’t see Nick in the house and thinks to leave for the hospital. Nick goes to drink some water. Aaliya catches him. She asks what is he doing here. Nick tells that he has come to take money and also Preeti. He asks her to return Preeti to him. Rhea also reaches home. She also hides from Dida. Dida leaves from the house. Rhea tortures Nick and asks how did he get Ranbir shot. She wants an answer. Pallavi asks Prachi to answer her, why did she do this. She cries for her son. Prachi asks Pallavi not to blame her.

Pallavi tells that Prachi has ruined Ranbir’s life, she separated him from family too, she is a curse on his life. She asks her if she hired Nick to get Rhea kidnapped, did she want to get Ranbir killed. Prachi asks her not to say such things. Pallavi asks Prachi to listen to her and get away. She tells her pain that’s caused because of Prachi. She tells that Prachi can’t understand the pain of a mother, she can never experience such pure emotions. She angrily curses Prachi. Shahana asks Pallavi how can she curse another mother. Pallavi tells that Prachi isn’t a mother, she can never become a mother because of her deeds. Prachi is left traumatized by her curse.

Reviewed Rating for Kumkum Bhagya 22nd April 2022 Written Update Ranbir shot: 3/5 This rating is solely based on the opinion of the writer. You may post your own take on the show in the comment section below.