Kundali Bhagya 16th May 2022 Written Update Rishabh returns Karan gets drunk and drives the car. He tells Natasha that Preeta always hurts him and breaks his heart, he has loved her a lot, but she has hurt him too much. He regrets that he loves Preeta. Natasha asks him to see the truck coming and shouts to alert him. Karan and Natasha get scared and think of meeting an accident. Preeta gets suspicious about the intruder sending a note to Sherlyn. She goes to Sherlyn’s room to check the note, and comes across Prithvi and Sherlyn’s conversation about Rishabh. Prithvi tells about the don he had hired to tackle Rishabh. The don blackmails Prithvi and demands a huge amount of 50 crores. Preeta is shocked to hear Prithvi stating 50 crores. Preeta wants to find out the truth behind the mystery. Will she find out about Rishabh? What happened with Rishabh? Do you want Rishabh’s character to return? Keep reading.

Earlier in the show, Someone enters the house secretly. Preeta asks the guards to catch that man. The man throws a stone at Prithvi’s room and also some note. He runs away. Preeta fails to catch him. She thinks what did that man throw in Sherlyn’s room. Prithvi sits drinking in his room to relieve his pain. Sherlyn reaches there in a panicking state. He asks her the reason for the panicking. She hands over the parcel and tells that someone had thrown it in her room, it has his name written so she has got it for him. He is shocked to read R on it and tells that its R for Rishabh. He tells that the don has sent this, they had hired the don for Rishabh. Kareena and Kritika ask Preeta why is she screaming. Preeta tells that someone had entered the house. They don’t believe her. She thinks its no use to tell them anything. She heads to check the thing thrown in Sherlyn’s room.

Prithvi gets a note in the parcel. Sherlyn quickly plays the CD. Preeta enters Sherlyn’s room, and doesn’t find her or the parcel. She sees the broken glass pieces. She tells that her doubt was right, that intruder had thrown something in her room. She gets the same grease marks on the floor and thinks Sherlyn had picked the parcel. She goes to find Sherlyn. On the other side, Natasha brainwashes Karan against Preeta. She finds him really upset. She tells that she doesn’t like to see him upset. She advises him to talk to Preeta, then maybe his anger and pain gets less. She asks him to stop drinking.

She tells him that he had changed a lot after Preeta came back. She adds that even she liked to see the new Karan. He cries and tells that he loves Preeta a lot, but she always hurts him, she broke his heart. He regrets that he loves her so much. She asks him to drive carefully, or stop the car. She tells that they shall get down the car and have a talk. They meet with an accident when he sees a speeding truck. He stops the car and goes to argue with the truck driver. Karan is drunk. The driver scolds him. Karan tells that the truck is huge, the car would have got badly hit. The driver calls the police and informs about the accident. The people see Karan and comment on him. Natasha defends Karan.

The man scolds Natasha. She asks Karan to scold the man. Police reaches there and stops the fight. The driver tells that Karan is drunk. Constable asks Karan and Natasha to come to the police station. Prithvi and Sherlyn see the CD video. They see Rishabh in the jail. She tells that she wanted Rishabh dead, if the family knows about him then.. Prithvi asks Sherlyn to stop it. Preeta thinks where did Sherlyn go away, did the man intentionally send the parcel to Sherlyn or throw it randomly. She thinks to go to Prithvi’s room and find out. Prithvi tells Sherlyn that she is talking strange things. She calls him stupid. She tells that she just talks practical things.

They see Rishabh in the video. Sherlyn worriedly locks the door. She resumes the video. Inspector tells that Rishabh was caught in the drugs scam, he can never get freed, it’s a serious offence, he is punished, he is going to get hanged after seven days. Sherlyn and Prithvi are shocked to know this. They get the news from their informer. The media is at the police station. They see Karan drunk and brought to the police station. They stay back to get some sensational story for their promotion. Karan tells the Inspector about the accident. Inspector tells that it’s a crime to drink and drive.

Natasha lies that she was driving, Karan was sitting beside her. She tells that they were returning from the party, it was not her mistake, the truck driver is at fault. She apologizes to the driver. The driver tells that Karan was driving. She tells that she was driving, she is Karan’s would be wife, she had a fight with him, she was upset. She goes on lying. Karan asks her when did they fight. Preeta gets the same grease marks on the wall. Prithvi tells that he doesn’t know what to do. Sherlyn asks him what was written on the paper. Preeta reaches their door. Prithvi tells that its written that he will get a call from a random number. He receives a call. He gets to talk to the goon about Rishabh.

Reviewed Rating for Kundali Bhagya 16th May 2022 Written Update Rishabh returns: 3/5 This rating is solely based on the opinion of the writer. You may post your own take on the show in the comment section below. 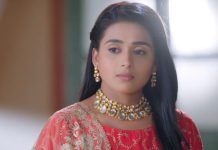