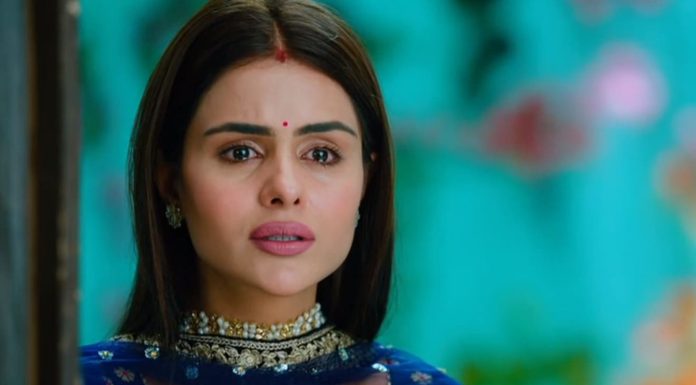 Udaariyaan 3rd August 2022 Written Update Chaos for Virks Gurpreet reminds Jasmine that she was going to Canada with her child. Jasmine tells Gurpreet that the situation is different now. She also tells Gurpreet that now the Virk family and Tejo need her child more than her. Tejo gets emotional overhearing all this. Nimmo asks Jasmine why she is helping others now, as she is the same person who troubled many people for fulfilling her dreams. She asks Jasmine if Yash ran away. Jasmine rudely tells Nimmo that she doesn’t need to be tense even if Yash would have run away.

Before Nimmo could say anything to Jasmine, Gurpreet angrily stops her. Jasmine asks Gurpreet if she thinks that she is such a stone-hearted person who can’t even give a small happiness to Tejo. She tells everyone that Tejo did much for her till now and now she also wants to help Tejo. Jasmine tells Gurpreet that she won’t let this opportunity go from her hand and will do whatever she will be able to do. Hearing this an emotional Gurpreet blesses Jasmine. Jasmine says she knows that many people don’t trust her but all this doesn’t affect her. She also says that she doesn’t think that she needs to prove herself to anyone.

Jasmine says she has decided to stay at Virk house from now onwards. She also says that Amrik’s child will take birth at Virk house only with the elder’s blessings and his/her maternal aunt’s love. Gurpreet hugs Jasmine. Even Fateh’s grandmother emotionally hugs Jasmine. Fateh suspects Jasmine’s words and behavior. Jasmine recalls overhearing Satti explaining to a crying Tejo that to become a mother, one needs to have a heart like a mother. She also explains to Tejo that to become a mother one needs to have the following qualities, like raising up a child, making a child successful and loving the child like a mother, giving a child a motherly affection. Satti tells Tejo that she already has all the qualities of becoming a mother.

Satti tells Tejo that Lord Krishna was Goddess Devaki’s biological son but even today Maa Yashoda is considered as his real mother. She explains to Tejo that a mother who raises a child (foster mother) is greater than the mother who gives birth. Satti asks Tejo to think about Fateh’s adoption decision. Tejo tells Satti she may agree to Fateh’s adoption decision but what about the Virk family? She also tells Satti that Gurpreet wants the heir of her house from Fateh only. Tejo asks Satti how Gurpreet and other family members will agree to her and Fateh’s decision of adopting a child. She also asks Satti if she thinks that Gurpreet will accept anyone else’s child or blood as her family’s heir.

Satti tells Tejo that when the little adopted kid will address her and Fateh as “Mummy-Papa”, run behind them in the whole house and hug everyone with his/her arms, then everyone will hug him/her back and will forget that the adopted child is not their own blood. She tells Tejo that Fateh will make everyone agree for adoption and will never let her feel that she can never become a mother. This information stuns Jasmine who overheard Tejo and Satti’s whole conversation. Flashback ends.

Fateh’s grandmother blesses Tejo. Tejo walks to Jasmine and hugs her. She tells Jasmine that she doesn’t need to sacrifice her dreams for her. Jasmine asks Tejo if only she can make sacrifices for others. She also asks Tejo to let her also feel how it feels to help others. Jasmine says she wants to try this. She tells Tejo that she will have to take care of her and her child. Jasmine says her child’s whole responsibility will be taken by Tejo. Unaware of Jasmine’s evil intentions, Tejo agrees to take full responsibility for Jasmine’s upcoming child. Whole Virk family gets happy with Jasmine’s decision except Fateh.

He sees Jasmine with suspicious eyes. Jasmine signs defeat to Fateh. Fateh pretends to be happy for Tejo and his family. He hugs Tejo and decides to keep Tejo and everyone safe from Jasmine’s evil intentions. On video call, Simran tells Buzzo that the mysterious caller has photographs of each and every moment of theirs. She asks Buzzo to return home quickly as she is feeling very scared. Buzzo tells Simran that he will try to reach home as soon as possible. He also tells Simran that his father has left all work on him and a tender needs to be filled today only, otherwise they will have to bear a big loss.

Simran tells Buzzo that it’s fine. She asks Buzzo to complete his work as soon as possible and return home quickly. Buzzo instructs Simran to keep all doors and windows shut and don’t let Candy go outside the house. Simrans moves her head in okay. At Sandhu house, Satti tells Rupy that she can’t understand Jasmine. She says earlier Jasmine got adamant on marrying Yash and shifting to Canada but now has decided to stay in Virk house. Rupy tells Satti that he is feeling suspicious of Jasmine’s real intentions. He says after hearing that Jasmine will stay at Fateh’s house, is making him remember their old days ruination.

Rupy says that he can’t trust Jasmine even a bit. Hearing this, Satti gets tense. At Virk house’s terrace, Jasmine dances in happiness. At Sandhu house, Rupy tells Satti that according to him that Jasmine isn’t that great that she will change herself for anyone. He says Jasmine thinks about others, when some of her selfish or evil purpose is getting fulfilled in it. Rupy tells Satti that he is sure that Jasmine has some selfish motive behind helping Tejo and Virks. Satti asks Rupy how he can think so wrong about his own daughter. Rupy tells Satti that he is Jasmine’s father, and knows hers very well. He says Jasmine is surely playing some evil game.

At Virk house’s terrace, Jasmine feels happy thinking that now everyone will dance to her and her baby’s tunes. Fateh recalls Jasmine’s fake sweet words and feels angry. He decides to always keep a watch on Jasmine. He feels a little relaxed and happy when Tejo gives him ginger tea. Fateh shares his tea with Tejo. Tejo and Fateh start drinking tea from the same plate. Tejo tells Fateh that she is very happy with Jasmine’s decision. She says Jasmine filled love and so many expectations in everyone’s hearts. Fateh tells Tejo that he wants to know what is going on in her mind. He also tells Tejo that he knows that she will love Jasmine and Amrik’s even more than her real child.

Fateh further tells Tejo that he still wants her to think about adoption. Tejo tells Fateh that she will go for adoption too but wants to take care of Jasmine for some months. Fateh and Tejo decide to together solve this and all problems. Tejo informs Fateh that she is going to Simran’s house as Candy forgot his favorite toy at their home. She says she will also talk to Simran about why she seems tense these days about Candy. Fateh tells Tejo that Virk’s life (Tejo) is back and no problem can trouble anyone in her presence. Tejo smiles cheerfully and hugs Fateh. Fateh leaves for his match, while Tejo reaches Simran’s house.

Simran pulls Tejo inside her house. In front of Tejo, Candy requests Simran to let him play outside. Simran stops Tejo and tells her that she has punished Candy as he has turned extra naughty and goes alone anywhere. Tejo asks Simran to share her problem with her and the Virk family. When Simran shows reluctance, Tejo takes a scared Simran to Virk house. Later, at Virk house, the doorbell rings. Tejo opens the door and the mysterious evil man comes in front.

Fateh returns home and gets angry seeing Amanpreet. Fateh’s grandparents also arrive there. Amanpreet behaves cheaply with Fateh’s grandmother too. Fateh’s parents arrive and get stunned. While taking blessings from Gurpreet, Amanpreet touches her feet inappropriately. This angers everyone at Virk house. Khushbeer gets angry at Amanpreet for behaving cheaply. Mahi also comes there. Amanpreet behaves cheaply with Mahi too. Fateh’s anger increases seeing all this. He makes Amanpreet leave Mahi’s hand. Fateh asks Amanpreet why he came to his house.

He gets angry and grabs Amanpreet’s collar, when he talks cheaply about Tejo. Khushbeer stops Fateh. Tejo asks Fateh who Amanpreet is and why he is behaving insolent and cheaply with everyone. Amanpreet introduces himself as “Amanpreet Singh Bajwa”. He reveals that he is Candy’s real father. This shocks Tejo. In the next episode, Amanpreet will try getting Candy. Tejo will question Amanpreet that by what right he is claiming to be Candy’s father, that too after 5 years. Amanpreet will again behave cheaply with Tejo. Amanpreet will also ask Buzzo to check his and Candy’s DNA reports. Later, Jasmine’s friend will invite her for a party. Jasmine will agree and thinks to convince someone to let her attend her friend’s party.