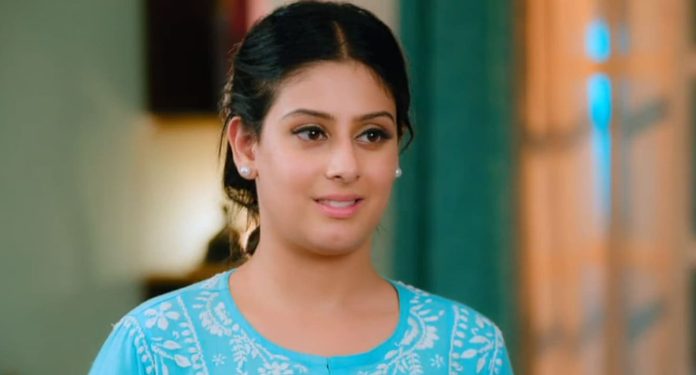 Udaariyaan 8th August 2022 Written Update Jasmin’s big lie While sitting in the car, Tejo recalls police taking Simran away. Mahi and Gurpreet reach the police station to meet Simran. Seeing bad and evil criminals in prison, Gurpreet wonders how Simran would be staying between all of them. Gurpreet holds Simran’s hands and asks her to have some courage, saying that Fateh will soon bail her out. She tells Tejo that everyone including Rupy is trying to get her bail. Simran tells Gurpreet that she is worried about Candy. She says she is wondering how little Candy would be getting affected by all this.

On the other hand Candy, Fateh’s grandmother and Buzzo are seen praying to God. Tejo, Fateh, Khushbeer and Rupy reach the judge’s brother’s house. Rupy requests the judge’s brother to ask the Judge to get Simran a special bail. He assures the judge’s brother that Simran didn’t do anything. Rupy also reveals that Simran has a little son, who is waiting for her at home. Simran apologizes to Gurpreet and Mahi for unintentionally, once again creating so many problems for their family. Mahi tells Simran that she isn’t at fault in all this.

On the other hand, Rupy, Khushbeer, Fateh and Tejo reach Judge’s house. Judge asks Rupy if he wants to get Simran bailed out using his pressure of their power and position. He tells Virks and Sandhus that he is the person who follows rules and works according to them. Judge says nothing and no one is bigger than the rules for him. Khushbeer asks the judge to not say all this, saying that his daughter is innocent. Tejo recalls that she promised Candy that she will bring Simran home as soon as possible. Judge stands up and tells Khushbeer that he can’t do anything in this matter.

This tenses up everyone. Outside the police station, Mahi asks a crying Gurpreet to handle herself. Gurpreet asks Mahi how she can handle herself seeing all her children in trouble. She says her one son can’t ever become a father, one son died and a daughter is now in prison. Gurpreet suddenly starts worrying about Jasmine and her grandchild. On the other hand, Dimple tries to stop Jasmine from leaving Moga. She asks Jasmine to tell the truth to everyone in her family. Jasmine tells Dimple that she has no option left with her. She says she can’t bear insults from Fateh or anyone. Jasmine says she can’t let anyone laugh at her, insult her or send her to prison.

Dimple asks Jasmine why Fateh will send her to prison, what wrong deed she has done. Jasmine rudely asks Dimple to leave her alone and not interfere in her life. Suddenly, Jasmine gets an evil idea in her mind after seeing a woman with a little baby in her hand. At night, Candy cries and runs in the whole house, saying that he wants to go to his mother. Buzzo and the Virk family tries to handle Candy. Buzzo tries to calm down Candy. Mahi tells Candy that she can make him talk to his mother on call if he will finish his food. Candy tells Mahi that he will eat only from his mother’s hands.

Simran comes and asks Candy to come to her. Candy runs and hugs Simran. Fateh’s grandfather asks Fateh how they got Simran bailed out. The Virk family learns how the judge initially refused to help them but later Tejo made him agree to help them. Flashback shows Tejo seeing the judge and his daughter’s photograph in graduation uniform. She recognizes the judge’s daughter and addresses her as Sanvi Kaur. Judge asks Tejo how she knows his daughter Sanvi. Tejo tells the judge that Sanvi was one of her students. She says she herself failed his daughter in college. Tejo says Sanvi used to just pass her time in college and never took her studies carefully.

She folds her hands and requests the judge to get Simran bailed out. Flashback ends. Simran thanks Tejo. She says she is scared that Amanpreet can use DNA reports to snatch Candy from her. Tejo and Fateh asks Simran to not be worried. Fateh says he knows a very good lawyer, who won’t let Amanpreet do anything wrong. Fateh and Tejo together leave to meet the good lawyer. In between the road, Fateh finds Tejo tense. He tries to cheer Tejo up by telling her that everything is fine now. Tejo tells Fateh that this silence is the silence which occurs before a big storm.

Fateh and Tejo decide to not feel weak or lose hope. Fateh tells Tejo that she is his strength and he doesn’t care about anything till she is with him. Suddenly, it starts raining. Fateh and Tejo start enjoying the rain. Fateh gets romantic with Tejo in the middle of the rain. They start dancing too. Fateh picks up Tejo and grows more romantic with her. They hug each other tightly. Suddenly, Amanpreet arrives and interrupts Fateh and Tejo’s romantic moments by breaking an alcohol bottle behind them.

Amanpreet starts flirting cheaply with Tejo. This angers Fateh and he raises his hand on Amanpreet. Before Fateh can break the law, Tejo stops him. Amanpreet keeps on using cheap words, cheap language and cheap actions to provoke Fateh. Tejo tightly hugs Fateh to stop him from attacking cheap and evil Amanpreet. Amanpreet laughs evilly and keeps on provoking Fateh using Tejo, Simran and Virk family’s name cheaply. Amanpreet’s evil and cheap friends arrive and help Amanpreet in provoking Fateh to do something wrong, so that Amanpreet can use it against Simran and Virks.

She asks Amanpreet to leave the thought of getting Candy as he isn’t worth being a father. Amanpreet asks Tejo to make him a father then. He keeps on talking cheaply about Tejo. Amanpreet says he will take Candy and whatever he wants for him with himself. Fateh once again pushes Amanpreet away from Tejo. Amanpreet tells Tejo that he has 24/7 watch on her as well as the whole Virk family. He leaves cheaply, asking Tejo to keep Fateh in control. Fateh angrily punches the bonnet of his car. Fateh and Tejo hug each other tightly in tension.

Later, Fateh and Tejo sit together in their room. Tejo tries healing Fateh’s injured hand with hot blows. She asks Fateh to understand that Amanpreet wants him to beat him, so that he can file a case against him. Tejo explains to Fateh that from next time keep control on his hands and anger, understanding Amanpreet’s evil tricks against them. Fateh tells Tejo that he fails to control himself, whenever Amanpreet speaks cheaply about her. Tejo asks Fateh to recall Simran and Candy’s face, whenever he feels angry. She explains to Fateh that one wrong step can ruin their lives, which they can’t afford. Tejo explains to Fateh that they will have to keep patience and bear bitter things.

Tejo and Fateh decide to hide whatever today happened between them and Amanpreet from their family. Mahi comes and tells Tejo that Gurpreet is getting tense as Jasmine hasn’t returned home and is not even picking up their calls. Fateh wonders what new drama Jasmine is doing now. Gurpreet confirms from Sandhus, if Jasmine went to them. Tejo’s grandmother tells Gurpreet that Jasmine didn’t come to Sandhu house. Mahi says she is suspecting that Amanpreet might have learnt that Jasmine is pregnant and would have done something. Fateh comes and asks Mahi to not scare Gurpreet saying all this. He says that nothing can happen to a woman like Jasmine.

Fateh says Jasmine doesn’t care about anyone and didn’t ask about Simran even once. He says Jasmine must be chilling with her friends and will return soon. At the same time, Jasmine returns to Virk house. Jasmine says her phone got switched off and she didn’t even get a taxi. She says that she returned from getting wet in the rain. Jasmine asks Tejo about Simran. She fakes care about Simran. Fateh asks Jasmine where she was the whole day. He also asks Jasmine why she didn’t return home if she really cares about Simran. Jasmine says she couldn’t have done anything in Simran’s matter, so was giving company to her alone friend, whose brother just died.

Fateh still feels suspicious about Jasmine’s answers. Jasmine doesn’t let Tejo help her in changing clothes, when the latter offers the help. Tejo finds Jasmine’s behavior suspicious. Later, Jasmine gets angry at Tejo for entering her room without her permission or knocking. Tejo tells Jasmine that she brought food for her. When Tejo tries touching Jasmine’s stomach, Jasmine doesn’t let Tejo touch her. She feels scared that her truth might get revealed. Gurpreet comes and says that Jasmine’s stomach’s size will increase and get heavy as many of her pregnancy months have passed. Tejo says she doesn’t know which month of Jasmine’s pregnancy is going on.

Tejo and Gurpreet decide to accompany Jasmine for the next ultrasound. Jasmine feels scared. She doesn’t let even Gurpreet touch her stomach. Jasmine sends Gurpreet and Tejo outside her room. Tejo feels suspicious of Jasmine’s behavior and wonders if Jasmine is fine. Jasmine too feels scared seeing Tejo getting suspicious of her behavior. As Tejo and Gurpreet leave her room, Jasmine takes out her fake pregnancy belly belt. She decides to be careful of smart Tejo.

Reviewed Rating for Udaariyaan 8th August 2022 Written Update Jasmin’s big lie: 3/5 This rating is solely based on the opinion of the writer. You may post your own take on the show in the comment section below.