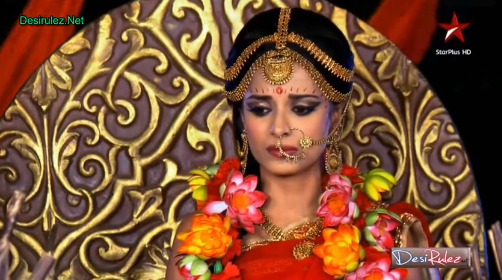 Last written was about Draupadi getting married to the Pandavas. That did not happen yet in the show. Arjun dressed up like a Brahmin won Draupadi by hitting the fish’s eye. Draupadi was happy to know that he is Arjun, one of the Pandavas. When Arjun brings her home, Kunti asks Arjun to share whatever you brought with your brothers, unknown that he brought his to be bride with him. Thus, Draupadi is in dilemma that she has to marry all the five brothers to obey Kunti.

When Drupad, her father comes to know about this Adharma, he brings Draupadi back to his palace and asks her not to think what people will say as it’s a big Adharma to marry such. Draupadi misses Arjun when she sees a mandap. Ved Vyas finds a solution for the marriage and asks the Pandavas not to take Sanyaas as Yudhishtir has to serve the throne. Arjun asks Yudhishtir to marry Draupadi, but Yudhishtri thinks it will be unjust with Arjun and Draupadi. Ved Vyas asks the Pandavas to marry Draupadi on one condition, that she will be with her every husband for one year. Kunti realizes her big mistake and regrets of spoiling Draupadi’s life. Lord Krishna seeing Draupadi’s hard test, promises her to help her under any circumstances. How can Draupadi divide herself and her love? Will Drupad agree? Keep reading.