Karan Johar welcomes the survivor superstar who have always made a mark with millions with fans – Akshay Kumar. Akshay enters and Karan hugs him and directs him to the couch. Karan says he is the man of the millions and with the millions, the man with amazing comic timing. 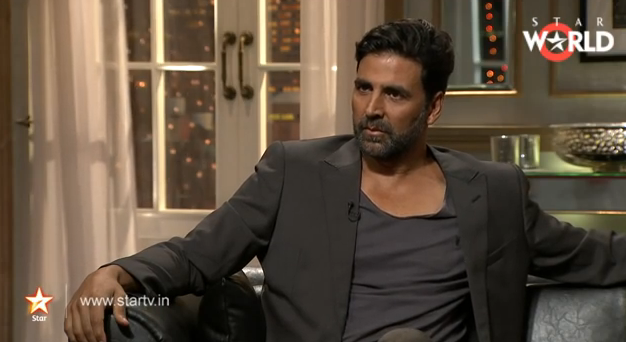 Karan: Why is it taking me so long to get you on this couch?
Akshay: Its very simple, when anyone comes on the show, you ask controversial questions, so nobody wants to be grilled and don’t want to answer anything stupid. I did not want to come on the show and meet you at my home. Why so much hassle? Its terrible. Its very bad to get into controversy. Why you want to do that?

Karan: I don’t believe anyone in the industry has a sense of humor. You are firing on me? Why you changed your mind and started firing me. You wife have asked you to do this.
Akshay: She was coming, but did not. I always tell her to be diplomatic, but she is like white is white and black is black.
Karan: What ever is in her mind she tells it.
Akshay: Even I know one more person like her, Anil Kapoor.
Karan: How did you fall in love with a girl like that?
Akshay: I love Anil Kapoor also.
Karan: She is completely different, I love her.
Akshay: We are different, poles apart, we keep on discovering things about us. She told one of my producers that he made a shit film and I lost one producer, he did not sign me again.

Karan: Everybody spoke about you on this show. I shot with you for the first time at 6am, why do you torture people like this by waking so early.
Akshay: I am surprised that you call this a torture. Its an old saying that who wakes up at night is an owl. When do you sleep Karan?
Karan: You are firing me again Akshay.
Akshay: A man should sleep early and get up early. I do all my work in the morning, I drop my son to his school. There are some rules in the house which we follow.
Karan: Your wife is from the film industry, did you ever think that why you married her, thinking about the complex she gives.
Akshay: Ya, she tells her my parents have these awards with them, did you win any National Award.
Karan: Have it every bothered you?
Akshay talks about his movie Special 26.
Karan: What about critics on India, have they been kind to you?
Akshay: Yes, they have been kind, they called my acting a piece of furniture, its fine to read that about you, what can you react.
Karan: You have been a producer’s actor always, but why did you do not be the same for Farah Khan’s Joker?
Akshay: I have nothing against Farah. I have not done anything wrong with that film. I have never spoken wrong about anyone. I am not made like that.

Karan: You believe Silence is dignity?
Akshay: I believe.
Karan: Have you washed your image of a Casanova? Are you ashamed of it?
Akshay: No, I was not married, there is nothing wrong to have romance.
Karan: All your priorities changed?
Akshay: Definitely.
Karan: I am trying to ask you what do you do after pack up?
Akshay: I have my children, and I wish to get back to them. Do you want to come next to me and ask? 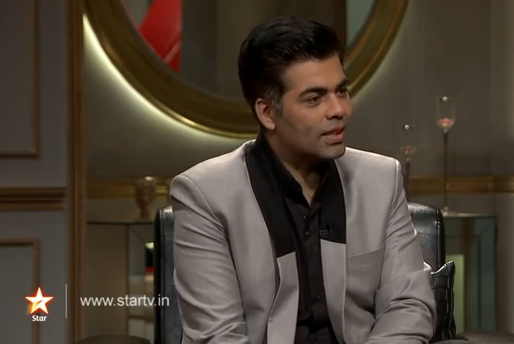 Karan: No, I am not saying that, just trying to find out.
Akshay: Go ahead, I am having fun.
Karan: I am telling you your wife always said wonderful things about you. I met her in boarding school. She asked me to run from the school and gave a motivations speech to run away from school. The watchman caught me and took me to the principal. The principal made me an example infront of everyone and Tina just turned. I loved her, she is the only woman I love. You live with such kind of a woman.
Akshay: She acted with me in 2 movies and she did 13 movies. When I told her lets get married, she said if Mela does not work, we will marry, and thankfully it did not work and she said yes to me.
Karan: You should have thanked Aamir.
Karan: Salman came on this show and said you are the only actor who has shown growth.
Akshay: I saw that and I am grateful he said such good words about me, I am touched, thank you.
Karan: Its rare in our industry to get such things to hear from contemporaries.
Akshay: I always remember his dad is fond of me, he asks me to show my films to him. I always have to call him and ask him to watch my movie which movies I am proud of.
Karan: Where do you see yourself as a movie star, we have many people everyone having a place, do you see yourself in the number game.
Akshay: I don’t see myself in the number game. What are we competing about? I just do my work. The bigger producers have not given me any film. I gave hits with newcomers. I had no choice.

Karan: Right, you created a brand yourself. In professional and personal zones, you are completely sorted.
Akshay: I have got everything I imagined. You just have to be with your parents, rather than going to temples. It happened to me just like this. This is my formula.
Karan: That’s why they say when you have a good mother, you don’t need a therapist.
Akshay: You don’t need anyone.
Karan: Lets see what some women tell about you.
Ekta Kapoor, Kareena Kapoor, Shraddha Kapoor, Lara Dutta and Sonakshi Sinha speak some really good words about Akshay and his early working habit and cheating in cards game.

Karan heads towards the rapid fire round with Akshay Kumar.
Karan: Women find Akshay Kumar sexy because?
Akshay: He can unbutton himself in public.
Karan: Who is best suited to following titles: Boss – Akshay: Amitabh Bachbach
International Khiladi? Akshay : Anil Kapoor
Garam Masala? Akshay: John and Ranbir
Joker? Akshay: Me
Karan: What do you have which the following don’t?
The Khans? Akshay: Height
Ranbir? Akshay: Experience
Hrithik? Akshay: Abs
Karan: What is Twinkle’s best quality and most irritating one?
Akshay: Her best quality is she is beautiful, most irritating is she is always right.
Karan: The most weird rumor about you?
Akshay: That I m gay.

The rapid fire ends. Akshay says next season come out with something else, rather than rapid fire. I am going to grill you for the first time without the hamper, if you pass this, I will give you something.

Akshay: Let us introduce a manipulated hero, I will give you a gift, I think you did brilliant.
Karan: I will not give you this hamper. 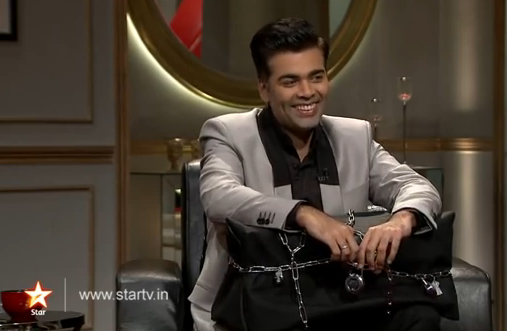 Akshay and Karan have a laugh. Karan says you have really tortured me, I felt I called a principal on my show. Take this hamper now. Akshay says I have really enjoyed the show. Karan gives him black bag, lock and a chain as present saying it signifies his sex life. Akshay says I will also give you such a gift showing I am happy. Akshay praises Karan and the show ends with him signing the coffee mug.