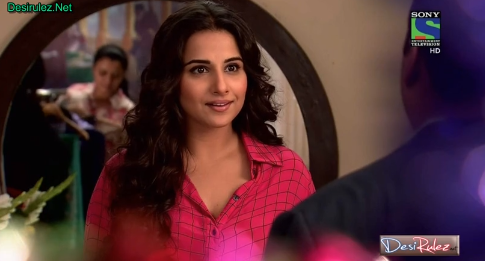 Recently Ram and Priya went on a official trip to Delhi. They think to sort out their differences but eventually end up fighting. They try their best to stay with each other and behave like a teenager. Their sweet arguments are a laughter dose. Ram’s best friend Vikram doesn’t know the reason behind Ram’s changed behavior. He gets curious to know about him. He comes to know about an employee in Ram’s office to whom Ram is getting attracted. Vikram is unaware that Priya is Ram’s employee. Vikram opines that Ram is having an affair in his office and shares his doubt with Priya.

Priya doesn’t understand Vikram’s statement fully and goes to confront Ram. She didn’t know that Vikram is talking about her as she is the mystery employee of Ram. Priya sees Ram with a lady and gets mad at Ram. She thinks never to forgive Ram if he is proven guilty, but she turns out to be film star Vidya Balan who comes to promote her film Shaadi Ke Side Effects. Ram compliments Vidya. Priya gets jealous and thinks Ram has never been romantic with her. Later, Priya and Vidya bond well and dance together in the party. Keep reading.