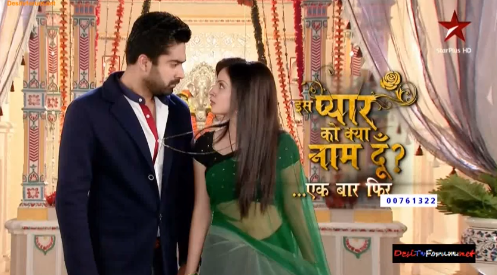 Aditi plans to kill Astha and take revenge from Shlok. She wants to see Shlok dying every moment and wants to eliminate his love Astha from his life. Aditi comes with Shlok and Astha for an outing. She makes plans to kill her but fails. She suggests Shlok to take them for horse riding. Shlok agrees. Meanwhile Kalindi gets worried about Astha. Avdhoot calls Astha and gets relieved knowing she is fine.

Shlok, Astha and Aditi come for the horse riding. Astha sees the beautiful place and shouts Shlok ! I love you. Shlok thinks her behavior is childish, even though he is falling in love with her more and more. Aditi goes to the horse trainer and selects an impulsive horse for Astha. Horse trainer makes it clear that only a trained person can sit on the horse. Aditi lies to him saying Astha is a trained in horse driving.

She sits on the horse and asks Astha to sit on an impulsive horse. Astha sits and the horse gets mad. It runs with Astha. Shlok follows the horse on the other horse. He goes to save Astha. Aditi gets happy and says bye to Shlok and Astha. Both of the horses come back alone to the trainer. Aditi thinks they have died but Shlok will save Astha in a filmy style and will come back with Astha shocking Aditi. Aditi will make another plan to separate them. Keep reading.