Karan Tacker starts the show by saying we all are equals and cites example of our learning that was taught in our school. But with time we forgot our school lessons. Today’s episode of Halla Bol is connected with this. He mentions about North East and people from there are bullied as if they are not Indians.. People don’t consider them to be a part of India. The story of this episode is about Sana and her brother Tomba who comes to Delhi from Manipur for their studies. 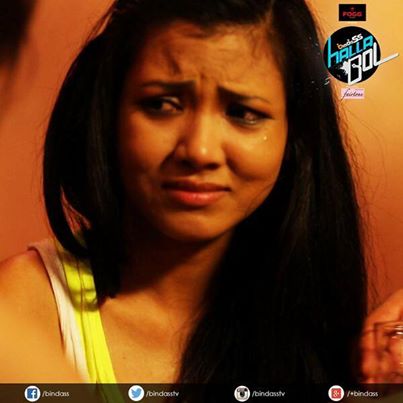 The story starts with both going in an auto and talks about not getting an appt on rent. Sana tells him not to worry and they would get an appt soon. Both comes to an appt seeking rent and is helped by a broker who mediates with the owners. He tells good about Sana and Tomba to them. At the same time, owner’s son and his friend starts glaring at Sana with bad eyes since she is wearing short clothes. The owner says that these people are not from Delhi and also there are so many problems. Thereafter, the son comes and suggests their family to give them the appt but his mother tells that Sana’s food are different and also they come home at odd times. Though, his father agrees after a bit persuasion and then the broker formalizes the contract and Sana gets a home.

Sooner then, Sana and Tomba comes to their new home and starts to settle down. The landlord’s son takes her photo without her knowledge. He then comes to the room without permission and gives Sana some drinks, and starts talking and when sana spoke hindi, he becomes surprised. Then, he starts to get close to her and also takes her mobile number. After this, he begins to keep an eye on Sana gazing at her body when she is in shorts.

Later on, Some boys outside near a shop tease them by calling names like jackie chan’s nephew. Sana goes to the shop and there the owner speaks to her with bad taste and also charges higher price. The boys further harasses Tomba and incites fight but sana stops. Sana reaches home and sees that the owner’s boy – Guddu telling her to watch english movies together. He says that its normal for her to drink as she is from North East. Sana pushes him to leave. On the road, Tomba is again harassed by the same boys, and they also abuse his sister. After hearing this tomba starts a fight and is then beaten badly by the boys. This trashing of Tomba is seen by the shop owner whose son is also one of the boys, but he chose to turn a blind eye. Tomba goes home and says to Sana that the same boys who teased them earlier at the shop have beaten him.

Thereafter, Sana comes to the shop and asks them whether the boys are their own. They respond that do not involve in this and let boy’s decide themselves. She argues that they everyday teases them and this is actually a crime. The father supports his son. She says she is from Manipur and an Indian like them. They don’t listen to her.

Karan Tacker (the host): Sana (University student) never thought that she will be bullied in this way being an Indian in an another city (Delhi) far from her parents in Manipur. She also didn’t realize the true intentions of Guddu – landlord’ son..

Sana suggests his brother to focus on exams and don’t listen to ongoing harassment and racism. Guddu is seen coming drunk to her room with his friends.. He says her to drink and enjoy with them. He says that she wears shorts and go to parties but does not mingle with him. He forces her to drink liquor, she slaps him..After receiving slap, Guddu becomes physical with her and she runs to escape from him and shouts for help while Tomba is being beaten at the appt, but nobody helps her. Tomba then comes and hugs her.

Karan Tacker (the host): Guddu is not alone in India, many people in India thinks that they can do anything with north eastern girls. Sana’s friends asks her to complain to police citing this can happen another time. Sooner then, the police comes to their appt, and says that they receive a complain about Sana running a sex racket. Police further asks more on it, Sana is shocked and her friends says it is not what the police thinks. The police checks Tomba identity card and warns them that they will come again if new complain is made and after that leaves. Sana’s friend supports them in this terrible time. After some time, Guddu comes to them and says police came because he made a false complaint as she didn’t listen to him. He tells from now on everyone in this area will believe what he says to them. He says his parents are coming tomorrow and once they know, both Sana and Tomba will be out and also will not get any other appt.

Sana starts to pack her bag as she cannot take it anymore. Tomba says that nobody should come from North East and he plans to go back and even suggest her to shift to the University hostel. Sana remembers – her words to Tomba on first arrival, other people’s harassment, and Tomba’s words after thrashing. She tells him that he will not go and she will fix this mess.

Karan Tacker (the host): they are bad people everywhere, but sana didn’t got support from anybody in this city because they think her as an outsider.

Sana plans to counter people’s perception about her. She goes to shop owner’s wife and asks her to give some traditional clothes that she can wear.. She then goes to other shop owner, and asks for money so she can do cosmetic surgery for looking like them. She slaps them by words. She then goes to another man and asks how she would get acceptance ? and again cite surgery, traditional dress. She did this so as people will realize their mistake. She encounter the same owner discussing about his son being beaten up in some foreign country. She again reiterates to them that she is being discriminated in her own country.

Sana goes home and discusses about their legal stay in appt as there is 1 month notice time. She says that contract is legal and they will not leave the house.. Sooner then, Guddu comes and tells them to leave as he got his father’s approval. Sana replies that there is 1 month notice mentioned in the contract and she will not leave. Guddu and friends pushes them out of the appt. After seeing this, unexpectedly the shop owner and other men come forward to support her and apologizes for not respecting her before. The men clarifies that the Guddu has only harassed her as they are witness to it and Guddu only lodged a false complaint to malign the girl and only the girl is right, and Guddy is wrong. Guddu argues with them and says the girl is cheap and bad character. Sana responds that all people know about her and him and today they stand up for her. She says that every person needs respect. She says if they look different, that does not mean they don’t deserve respect. Guddu’s father slaps him on hearing this and apologizes to Sana and Tomba. Guddu’s father blames his son and asks her what punishment she wants to give to him. She goes there and slaps Guddu heavily. The people there claps appreciating her bravery, spirit and truthfulness.

Karan Tacker (the host): Sana faced sexual harrassment and also racism from Guddu. If this happens to even one person, then this might lead us to loosing trust in humanity.

Neha Marda actor (Urmi from Doli Armaano Ki) speaks about her friend who was being teased as she looked like chinese to them, and even bullied in different ways during her commute with autorickshaws. Neha and her friend didn’t accept this behavior and they went and spoke with the auto people. She thinks it’s time we need to change and treat all as equal and be nice.

Karan Tacker (the host): If we don’t treat all Indians equal, then how can we expect good to happen to us in foreign countries where racism and other social issues are also present. We need to change and girls don’t need to suffer from this ill treatment. Don’t be silent, stand up, raise your voice and say – Halla Bol, Change Aayega.. Hum Laayenge..