Karan starts the show by saying that the voice and call for one’s self-respect and safety is celebrated and heard on this show. When we were small, our parents used to fulfill our every wish, but just imagine yourself taking their responsibility. This happened to Divya and Ahana. Once their parents died in an accident, Divya took responsibility of her young sister Ahana and also took care of her family’s bakery in Mumbai. Divya became socially active and independent. Divya’s life took a big turn when her condition and situation both changed as she became a victim of Stalking.

Theme of the Episode: Fight Stalking

The story starts with Divya who is seen practicing kick-boxing at a fitness centre with her coach – Raghav. She does practice for 35 minutes non-stop and then receives a call from Ahana. Ahana tells her that somebody is there in kitchen and asks her to come home asap. Divya goes home with raghav to find a surprise from Ahana that is of her birthday being celebrated there with her friends. Ahana gives a gift (black dress) to divya that her future brother-in law has given her. After some time, Divya receives a call from her boyfriend – Varun. Then, Divya receives a blank call after raghav goes, and tells Ahana and friends that some unknown person is giving blank calls since last few days.

Next morning again divya receives a blank call on mobile. She starts to become tense. Sooner, some unidentified person leaves a bouquet at her appt and runs away. She goes to kick-boxing lesson and tells raghav about that unidentified bouquet. Raghav tells her to not worry about it and suggests practice for anger management, and even gives tips on using knees and elbows for inflicting maximum damage on a person who attacks her (if such a scenario happens).

Divya goes to a hotel with Ahana and friends and her table is already booked by somebody. She finds her photos on the table with a letter – I love you. They run to find the person who has booked that table but fails to find him. She starts remembering the past incidents and also the mysterious person-stalker at her boxing class. Raghav suggests her to take shower to become relaxed, she then goes to shower, and finds a note in the bathroom with a comment about a body mark on her body. She goes to raghav and says somebody is inside the bathroom but he tells her to relax and not worry much. She then asks him to drop some things at her appt as she is going to meet a friend-Natasha. Raghav goes to her appt for that purpose and he also goes to her room with an evil smile on his face, and starts looking and feeling her clothes. He confesses his immense love for her and starts speaking to himself and remembers about divya’s partner- Varun. He tells that varun cannot love her and he cuts the dress (gift) given by varun to divya as a sign of his displeasure and hatred. 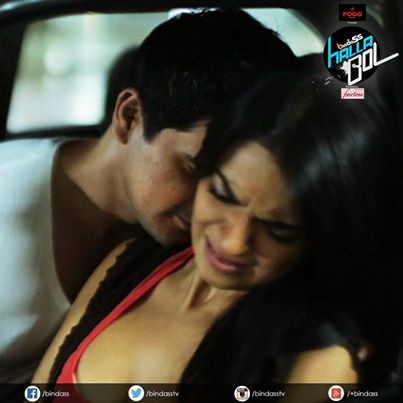 Divya comes home later and sees somebody sitting on a chair and thinks as Ahana, and then starts to freshen up. She calls Ahana for some help but to her surprise finds Ahana sleeping. She now knows that some other person was there before in her appt. She calls Raghav about that stalker and expresses the danger and her fear, and he shrewdly speaks and supports her. Raghav tells that he will be always with her. He comes to divya’s home and and while she is making coffee, he expresses his love. Divya becomes shocked on hearing this and now knows that raghav is the stalker. She remembers all the past events. He confesses his deep love to her but divya pushes him and doesn’t listen. He tells her to leave varun. He says that he is not afraid of police since he didn’t do any big crime yet. And even if he gets arrested, he will be out soon and will find her. He then takes a knife and cuts his hand with a knife and warns her to leave Varun as this is good for her, varun and Ahana. He says that everything will be good if she listens to him. He reminds her to tell him ‘Yes’ for his proposal as he doesn’t like a ‘No’. He then leaves promising to hear her positive answer soon. Ahana then comes out and sees raghu’s blood on the floor. They then decide to go to pune to run away from this mess.

As they are leaving, Divya forgot to lock the door, and goes again to lock it. Sooner then, she hears a scream from Ahana. She goes outside and starts looking for Ahana but doesn’t find her. Ahana is taken away and kidnapped by raghav. He calls her to take care of him and only then Ahana will be fine. He wants her to marry him for the sake of Ahana’s safety, she hesitantly agrees. He tells her to meet at some mall. Divya’s finds Ahana’s personal diary and starts reading..there she finds Ahana’s encouraging words about her and remembers Ahana. She informs Natasha and reaches mall. Natasha and friends also come there with police in civil dress. Raghav reaches there in a car with Ahana and instructs her to come in his car and doesn’t enter the mall with her. They go in a car and the police who were waiting inside the mall to capture him, is now seen running to follow his car.

Raghav takes her to some parking place and starts kissing her. She pushes him when he forces her. She tells Ahana to activate car’s safety horns for the ones located in the parking place. The cars starts producing horns, and Raghav runs away after seeing the security guards approaching him. Then, Divya decides to chase him, also the security is also seen running towards him. While divya is running, she remembers Ahana’s inspiring words about her, and then hits raghav hard on his back from behind. She uses kick-boxing as her attack weapon and also use elbows and knees since they cause maximum injury. Raghav is seen battered down and the police and security staff comes and arrests him. Both sisters hug each other as the danger from raghav is gone.

Karan Tacker: Divya beat raghav with her will-power and will-power can do wonders in such situation and salutes divya’s spirit.

Krystle D’Souza (guest on the show -Sakshi from Ek Nayi Pehchaan, Sony TV) speaks: She tells about her friend who was being stalked by a man whom her friend got acquainted at a party. She threatened to him about informing police and only after that he stopped harassing her. She informs about the law – IPC Article 354 on stalking, which states that it is a punishable offence with upto 3 years imprisonment and/or fine.

Karan Tacker (the host): Karan speaks about Anti-rape bill that was passed in 2013 after Nirbhaya’s gang-rape in Delhi. In that law, Stalking has been termed as a legal offense. Karan says that being a a man, he doesn’t understand, Why somebody harasses a girl ? Why to mentally torture her? There is no option but to take a legal action for the girl. Why is it so difficult to accept ‘NO’, ‘love is by choice, it cannot be forced’. Karan signs off by saying – Don’t be silent, stand up, raise your voice and say – Halla Bol, Change Aayega.. Hum Laayenge..