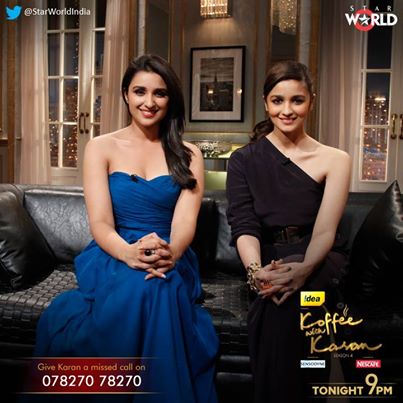 Parineeti comes with a big sigh and says finally she came. Karan says that he started the show 9 years ago, and she responds that she was around 16 yrs old when she first saw the show.

Karan reminds to her how he has seen her and other actors (ranveer, anushka) for the first time in Yash Raj studios, and after some time came to know they are becoming actors and signing films with Yash Raj films (YRF). Karan says once he told her as an outsider in a film industry. Parineeti speaks on how she first she got a break for Ladies Ricky Behl movie and also she worked in marketing dept at YRF and also worked as a celebrity manager for Rani Mukherjee. She got selected with a 3-movie deal with YRF after auditioning for a Jab We Met scene – Geet scene, though she was initially unaware of her selection.

Karan: Asks about her relationship with the director Manish Sharma.
Parineeti: responds that she respects Manish and Aditya chopra a lot, and it is wrong to link her with manish.

Karan: How about the sibling rivalry ?
Parineeti: She tells there is an age difference of 6 to 7 years between Priyanka and her. And even, priyanka used to take her for a troll when she was a child donning the hat of a Nanny. Parineeti discloses her nickname – Tisha and Meemi is the nickname of Priyanka.

Karan: Asks about her love life?
Parineeti says that she will be in love with someone this year.

Karan briefly speaks about Alia to her and also brings the competition that people are thinking about them these days ?
Parineeti: Alia will be her future style guru (stylist)

Karan then welcomes Alia Bhatt by saying- gorgeous and future stylist of Parineeti.

Karan says that he got both of them together because of popular demand on social networking sites.

Karan: Is this unncessesary vibe referring to competition rumours between them ?

Alia: People are saying to her during Highway movie promotions – Can two actresses be friends? And she cleared those questions..

Parineeti: says she also got the same questions, and she even clarified to those people and says she share cordial relations with Alia and both have a good camaraderie.

Alia: Comments on Parineeti weight loss.She is good when she is her own and she looks her best.. 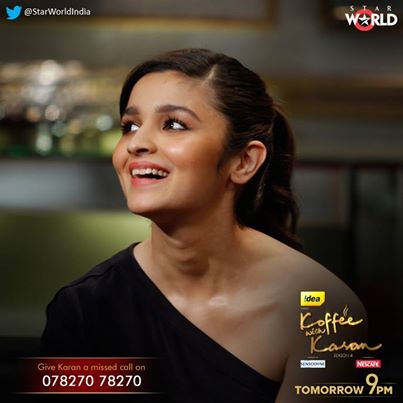 Karan: You shared on-screen space with lot of men ? Sense of possessiveness for Sidharth Malhotra and Varun Dhawan?
Alia: She says both Sid and Varun like her more than they like Parineeti

Karan: Talks on contemporaries.. Feeling of awe..? Do you have a awe-struck moment ?
Parineeti: Speaks on her upbringing. She never shared and stayed with Priyanka in her house. Even now, she gets awe struck moment when she meets people like Sr. Bachchan.

Karan: Celebrity crush?
Parineeti: Saif Ali Khan and she loves him truely and even told Kareena about it.

Alia: Alia loves Ranbir kapoor. She spoke a lot with Ranbir when both talk for the first time and still wants to marry him

Karan: Is it really important to have a boyfriend, Do you bother to be single ?
Parineeti: Yes, she would need to have a boyfriend
Alia: Yes boyfriend is needed specially when she wants to have holidays. Valentine day is overrated according to her.

Parineeti: She had relationships but they didn’t worked out, and now she is single ..Alia says she is a liar and parineeti says it was only Gossip that she spoke with Alia.

Family members: Priyanka and Mahesh Bhatt speaks
Priyanka: Speaks on Parineeti’s (Tisha) dedication that she saw on karwa chauth and then believed at that time that Tisha will become a hindi movie star.

Mahesh Bhatt: Cites about the late actor Smita Patil. He recommends his daughter to be with people like Parineeti. Parineeti will drive the best from her. You have an intellect that is very awesome.

Priyanka: She says both are talented. Advises them – Be yourself to get more fun. Remember your roots, keep family your side, and nothing will put you down.

Parineeti starts with a disclaimer and takes on oath on the hamper and says she may be mean only for the hamper..

2 people who will compete for her swayamvar (practice of choosing a husband)?
– Kamaal R. Khan (actor) and Bradley Cooper

Hypothetically, one women with whom she can experiment besides Alia ?
– Deepika as she is hot

What Products will be endorsed by this people?
– Sonam kapoor – telephone thing with unlimited talk time

How would you react if a senior actor makes a pass on you ?
Saif?
– Yes to everything

Marry, hookup, and erase from memory
– Marry: Arjun Kapoor because he is a very nice guy.
– Hookup with Siddharth Malhotra
– Erase: Ranveer singh because she loves deepika

In one word react to people,
who comment on her weight ?
– Wait and watch

people who comment on her fashion sense?;
– Speak to Alia

one thing that she has which her contemporaries don’t?
– She has the act in actress

Next director that she wants to work with ?
– Karan Johar

Karan ends the rapid fire round with Parineeti and starts with Alia:

Who would you most likely to meet at a rave party?
Alia: Prateik Babbar

At a gym?
– John Abraham

Worst dressed man?
Ranveer..as he is experimenting sometimes its a good, and sometime is a mess, but its gutsy

Idea that changed your life ?
– Alia and Parineeti going to Karan’s show

a person for romantic date?
– Ranbir

have your ever kissed and regretted?
– yes

Have you been ever been hit by a co-star?
– Yes

What you will find in their Bedroom?
– Varun: Picture of himself
– Sidd: his dog -Oscar

Dir you want work with next ?
– Raju hirani

Before the Koffee quiz..karan announces the winner and the winner by a tiny margin is Parineeti chopra..

Some questions from the quiz:

Who is the chairperson of Indian National Congress?
Parineeti replies Sonia Gandhi

Both were tied, and Karan asks them a tie-breaker question to choose the quiz winner.

name of actors who worked with Dharma Productions and essayed the character of Naina, 3 characters?

Karan thanks them for coming and also wishes them more power and super success in 2014, and they both signs off by signing Koffee mugs !