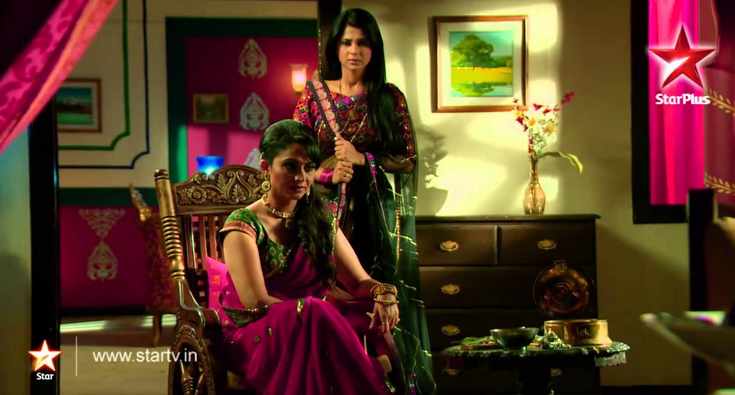 Kumud was going to be made Umrao Jaan by Sunanda who was keen to make her take Ghuman’s place. Kumud denied to wear the clothes offered by Sunanda for her dance show and told her that she would prefer dying rather than giving up and agreeing to her dirty demands. Kumud meets another dancer – named Kusum and she reminds her of Kumud’s sister Kusum. Kumud emotionally connects with her and gets her help to escape from Sunanda’s clutches.

Kusum asks her to fool Sunanda by showing her that she is agreeing to her demands and will do as she says. So that Sunanda does not doubt on her further and make her movements free in the Chandni Bazaar. Kumud agrees with Kusum as the later promises to help her run away and get free from Sunanda. Kumud tells Sunanda that the clothes need alteration. Sunanda calls the tailor and sends Kumud to his shop for her fitting measurements. Saras is still wandering in the Chandni Bazaar trying to find Kumud with the help of Majnu.

While Kumud is being taken to the shop, Saras and Kumud have a hit and miss type as they do not see each other though they were so close. Later on, Kumud is left alone for the trial and she sees a light coming from the door. She locates a door behind the cupboard and finally runs out. Will she get back home safely? Will Sunanda bear to lose Kumud who was her golden chance to take revenge from Ghuman? Will Saras spot Kumud before Sunanda does? We hope the evergreen lovers find each other and we get to see some uniting moments!! Guess what will Jugnu do, who was madly in love with Kumud and wanted to marry her being struck by her beauty and simplicity. He will be heartbroken when he finds his love has escaped. LOL!! We wish Saras and Kumud get back home shocking Ghuman!!