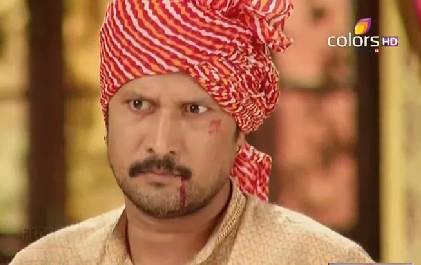 Ratan Singh saved Mannu from blood cancer by donating his bone marrow, but he made Ganga agree to his conditions. He asked for a big price from Ganga in exchange of Mannu’s life. He asks her to give Mannu back to him for life. Even though Ganga couldn’t let her son go to his criminal father, but the circumstances forces her to accept his condition. She decides to give Mannu to Ratan Singh after the operation. Before the operation, Ratan Singh makes Jagya signs on the legal documents stating that he will not have any right on Mannu thereafter and he will not file any case on Ratan Singh for Mannu’s custody.

Jagya signs on the documents unwillingly. Ganga being a loving mother gets sad thinking about the day when Mannu will go back to Ratan. All the family members get shattered and couldn’t overcome the fact that Mannu will be leaving them soon.Jagya asks Ganga to get ready as they have to handover Mannu to Ratan’s Parents infront of Ratan in Jail. They go to Jail to give Mannu to Ratan. Ratan looks at his son. He changes his heart at the last minute. He refuses to take Mannu’s custody as he don’t want his son to follow his footsteps and becomes criminal. He tells everyone that he was happy yesterday thinking that Mannu will live with him, but his perception changed after what he have seen.

Ratan sees his friend Gunjan’s son getting arrested on the charges of theft and murder. Gunjan confronts his son Shankar about committing a crime when he kept him away from criminal environment. Shankar slaps Gunjan, saying he is responsible for his present status as he walked on his footsteps. Ratan Singh gets shocked. He doesn’t want Mannu to do the same thing which Shankar did. His parents try to convince Ratan, but Ratan is adamant on his decision. He wishes Mannu to live a respected and good life, therefore he requests Ganga and Jagya to give good upbringing and values to Mannu. Well, Jagya and Ganga will surely be happy with Ratan’s decision. All the family members will be happy with Mannu’s return as they had shed a lot of tears for him.