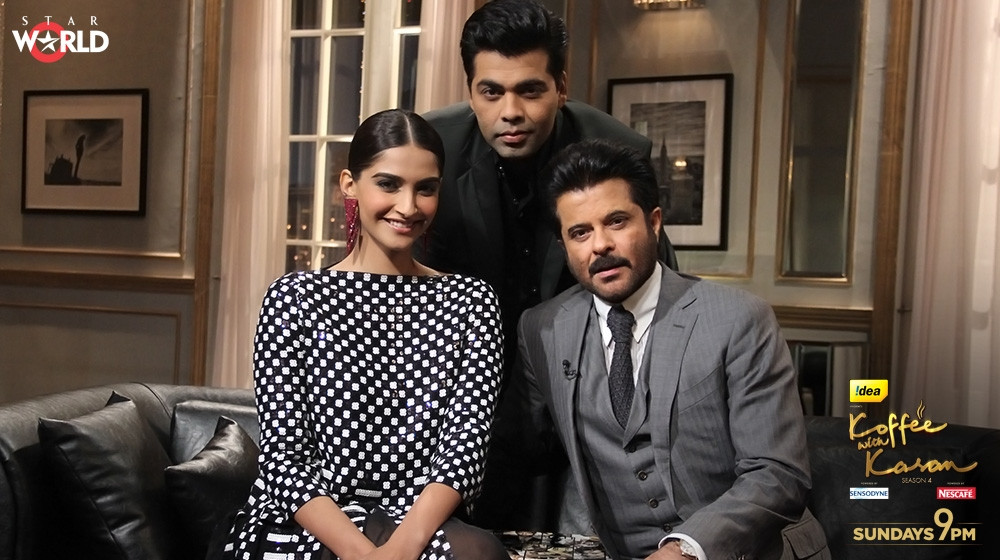 Karan introduces father-daughter duo- Anil and Sonam Kapoor by saying: tremendous actor, movie star with great dignity, celluloid celebrity both nationally and internationally, and then says about Sonam – she is gorgeous, leading fashionsta, actress with 2 recent back to back hits referring to Raanjhana and Bhaag Milkha Bhaag, most glamorous father-daughter duo in the business.

Anil Kapoor goes and sits in Karan’s couch..and pulls Karan’s leg a bit and after that karan speaks first about Anil refusing an Abbas-mustan movie offer where Anil was supposed to play a father’s role, the movie was Players. Anil Kapoor does not agree to that point of Karan’s even though Karan told Farah Khan has told him about this news. 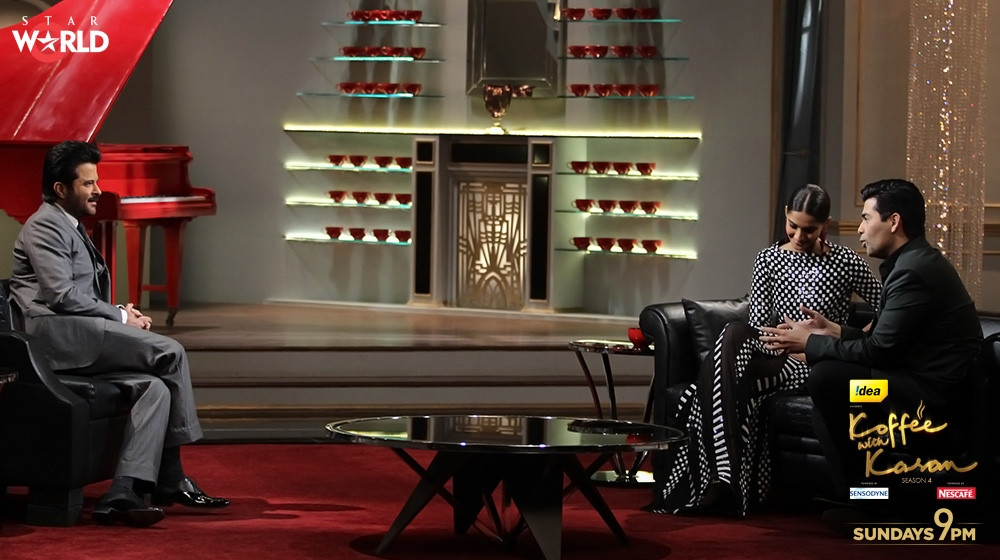 Karan: Are you happy to come with your daughter ?
Anil: He says he is nervous because he doesn’t know what she will speak. He also says that he didn’t watched Sonam’s last KWK appearance.

Sonam: briefly speaks her experience of working with Rishi kapoor and cites a good experience,

Karan: Asks Sonam about her fashion sense? Does it excites her ? Does it make you nervous?

Sonam: She says all the biggest movie actors in the world are known to be fashion icons and gives some names of popular actresses – Audrey Hepburn, Marilyn Monroe, Meena Kumari, Rekha and they’ve set trends always. Her movies – Raanjhana, Bhaag milkha bhaag, and other movies have shown her as girl next door which she is happy about.

Karan: Does it bother not to be labeled equivalently well in the acting department ?

Sonam: If you’re not good looking then they think you are a good actor. Anil jumps in and says that this is right. He speaks on his own experiences and also says that veteran actors Dilip kumar,..Kader Khan were initially dismissed as not good looking but they were excellent and the best actors of our time. She says she survived in this industry because of critics – khalid mohammed, Rajeev masand,..

Sonam: She says after playing varied roles like Bittu in the movie Delhi 6, she knew much better understanding of movies and acting. Loud acting is considered good Acting, loud doesn’t mean anything..Its not acting. Anil speaks that Shahrukh and Salman were initially being commented often. He cites people used to refer to SRK’s hamming dialogues. He supports Sonam’s point of view.

Sonam: She says there are good reasons why Sanjay Bhansali, Rakesh Mehra, Anand Rai have worked with her and she has a good Hindi dialogue delivery..

Sonam: People make art (parallel) films. why they don’t make actors good looking in those films ? She considered classics like DDLJ and Maine pyaar kiya of her liking..She calls herself an icon and she is happy to be an icon in her 20’s. Karan gets a laugh on hearing this as she herself tells her to be an icon.

Karan: speaks on Anil’s recent TV show 24 on Colors TV and complements him on that show.. Anil thanks God for a good reception for his maiden TV show..

Sonam: Says that Television is not an idiot box. Everybody is watching movies on TV even world premieres of movies are premiered just days after their release in cinemas. Further says that rubbish reality shows are doing well..And tells that Karan will also cast her in his movies because of their friendship and also she is talented.

Karan: Asks Anil what products does he use to remain good looking ?
Sonam: says that her mother takes care of her father well and also the mother keeps a tab on his food and other things.

Karan; Anil, Are you scared of your wife ?
Sonam: Everybody is scared. There was no rumors because her father used to call her mother 20 times a day.she tells with a laugh

Sonam: She says she is single and don’t have boyfriends. She only has friends, and wants to keep her personal life private. Anil appreciates her on this. 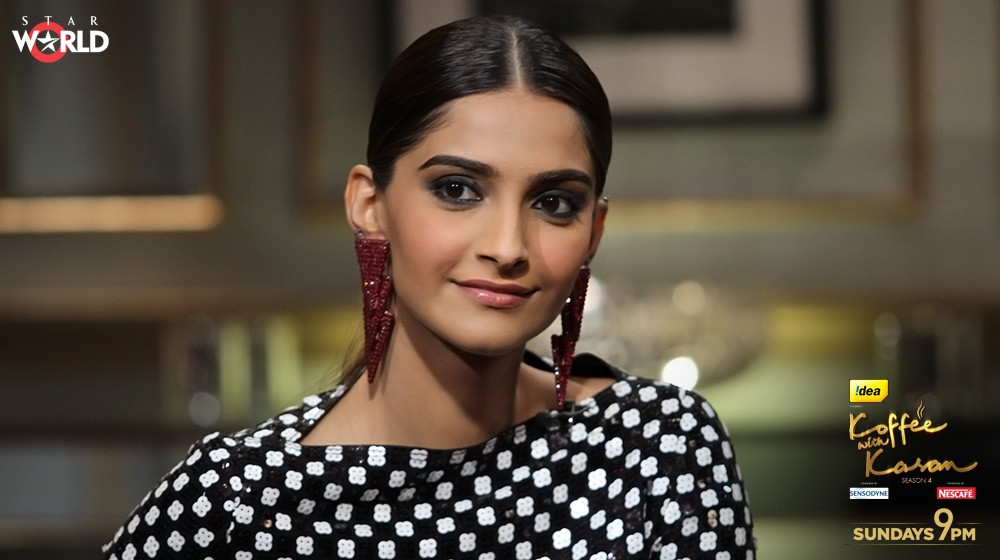 Anil: Most of the things that Sonam got from his wife, and upbringing…

Karan: what kind of father he is? does he give support to her on heartbreak situations?

Sonam: He is a real cool father. The mother is conservative more, she was a model..

Karan: Asks about general fashion sense ?
Sonam: Deepika has upgraded her fashion sense. Anaida shroff (fashion designer) has helped her..Katrina is herself not trying much..

Arjun Kapoor (actor): her cousin brother speaks
He talks on his fond memories with his uncle Anil Kapoor. He shares an experience when Anil was eating from his plate while both were watching Ram lakhan..anil chachu’s movie.

Arjun says that Sonam is an amazing Indian beauty, ethereal. They’ve also traveled also a lot. He says a peculiar quality of Sonam that she brings after her travel abroad. He says that Sonam carries the foreign accent along with memories after their travel. She even used Arjun as a protective guy to take with her when she went on a date. He talks about girls who speak about his uncle more than him.. He asks, Why? Asks his uncle, whether is he willing to play a father on screen ? or does he want to play his young brother ?

Karan: speaks that all Sonam’s brothers are protective about her.

Anil: admits that Arjun is looking good and better than him now.

Karan starts the rapid fire round first with Anil:

An Actress with whom he would want to linked with in his younger days?
Anil: – Rekha

If Unmarried, one actress who will be your romantic date?
– Scared, he even cannot dream about it

If you could turn 1 person for 24 hrs? Who will be, and what you do ?
– Aditya chopra.. Come out and enjoy in parties.

If you are a jury in an awards ceremony
Irritating song that you consider ?
– Khada Khada hain…song was shot with Juhi. Its a worst song. Both he and his co-star Juhi Chawla were upset with the song.

What he thinks about critics ?
– They don’t know about indian films.

Academy awards ?
– one of the greatest moments in his life

Cross-over films?
– When it will happen

If you woke up as Salman, What would you do ?
– He is unique, I cannot say much

Advice to Ranbir Kapoor ?
– He should get married and settled down

Advice to Arjun kapoor ?
– He doesn’t need his advice.

Rumour that he wants to spread about himself ?
– That he is not available..

Idea changed ur life?
– Meeting his wife Sunita. and the idea of being with her..

Stunning actress ?
Deepika, katrina, Kareena
– Katrina, as he has done a large number of movies with her and he knows her well.

Karan ends the rapid fire round with Anil and starts with Sonam:

One thing that the following persons have which she don’t ?

katrina ?
Sonam: Katrina kaif has 200 crore film to her credit

truth or dare, what would you do to the following persons ?

Farhan Akhtar?
– Never wear shorts, she apologizes to her father on saying this.

What you would find in a hard disk in a hidden directory of the following people?
Arjun Kapoor ?
– readings on diets

Who is the party starter ?
– Karan Johar

Who is mama’s boy?
Ranbir Kapoor

Why men find Sonam sexy ?
– Because of her smart mouth

In Indian film fraternity, who would be most likely to caught red-handed ?
– Ranveer singh. he is the worst liar.. He will not lie even to save his life..

Fashion advice that she wants to give ?
Parineeti ?
– Don’t wear tights..

Alia bhatt ?
– She should dress according to her age

Vidya Balan ?
– dress as herself. She looks nice

Deepika ?
– create your own style

Karan announces the winner and says that Sonam has won with ease and gives her the Koffee hamper. Karan then starts the Koffee Quiz:

Some trivia and questions from the Quiz:

Identify hindi movie names from their english titles.
God is Witness ? – Khuda Gawah
We will meet, We will meet ? – Milenge Milenge

Author and book on whose the movie – Slumdog millionare was made ?
– Anil doesn’t remember. He says he only remember himself..
Karan replies Vikas Swarup and says the book name is Q&A

Sonam wins the quiz and karan gives her the quiz hamper.

Karan thanks them for coming on the show and they signs off by signing the Koffee mugs. 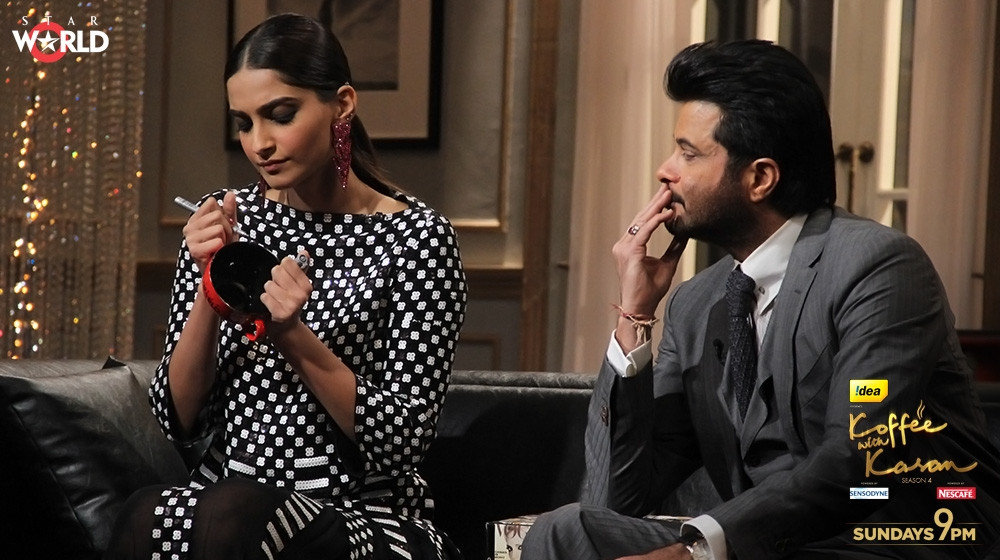